Well, since it’s Easter Sunday we figured it was appropriate to write about bunnies. But not just any bunnies.

No, what we’re talking about is twenty-foot tall spectacles that’ll light up night in all directions (and maybe even encourage a bit of social commentary).

It’s called Intrude and it’s an acclaimed public installation created by Australian artist Amanda Parer that will be coming to Los Angeles starting on June 5 as part of a four-city U.S. tour that kicks off in New York starting this April.

According to the official press release the installation features “monumental sculptural rabbits, each sewn in white nylon, inflated and internally lit.”

So how exactly does that look in real life?

According to a description on the artists’s website Intrude is intended to highlight the role of Westerners in changing the native space they that encountered.

While bunnies are a cute and inviting subject, they are used specifically to call back to the introduction of rabbits to Australia by settlers in 1788, an introduction that has been an ecological nightmare for the country:

“They represent the fairytale animals from our childhood – a furry innocence, frolicking through idyllic fields. Intrude deliberately evokes this cutesy image, and a strong visual humour, to lure you into the artwork only to reveal the more serious environmental messages in the work. They are huge, the size referencing ‘the elephant in the room’, the problem, like our environmental impact, big but easily ignored.”

The installation will be showcased at Arts Brookfield’s properties across the United States starting in New York and Houston in April and May before swinging by the city of angels on the third leg of the tour. 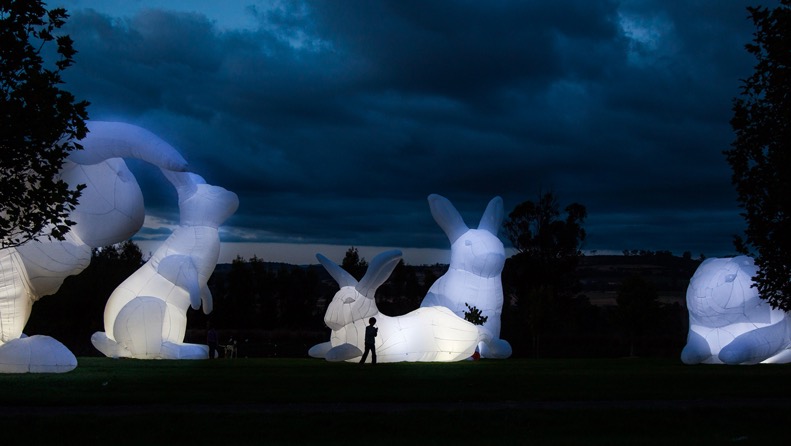 Intrude will be available for public viewing at three different downtown Los Angeles locations from Sunday, June 5 through Saturday, June 11.

The locations are as follows:

To find out more information about the project and the tour visit artsbrooksfield.com