Dust off those bicycle helmets folks because beginning July 7 the city of Los Angeles will officially launch Metro’s bike sharing program throughout downtown.

The upshot:  1,000 bicycles will be available for use at some 65 downtown L.A. locations including Union Station, City Hall, Grand Park, the L.A. Convention Center, South Park, Chinatown, the Arts District, the Fashion District, Little Tokyo and more.

Bike share stations will be placed within convenient proximity to the Metro Rail and Bus network, offering riders plenty of opportunities to combine bus/rail/bicycle services to reach their destinations.

“We are excited that L.A. will officially join the bike share revolution that is now giving city dwellers across the nation new ways to explore their urban communities,” said Mark Ridley-Thomas, L.A. County Supervisor and Metro Board Chair, per the The Source Metro Blog: “Marrying bicycle and transit trips will go a long way in supporting healthy lifestyles, easing traffic on downtown streets and, perhaps most importantly, getting Angelenos where they need to go in an efficient and affordable manner.” 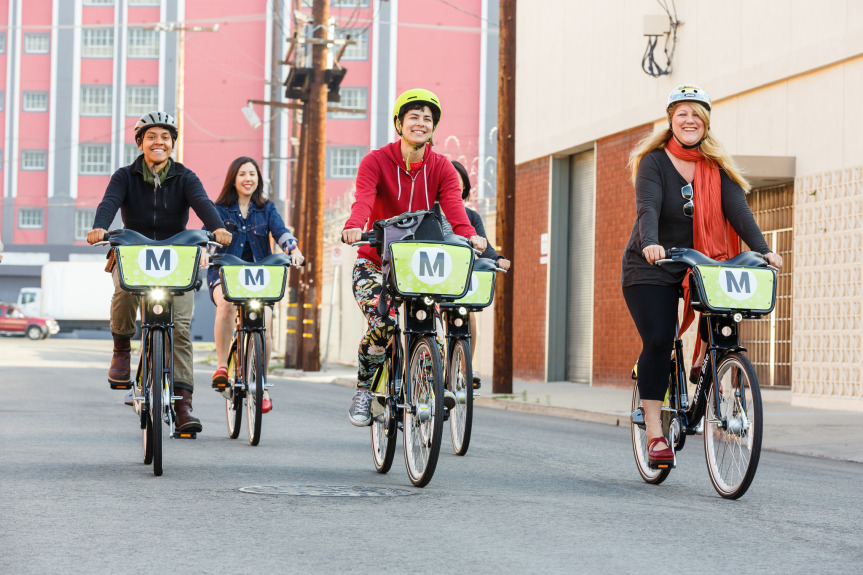 The launch of the program is noteworthy as Metro will become the first major transportation agency in America to offer a single card that allows access to both transit and bike share systems.

From July 7 until August 1, 2016 the system will only be accessible to pass holders, after which time the program will be open to all individuals, including walk-up customers. Early pass purchasers will receive a limited edition Metro Bike Share Kit and the first 1,000 people to sign up also receive exclusive Metro bike share pins.

The below video via Metro Los Angeles on YouTube breaks down the process.

There are three pass options available for purchase:

For more information and additional resources on the bike share program visit www.bicycletransit.com.