I’ve been a devotee of the goodness served up at Mexicali Taco & Co. ever since I had a job working in DTLA on Figueroa St., regularly haunting their shop to enjoy tacos and vampiros on my lunch break.

And while I’d heard legends of their seasonally offered carne asada fries, for some reason I’d never bother to order them.

Last night seemed like as a good a time as any to remedy that misnomer.

After working up a solid appetite hiking around the hills of Silver Lake for a good two hours I took a short trip east on Sunset, braving the bottleneck of traffic on Fig that was pouring on to the 110 freeway during rush hour (not the optimal time to go, but screw it).

The cashier who I ordered from smiled cheekily when I inquired if the fries would serve as a stand alone meal or if I should order a taco or two on the side.

“You won’t finish them,” she said firmly as her eyes scanned my thin frame. 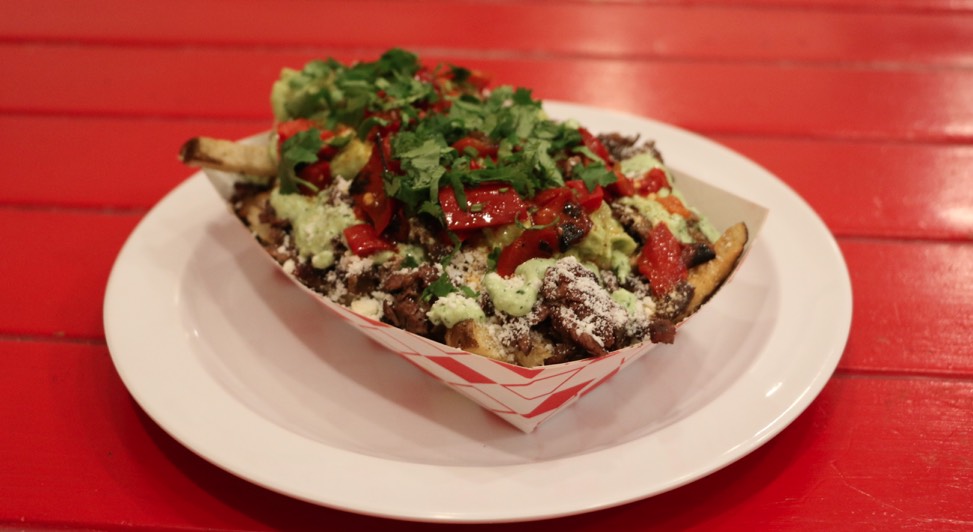 Don’t under estimate the density of this humble looking plate of fries. Credit: Brian Champlin / We Like L.A.

10 minutes later I received a rather unassuming paper carton of food resting on a simple white plate.

That’s it? No problemo.

Of course what I underestimated, what I suppose most will underestimate, was the density. Layers of fried taters, perfectly cooked carne asada, cheese, tomatoes, cilantro, and a healthy scoop of guacamole. It turned out to be one of the most delicious french fry adventures I’ve had this side of The Hat’s pastrami fries.

In the end I did manage to finish, although I may have taken a few weeks off my life in the process.

The fries cost just over $10 and I’d say they’d make an excellent option to share as a meal for those who don’t feel like gorging themselves.

The wait is over!! These babies will be ready starting tomorrow! The best #carneasadafries in town.

The carne fries are a seasonal offering that have been available since October.

I was told by an employee they’d would be on the menu for at least another month, but beyond that, there was no firm commitment.