Los Angeles restaurants are like L.A. itself- diverse, eclectic, a mix of high-end and casual and everything in between.

When first visiting the city you’ll probably find yourself eating at spots near tourists attractions (or wherever you’re exploring) but the local dining scene is a worthy adventure on its own merits.

In-N-Out is a must-try but there’s A TON more to us than a double-double and animal style fries.

Because of the multitude of choices available to Angelenos it feels like there are too many options and not enough time to check them all out so locals might want to add these to their foodie bucket list as well.

As with any food list there will be differing opinions so let us know in the comments which restaurants you think first-timers should visit.

Rundown starts below, in no particular order.

[RELATED: The 21 Best Places to Eat in Downtown L.A. Every Dedicated Foodie Needs to Try Once] 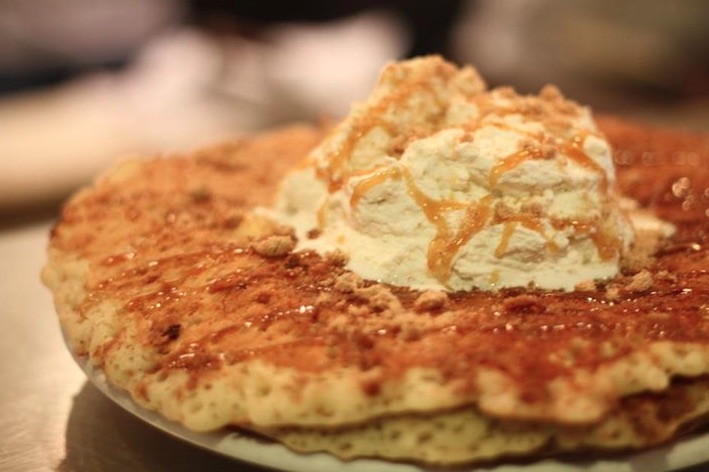 If you’re craving a pancake the size of platter and covered, drizzled, and/or stuffed with all kinds of sweets then look no further. Located on the Sunset Strip easily marked by the likely line of people forming outside the eatery, this brunch spot continues to grow in popularity since opening in 2000.  The menu is practically an ode to Willy Wonka with sweet concoctions like “The Golden Ticket” filled with caramel and streusel and then topped with whipped cream and even more caramel and streusel. Sure, they serve lunch items and beer but really, the pancakes are the stars.

Cronuts may come and go but a maple bacon donut is forever thanks to his DTLA eatery.  It’s not far from The Last Bookstore so after you’ve worked up an appetite scanning the aisles of one of the best bookstores in the States this is a must-try.  Donuts aside, the diner fare includes other high points like their pulled pork hash and corn cakes plus they serve homemade Pop Tarts because their baked goods are like no other. 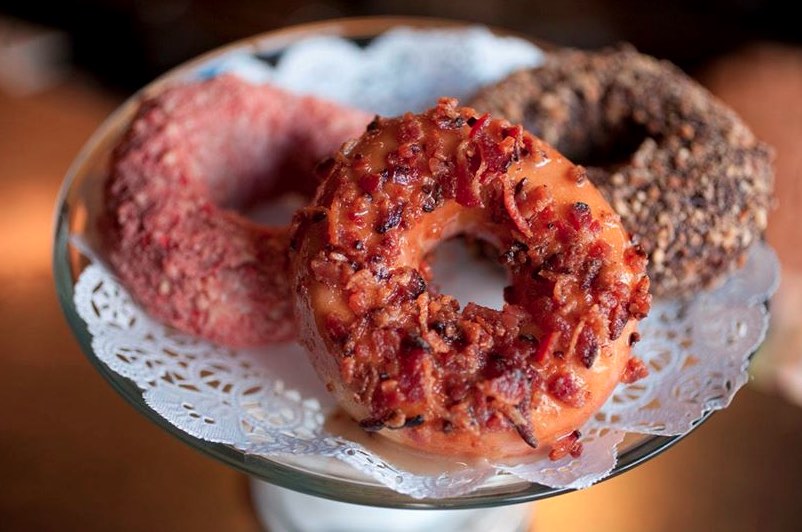 It’s been open since 1924, no I mean literally, it’s been open for 80 years as in they’ve never closed their doors. Part of the draw is the comfort food but it’s also the history and like your parent’s house it’s a place you can depend on and know you’ll eat well at.

Both serve French Dip sandwiches and they’re both worth trying as they each serve it with their own twist. Honestly, it’s hard to decide which is better so we’ll leave that coin flip up to you.

Carmen Rocha is credited with bringing nachos to L.A. in 1959, and they’re still considered some of the best in city, along with their filet mignon tacos. The original restaurant in L.A. has been around since 1923 so they’re one of the OG Mexican eateries in the City of Angels. 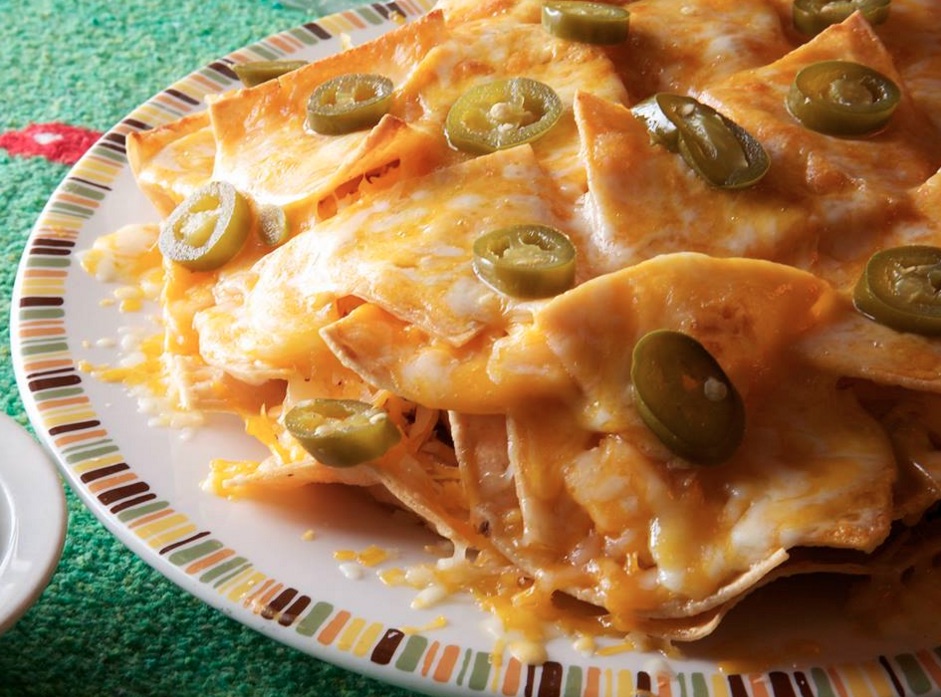 Mario Batali is seemingly synonymous with good Italian food so lucky us that we have two restaurants with his seal of approval (he did co-found them after all). Co-Owner Nancy Silverton is just what he “kneaded” as a baking expert making the perfect crusts topped with the creamiest, most decadent mozzarella. The high-end Osteria Mozza features a mozzarella bar and an extensive pasta menu but for those who want a pizza pie there’s Pizzeria Mozza which features a smaller menu. Either way, get dessert and by dessert I mean the budino.

7. Roscoe’s House of Chicken and Waffles

They popularized a food pairing most people would probably never consider and made it an essential foodie experience. The soul food menu also includes mac ‘n’ cheese and smothered chicken but if you’re going for the first time order Herb’s Special to get a taste of why they’re so acclaimed.

It’s exactly the type of trendy restaurant that you can only find in L.A. Chef Ori Menashe flexes his creative muscles with dishes like Roasted Bone Marrow and Grilled Whole Orata and pan-roasted chicken gizzards. This may sound like a collection of ingredients most people may avoid but the test of a true chef is taking such ingredients and turning it into a  delicious medley in your mouth. Being an Italian restaurant it’s no surprise their homemade pastas are amazing especially the Cavatelli alla Norcina (ricotta dumplings with pork sausage). The other half of this cooking duo is his wife Genevieve Gergis, a pastry chef who delivers with the bittersweet chocolate budino tart and the creme fraiche panna cotta.

A Hollywood institution since 1919- making it the oldest restaurant in Hollywood- and one of Charlie Chaplin’s favorite eateries (they dedicated a booth to the icon), what more is there to say? The rich history of the restaurant includes a bevy of writers and Old Hollywood actors who frequented the place and it’s the home of one of the best martinis in the city. But let’s talk about the grill- it’s an open-fire grill in the center of the restaurant and is about as old as the place itself plus the menu has remained essentially the same since it opened. With its high ceilings and dark wood paneling the ambiance is unsurprisingly warm and reminiscent of the golden years  of Hollywood so come for the steaks and martini and stay for the rich  history. Fun fact: It was featured in “Mad Men” and is also home to the first public phone booth in Hollywood,  talk about ancient history.

It’s Texas by way of L.A. at this barbecue joint and the Number One seller is their juicy brisket. It’s considered some of the best BBQ in the city and offers a very tempting and abundant Texas Sampler cause, as they say, everything is bigger in Texas (even if you are in L.A.)

Like the Cole’s v. Philippe’s debate, we can’t choose our favorite among these iconic delis. Canter’s is one of L.A.’s oldest delis- it was a favorite hangout spot for Guns N’ Roses-  and it’s open 24 hours so you can tuck into matzo ball soup or their baked goods temptingly on display any hour of the day. Langer’s #19 with hot pastrami , coleslaw and their famous double-baked bread is all the rage and it’s considered one of the best pastrami sandwiches in the country so there will be a line but it will be worth it.  Nate ‘n Al has been a fixture in Beverly Hills for 70 years where some of Hollywood’s finest have dined and yet it retains a homey vibe with the home-style cooking to match.

It’s really not hard to find a good taco in L.A. but if you want to taste something a little different but still authentic and only available in L.A. than this is the spot. A guisado is a stew so basically it’s not something you think of putting on a tortilla but that’s exactly what Armando de la Torre did and it turns out it’s delicious. First-timers should order the taco sampler (six mini tacos) with the tinga de pollo and the calabacitas.

Chances are anyone visiting L.A. has probably heard of Pink’s and for good reason. Purists will say the best place to get Pink’s is at the original shack on La Brea. They have all kinds of dogs (I’m partial to the Lord of the Rings) some named after celeb fans like the Ozzy Spicy Dog and others an ode to places like the Mulholland Dr. dog but what makes them really stand out is the snap of the dog and the fact that they’re made to order.

Chef and founder Roy Choi is a culinary star in L.A.  and credited with popularizing the food truck movement. The Kogi food truck introduced Angelenos to Korean- Mexican fusion with dishes like kimchi quesadillas and short rib burritos which caused many foodie tongues to start wagging for the marriage of flavors of two of L.A.’s most popular foods.  Chego was his first foray into a brick and mortar eatery and unlike Kogi, it’s all about a more familiar combo- rice and meat- while still fusing Korean and Mexican flavors. Locals rave about the ooey gooey fries (as they should) but first-timers should definitely try The Beefy T bowl.

When someone comes to visit you in L.A. for the first time, where do you insist they have to eat? Let us know in the comments below!