ET-94 was the the last flight-qualified external fuel tank ever built by NASA.

It was designed to carry enough fuel to generate over a half-million pounds of thrust when flowing through the Space Shuttle’s Main Engines (SSME’s), ensuring the necessary propulsion for a shuttle to get into orbit.

Although the tank never did make it into space, it does have one important final mission to undertake.

Last year NASA donated ET-94 to the California Science Center to help finalize the museum’s space exhibition, making it the only place in the world that people will be able to go to see a complete shuttle stack with all real flight hardware in launch configuration.

In the coming months ET-94 will be transported to California to fulfill that donation. 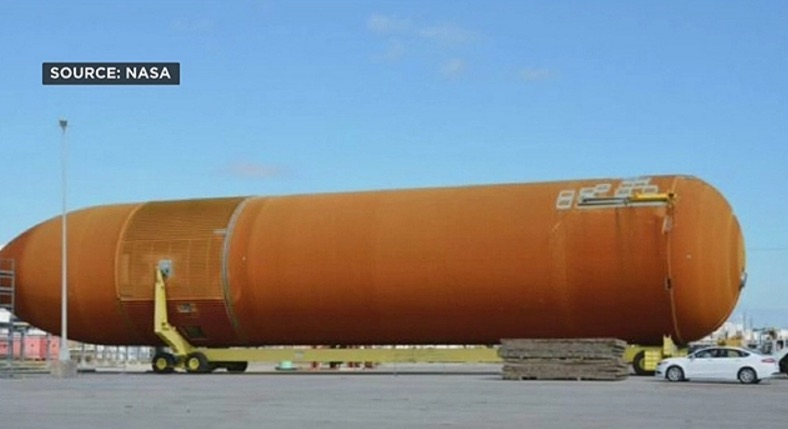 The journey will begin on April 12 originating at Michoud Assembly Facility in New Orleans and traveling by barge through the Panama Canal before arriving in Fisherman’s Village in Marina del Rey on May 18.

From there the tank will loaded on to a truck and hauled on 16-mile trek, ultimately arriving at The California Science Center on May 21.

The tank will then finally be piggybacked on to the back of the Space Shuttle Endeavor, where it will stay on view for the public.

Standing upright at around 15-stories tall, the tank is massive in its own right, yet it is neither as wide nor as high as Endeavor, which was famously transported across Los Angeles back in 2012.

Because of smaller footprint during transport, the impact of the transit process should be less than that of Endeavor.

For more information on the arrival of ET-94 and to see a map of the route, visit californiasciencecenter.org.