Artist Darren Pearson (aka Darius Twin) has a very distinctive way of looking at Los Angeles. Through the use of LEDs and slow-shutter photography, he composes ‘light sculptures’ that take advantage of the variety of unique settings within our city to create scenes that are totally out of the ordinary.

A few weeks ago Pearson and his girlfriend gathered their equipment and embarked on an evening hike to one of these distinct settings: The former Nazi compound turned hippie commune turned derelict pile of rust that we know as Murphy Ranch.

The origin of Murphy Ranch dates back to the 1930’s, when Winona and Norman Stephens were persuaded by a German National named Herr Schmidt (who they came to believe had supernatural powers!) to build a self-sustaining compound based on the ideals of National Socialism.

They ended up using the pseudonym “Jessie M. Murphy” to purchase land in the Rustic Canyon portion of the Pacific Palisades (hence the name, Murphy Ranch), and plans were soon enacted to begin construction.

Although multiple structures were ultimately completed, just one day after Pearl Harbor law enforcement officials raided the compound and the whole operation was shutdown. The facilities would later be reborn as an artist community in the 60’s and 70’s, but a fire in 1978 destroyed much of it and by 1990 the place was completely abandoned and covered in Graffiti.

For additional background I’d urge you to read more about the history via an article on Curbed LA written in 2013.

Also, Tom Carroll did a nice piece on the history of Murphy Ranch via his YouTube channel, Tom Explores Los Angeles. Check the embed below.

Now, as for Pearson’s part, the compound was a perfect backdrop to make something totally cool. So he gathered his gear and went on a 3-mile hike up into the canyon during the evening.

The image he chose to create (that is, after he scared a bunch of wandering high school kids) was a collection of light-born skeletons scattered amidst the interior of one of the graffiti-worn structures. 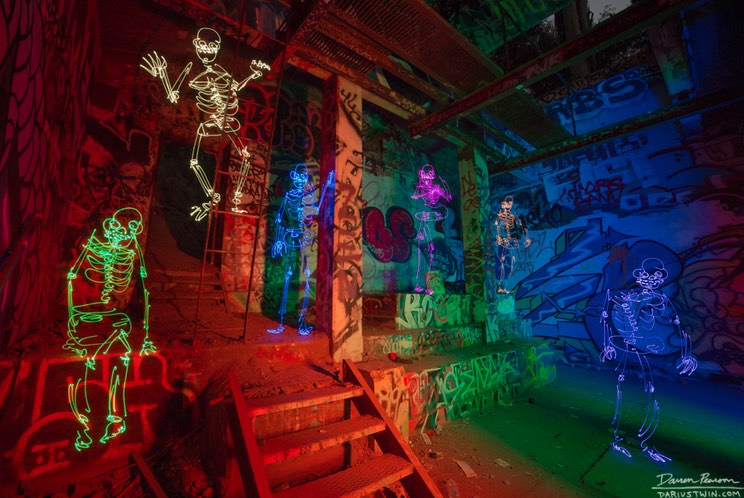 I really enjoyed this piece because I feel like it makes perfect use of the setting and the history, and combines it with a subject matter that is simultaneously spooky and playful. For me, there is just something so L.A. about the fact that a scene like this is even possible. And after I researched the location and found out about the whole ‘supernatural powers’ angle, it made even more sense.

Los Angeles is nothing if not absurdity personified.

For more of Pearson’s work (I think the guy does some amazing stuff) I strongly recommend checking out his website and/or cruising the images on his Instagram.

And although I’m sure many of you are already thinking, “hey, I want to go check that place out for myself” you should be aware that may not be the best idea.

Pearson told me over email that he’s been up to the compound a few times, but from the research I’ve done it seems like trespassing tickets may be in your future should you choose to hike the canyon to the compound.

Greg Keraghosian of Yahoo reported in a story from earlier this year that he inquired to city officials days after a journey to Murphy Ranch and was told by LA Parks & Recreation Superintendent Charles Singer that, “The fenced-off area is off-limits. The department is planning to clean that up, and we’re trying to secure funding to do that. Some of the area is open for hiking and viewing. All the graffiti is illegal.”

So there you have it. Cool art. Unique setting. Crazy history. Hike at your own risk.