So There’s a Big ‘No-Pants Metro Ride’ Happening in L.A. This Weekend

Cause there’s a day for that!

This Sunday, January 10, 2016 is the 15th annual incarnation of a world-wide no-pants subway day originally conceived by the creators of Improv Everywhere in New York City.

For the 8th year running the folks at GuerilLA will be helping organize the Los Angeles version of the event, and here’s how it works:

Participants (or agents as the organizers call them) gather at one of five rendezvous points and board their respective trains for phase 1 of the mission (all boarding times are between 1:00pm – 1:30pm).

The five rendezvous points are:

Each of the rendezvous groups will have a ride captain who will help guide their teams to converge at Union Station, hang out for around a half hour and then board a 2:34pm train headed for Hollywood & Highland. 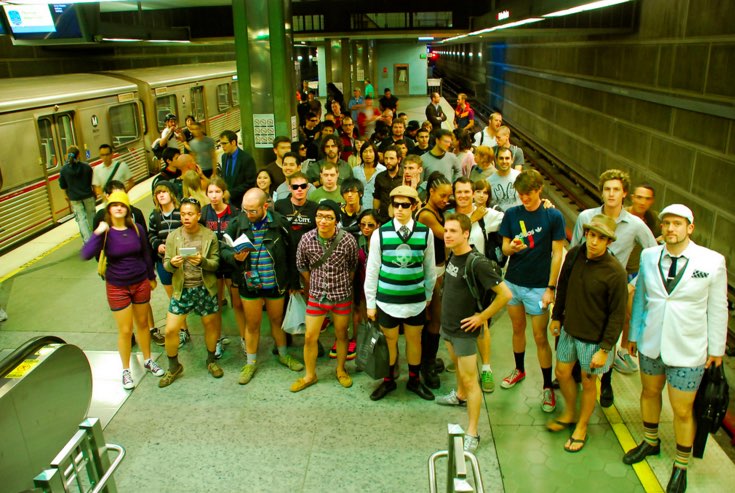 After everyone arrives at Hollywood & Highland (roughly 2:55pm) the organizers with wrangle folks together, say a few inspiring words, and then break off to one of two (aptly named) debriefing locations… aka places to hangout, for scheduled 3:15pm meet-ups.

The debrief spots will be at Loaded Hollywood (21+ only) and the Pig N’ Whistle (more family friendly).

Oh yeah, and did I mention you’re not supposed to wear any pants!

Depending on how the weather stacks up that day, you may want to consider an umbrella as well.

For more information, additional guidelines and specific instructions on the routes and timing for the day, visit the full event rundown at gueril-la.com.

And if you want to join the event and share with friends, there’s an official Facebook event page to make it a bit easier on that count.