Ready for the petals?

You may recall that back in February the anonymous art collective also responsible for the Griffith Park Teahouse decided to brighten up downtown with a pop-up art installation that rained down flower petals over an alleyway between the Arcade Theatre and the Cameo Theatre on Broadway.

Well, the group is back at it again, and this time they’re going a more… industrial route.

According to a press release put out by the collective, Petal Drop LA (02) will invite the public to an industrial site adjacent to DTLA where thousands of fallen jacaranda blossoms will be and I quote, “collected, sorted, and processed” to create a “surreal factory” that will only last through the morning.

So what does that mean?

Well here’s a snapshot of what you might expect… 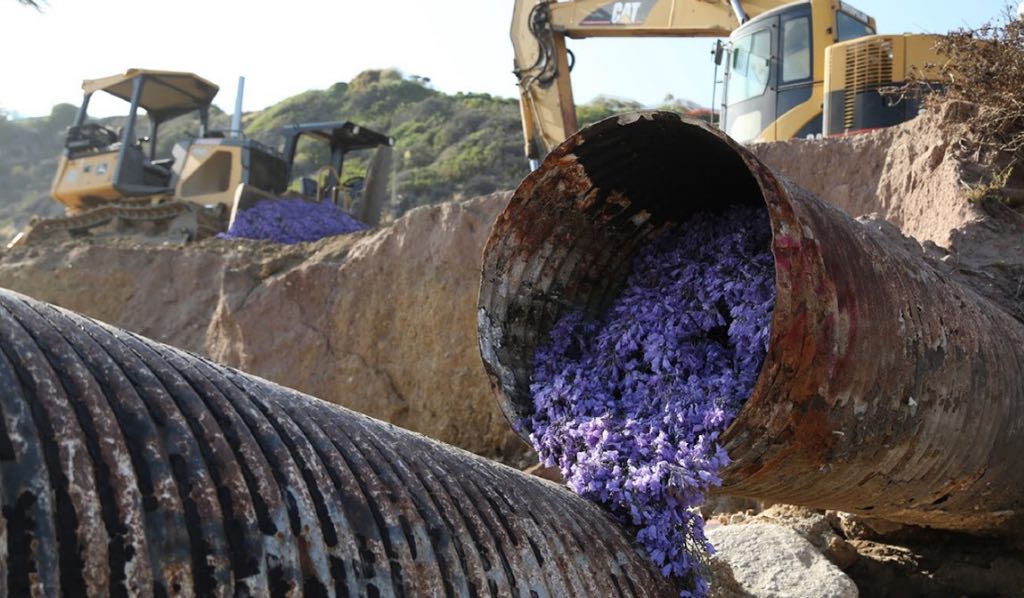 For those interested in going, my one piece of advice would be to get there as early as possible.

As you can see, the line was  pretty intense (the wait was about two hours) and we ultimately decided to abort the mission.

That said, this time around the public won’t know the exact coordinates of the May drop until the day of the event.

Perhaps in order to stem of the tide of potential visitors (or perhaps just to build buzz?), the location of this month’s drop will be revealed on Sunday, May 29 at sunrise via Twitter (@petaldropLA), Instagram (@petaldropLA), and by a recorded message at 323-905-4574.

The drop is scheduled to run until around noon, or until when the flowers run out (whichever comes first).

As a reminder, this event is free and open to the public, and there are two sites for the drop, which you be able to walk between (just wear appropriate footwear).

Street parking will available in the area.