Not usually an early-riser? You may want to make an exception tomorrow, if only for the one morning.

Mars, Venus, and Jupiter are currently in the midst of a planetary trio (visible during the predawn sky), which is defined as a grouping of planets all visible within a 5-degree viewing diameter.

And while the trio has technically been visible since October 24, and will remain in effect until around October 29, the closest alignment of the three will take place in the early morning of Monday, October 26.

Of course the good news is that you don’t have to have any special vantage point or equipment to observe the trio.

Just be up at the right time, look east (the direction the sun is coming up), and hope for non-cloudy weather. 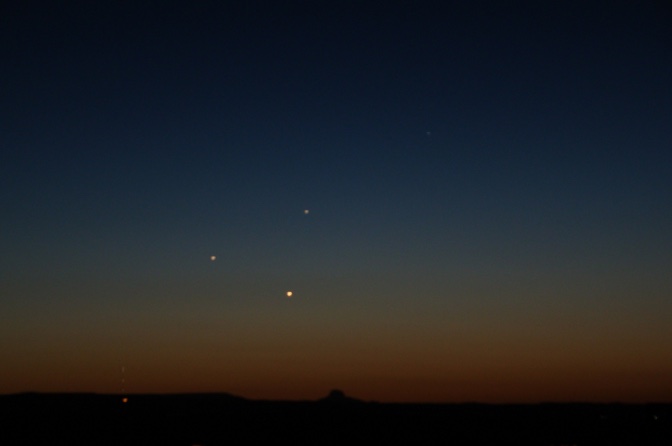 Right now the local forecast calls for mostly clear skies, which should lend itself to decent viewing of the event.

Sunrise is set to take place at 7:07am, which means around 6:00am or should be a good viewing time.

Remember, you don’t need any special equipment to view the planetary trio in the sky, but a telescope or pair of binoculars would be super helpful if you’re interested in checking out any of the moons of Jupiter, or you want to get a better look at Mars, which will be much more dimly lit than either Venus or Jupiter.

Keep in mind that a trio of planets coming together like this is a particularly rare occurrence.

The last planetary trio was in 2013 and next one won’t occur until January, 2021, so if you don’t catch this one, you’ll have to wait a good while.