This week includes an all-you-can-carry pumpkin patch, $1 pizza, a ninja-themed halloween maze, a grip of horror movies at The Wiltern, and a whole lot more. 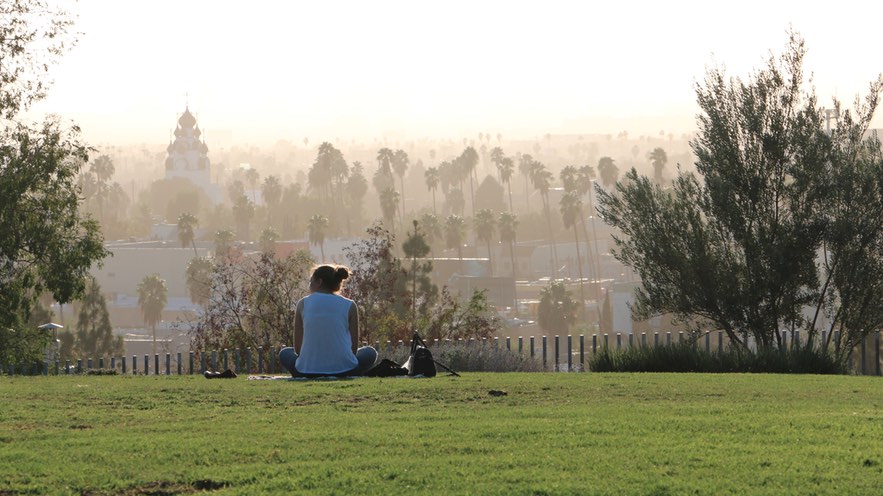 From Monday, October 26 until Friday, October 30 Valerie Confections will be handing out complimentary samples like their Almond Fleur de Sel Toffee, Scotch and Stout Truffles and Chocolate-Dipped Caramel Apples. For more information and a schedule of the delicious samples, see our full story here.

Prime Pizza located on the food-centric block of Fairfax is turning one year-old this Monday, October 26, 2015. To celebrate, the critically acclaimed pizza joint will offer $1 cheese slices from 11:00am to 5:00pm.

4. Celebrate The Day Of The Dead At The Iconic Olivera Plaza

There are a bunch of free ‘Day of the Dead’ activities at Olivera Plaza till November 3, 2015.

5. Get Festive With Halloween Inspired Drinks At Bar10

This week, West Hollywood’s Bar10 will offer two Halloween-inspired cocktails sure to get Angelenos in the mood to celebrate All Hallows’ Eve! The Cauldron is a spiced rum creation with cherry liqueur, blackberry cordial and a dash of fresh lime juice. If you like pumpkin pie the Irish Autumn is made with Tullamore Dew Whiskey, Baileys, a pumpkin spice liquor, pumpkin purée, graham cracker and a pumpkin pie spice crust, it’s like a pie you can drink! These cocktails will be available on Monday until Halloween.

The popular screening series that has already held court in London and New York is now here in Los Angeles! For each screening of the Rooftop Film Club series organizers will set up rows of lawn chairs on the r oof of the Ricardo Montalbán Theatre and provide headphones for each attendee. Doors open at 6:00pm with screenings starting at 8:00pm. Kicking off the week of screenings is The Thing on Tuesday, Nightmare on Elm Street on Wednesday, Psycho on Thursday and Friday 13th on Friday.

An immersive,  one-of-a-kind musical production of the classic Stephen King tale of bullying, cruelty, and revenge. Now playing at the historic Los Angeles Theater. Performances all week and weekend long. Discount tickets and more information available via our friends at Goldstar.

12. The Ancient Forest At Descanso Gardens

Happening at the Mayan Theater this event will have wrestling matches, aerial performers, contortionists, and plenty of other wacky antics. Tickets range from $40 to $75 and if you can’t make Wednesday’s show there’s one more on Thursday.

If the idea of hopping on a bandwagon that travels through the darkness of Griffith Park while costumed characters seep out of the shadows to try to terrify you sounds like the time of your life… then step right up to the L.A. Haunted Hayride!

The Bootleg Theatre in Echo Park is offering one hour long FREE yoga classes with Kali Yoga every Wednesday and Sunday at 11:00AM all October long. Updates,schedules and an indie rock instrumental playlist for the classes can be found on their Facebook event page.

18. The Nightmare Before Christmas in 3-D With 4-D Sensory Effects

El Capitan Theatre’s dazzling 4-D screening of The Nightmare Before Christmas, will bring Halloween Town and Christmas Town to life. Watch the movie in Disney Digital 3-D while the 4-D sensory effects, that include fog, wind, snow and more, enhances your movie experience. Find a full schedule of screenings for this week and discount tickets at Goldstar.

The folks from Grand Performances continue their FREE fall movie series with a screening of Who Framed Roger Rabbit at California Plaza in DTLA.

Attention pumpkin carving enthusiasts! The Rise of the Jack-O’-Lantern Festival features more than 5,000 hand-carved illuminated jack o’lanterns created by professional artists and sculptors arranged in creative ways along a 1/3-mile scenic walking trail all set to an original music score. In 2015 there are two L.A. locations where you can enjoy The Rise, at either Descanso Gardens or Santa Anita Park. Be sure to look for some discount ticket options via our friends at Goldstar for this event (while supplies last).

25. SkyBar At The Mondrian Is Throwing A Batman-themed Costume Bash

SkyBar at the Mondrian presents Return to Gotham, a Batman-themed costume bash that takes place Friday and Saturday.

26. Revenge of the Ninja

Revenge of the Ninja is a ninja-themed haunted maze featuring a 3500 square foot indoor/outdoor solid-walled labyrinth that includes “heart-stopping displays, mind-boggling special effects, and nightmarish scare talent.”  Well, at least that’s what the organizers say! The maze is put together and sponsored by the Way of the Shadow Martial Arts Academy in Torrance.

Plan Check Kitchen + Bar and Sanrio are teaming up to introduce the newest Sanrio member Gudetama, the lazy egg, through a special multi-course menu. Starting October 30th and running through November 29th, a specially developed Gudetama-inspired menu created by Executive Chef Ernesto Uchimura will be available for $39 and each menu set will come with a limited edition Gudetama t-shirt. Gudetama is also set to make special restaurant appearances throughout the month at all Plan Check locations.

28. The Wiltern’s Night of Horror

The Wiltern theater will be transformed into a haunted house to host a pre-halloween mega bash featuring a back-to-back-to-back-back horror movie screening (including An American Werewolf in London and Cabin in the Woods), a dance party hosted by Henry Pope, costume contest, virtual reality horror film showcase and live hollywood FX makeup presentation by Cinema Makeup School. Be sure to check for discount tickets for the event via our friends at Goldstar (while supplies last).

30. Sound Bath At One Down Dog In Eagle Rock With Jamie Ford

No need to drive way into the dessert for a sound bath. Jamie Ford is stopping by One Down Dog this Friday! Relax in savasana as the healing tones of planetary gongs and crystal singing bowls bathe you in vibration. Reach a deep state of relaxation and meditation. Leave feeling “re-tuned”, restored and rebalanced. The sound bath will take place from 7:30pm to 9:00pm and cost $20 in advance and $25 at the door. Register on the One Down Dog events workshops page.

31. Tales From The Crypt Halloween Special

The Captured Aural Phantasy Theater  is bringing back to life the “Tales from the Crypt” comic book. Relive old stories that inspired generations of horror-tellers performed live right in front of you! Happening at The Bob Baker Marionette Theater Thursday and Friday.

Open to the public once a month the California Market Center hosts a showroom sample sale event where 13 floors of participating showrooms open their doors from 9:00am-3:00pm to savvy patrons.

Enjoy traditional Bavarian fun, food, and beer with a Halloween twist this weekend at the oldest running Oktoberfest celebration in Southern California the Alpine Village in Torrance. The festivities will continue on Saturday too.

The Santa Monica Pier presents Front Porch Cinema, a free movie night under the stars taking place every Friday during the month of October. Unwind on old-timey lawn chairs and watch oceanfront films on a giant inflatable screen, this week the featured presentation is Ghostbusters. The Cinema Lounge will open at 6:00pm and the movie begins at 7:30pm.

On Friday, October 30, 2015 from 2:00pm – 6:00pm, The Coffee Bean & Tea Leaf® is celebrating Halloween with a BOGO Pumpkin treat. Coffee and tea lovers are treated to a complimentary pumpkin beverage with a purchase of any seasonal pumpkin drink (of equal or greater value; at participating stores only).

Celebrate Halloween with your dog. Walk to Echo Park Lake with a pack of costumed dogs and get awesome prizes, goody bags and bash pinatas in to get more treats for your pooch! The walk takes place from 7:00pm – 9:00pm.