So is the Proposed Inglewood NFL Stadium Taxpayer Free? The Answer is No, But…

Last week Chris Meany, Hollywood Park’s senior vice president put this quote out there, referring to a proposed new stadium and development project in Inglewood that could be the precursor to the St. Louis Rams moving back to Los Angeles:

“There will be no public dollars, no taxpayer dollars used for this project,” he said. “The entire project has been privately capitalized and is being privately funded.”

Ummm… Chris… you might want to walk that one back. Well, you and everyone else who’s been touting this notion.

According to a new associated press report that examined a 187-page outline released by developers, there is at least $100 million in costs that will be paid back to the group funding the project. That’s exactly $100 million more than you might have been lead to believe.

Still it doesn’t mean this is necessarily a terrible deal for Inglewood, just that advocates were being, at the very least, somewhat disingenuous in their interpretation of “no taxpayer dollars.”  The headline here on most news outlets is going to be outrage at the $100 million figure, but this deserves some context and measured thought.

That said, let’s back up for a moment. 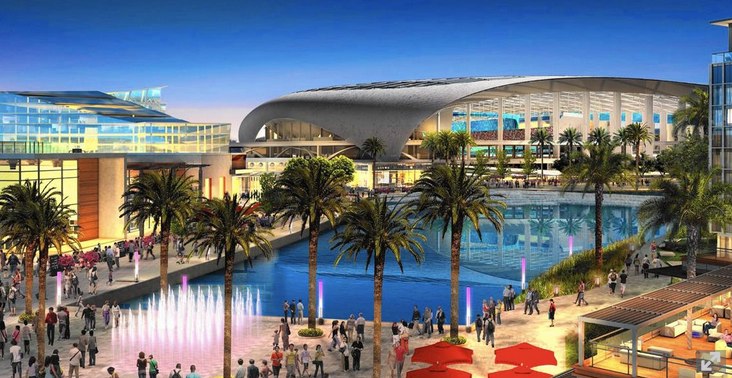 First, let me break down the highlights from the examination of the outline, good and bad, then I’ll talk a little bit about what I think this means in the context of what you may have been hearing about this whole deal being “taxpayer free” and the implications moving forward.

So here’s what the AP found, per a report published by NBC Los Angeles:

So there you have it, somewhere in the neighborhood of $100 million dollars of tax money going back to the developers, BUT, only after a guaranteed portion of it is soaked up by the city.

Now, some thoughts on all this…

First, the notion that this, or any proposed NFL stadium deal will be taxpayer free is, in my opinion, at best pie-in-the-sky, and at worst patently absurd. In reality, there are always going to be public costs associated with financing a sports franchise. Period. But when you start making magical claims in the interest of drumming up support, it can only create mistrust in the eyes of the public.

Raphael Bostic, a professor of governance and public policy at USC, told the L.A. Times that misleading the public could have consequences on ballot measures down the road:

“The process by which these things happen goes a long way toward determining their outcome,” Bostic said. “This is one of those where it could really lead people to become skeptics.”

And when we hear the phrases “taxpayer free” and “NFL stadium” in the same sentence, we ought to be skeptical.

In the same AP report referenced above West Virginia University economist Brad Humphrey noted that  infrastructure costs in stadium deals are almost universally paid for by local tax dollars, even in developments described as privately financed, as with the Washington Redskins new stadium. And of course the forecasts of what the public pays is usually lower than the real life costs end up being.

A particular concern here may be the ongoing costs of the event day expenses, which it’s seems implied the city would continue to foot the bill for after the initial $40 million is paid back. And as Jill Stewart of the LA Weekly points out, there’s no guarantee that this $8 million figure is a fixed cost, and may very well balloon over time.

But while it may be a public relations miscalculation to characterize this project as totally privately funded, that doesn’t mean it’s still not a good deal.

Inglewood Mayor James Butts seems pretty much all-in on the project, and his reasoning has merit, “You’re having a development that is being paid for, 100-percent capitalized by the developers,” Butts said. “In any given year, say we make $24,000,990 in direct taxes and revenues from the project, we pay nothing back toward our costs that we owe.”

When compared to a project like, say, Farmers Field, where developers were going after $350 million in bonds guaranteed by the city in order to get the project off the ground, the Inglewood deal seems even that much more attractive.

Victor Matheson, a specialist in sports economics who teaches at the College of the Holy Cross in Massachusetts told the AP that while the proposed Inglewood deal pretty much amounts to big tax breaks, it’s doesn’t look half bad when compared to the history of these types of stadium deals:

“The project isn’t quite subsidy-free, but it is also a far cry from the direct building subsidies that averaged about two-thirds of total stadium costs in the building boom,” he said, referring to the new stadium craze of the 1990’s and early 2000’s

For now, I’ll take the wait and see approach to figure just how favorable, or not, the details of this deal will be as more information becomes available. I’m confident there will be ample time for both advocates and opposition to debate the potential positive or negative effects of this project, and the Rams moving back to Los Angeles. And it absolutely deserves measured thought and consideration.

Just keep in mind, when we’re talking about a new NFL stadium in your town, there’s pretty much no such thing as free.