Raiders, Rams and Chargers All File Paperwork for Relocation to Los Angeles

As an avid observer of the NFL’s possible return to Los Angeles over the years, I can’t even count on two hands the number of times the media has played up the return of pro football to the city of angels.

L.A. is often seen as the best leverage for any current NFL franchise to bargain against when trying to get their home cities to pony up big dollars for brand new stadiums. As such, while speculation about possible moves can become fever pitched, real movement is never actually achieved.

As tantalizing (or terrifying depending on your opinion of the NFL) as it might have been to debate the possibility of Farmers Field coming to DTLA, or discuss potential stadium builds in Carson, Inglewood, or the City of Industry, it was all moot unless at least one team actually filed to relocate.

Well, how about three?

Here’s an official statement released by the NFL this evening (per CBS Sports):

Three teams — the Oakland Raiders, St. Louis Rams, and San Diego Chargers — each submitted applications to our office today to relocate their franchises to the Los Angeles area beginning with the 2016 season. Each team submitted the appropriate documentation in support of its application as required by the NFL Policy and Procedures for Proposed Franchise Relocations.

The applications will be reviewed this week by league staff and three league committees that will meet in New York on Wednesday and Thursday — the Los Angeles Opportunities, Stadium, and Finance committees. The applications will be presented for consideration at next week’s league meeting in Houston on Tuesday and Wednesday. The relocation of a franchise requires the affirmative vote of three-quarters of the NFL clubs (24 of 32). 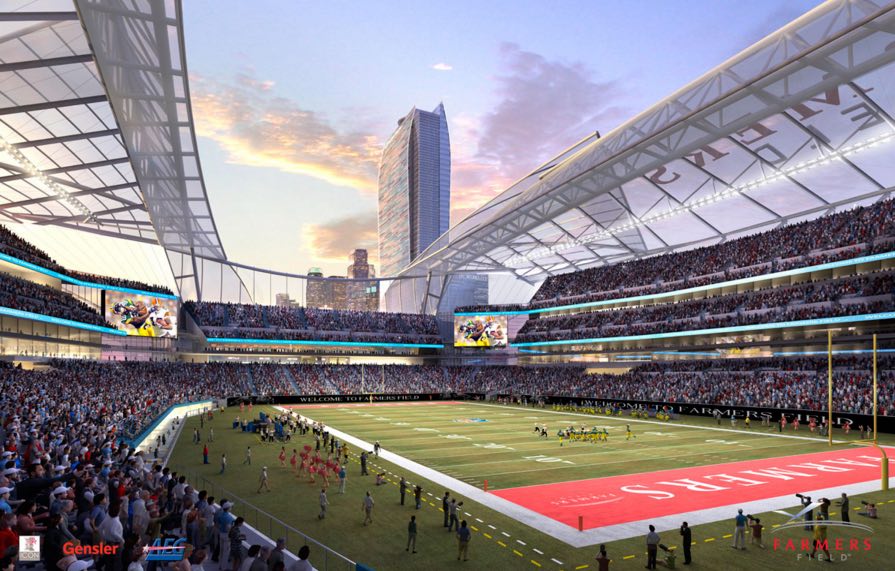 Per ESPN, according to the NFL’s statement on the filings, each proposal has all necessary documentation in support of relocation and each is intended to be effective for the 2016 NFL season.

Arash Markazi summed up the significance:

We've seen billionaires and politicians talking for 21 years but this is the first time 1, let alone 3, NFL teams have filed to relocate.

Of course we still don’t know which of the teams will actually be showing up in Los Angeles to play in 2016.

Also, it’s not clear which franchise ends up in what stadium (will they be sharing a stadium… probably), and what field they’d plan on in the interim (hello Rose Bowl) while the new stadium projects get underway.

Oh, and then there’s the debate that’s sure to spark outrage about public financing of stadiums, which is precisely why the three franchises are choosing to move in the first place.

It’s a complicated and fluid situation, and one that will ultimately be decided by the NFL owners who have to vote to approve the relocation applications.

But it seems hard to overstate the significance of the documentation filed tonight.

One point is for sure.

If any or all franchises do make it to L.A. in time for the 2016 season, we’ll certainly have a lot more Sunday to-dos on our weekly email newsletters.

The NFL owners will meet January 12-13 to push forward next steps.