The VOID’s ‘Star Wars: Secrets of the Empire’

A lot of the virtual reality we’ve seen lately is fun, to be sure. As the owner of a Daydream VR headset, I’ve spent a fair amount of time with a bunch of plastic strapped to my face playing fetch with virtual animals and solving virtual puzzles. I’m also a fan of team-based experiences, akin to those found at ‘arcades’ like Virtual Room in Hollywood, where players use hand-held controllers to shoot a bow or assemble tools. What The VOID offers is something more immersive. A harbinger, perhaps, of our (hopefully less dystopian) Ready Player One future.

In Secrets of the Empire, you’re a Rebel tasked with stealing something very important from the Empire, as Rebels are wont to do. We learned this via a short film in which Rogue One‘s Cassian Andor (Diego Luna) explained that we’d be dressing up as Stormtroopers and infiltrating an Imperial base on the volcanic planet Mustafar.

Those of you who have brushed up on your galactic lore may remember that this fiery planet is where Anakin Skywalker dueled Obi-Wan Kenobi, ultimately losing to the elder Jedi and becoming the disfigured Sith Lord we know as Darth Vader. Vader seemingly holds no grudge against the lava world and instead, often hangs out in a castle there. So, all you’ve got to do is sneak onto this hellscape planet and steal from the one of the galaxy’s most powerful villains. No problem! 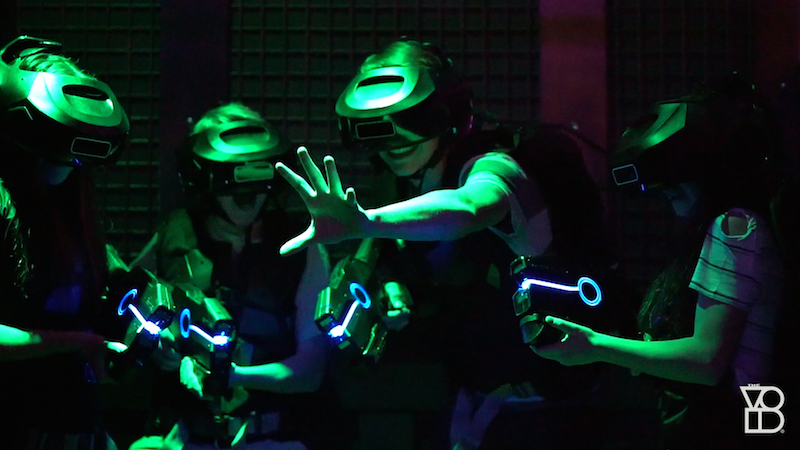 The VOID players Photo Courtesy of The VOID

Our next task was suiting up. It’s a little more complicated than putting a tiny node on your temple à la Black Mirror. The VOID outfits players in a haptic vest not unlike a laser tag vest, and a custom helmet with headphones and a visor. The vest is fairly heavy, but still allows a good deal of mobility. While this might feel a little clunky to players accustomed to lighter HTC Vive or consumer headsets, it at least makes sense for someone who’s supposedly just put on a Stormtrooper uniform.

We were then led into a small room, no larger than the average cubicle, and instructed to lower our visors, thus placing us in VR. I could still see my teammate standing opposite me, only he now wore the classic white armor and helmet of an Imperial foot solider. (If you must, now would be the time to say, “Aren’t you a little short for a Stormtrooper?”) When I looked down at my own body, my legs had disappeared, but my arms and hands appeared in white armor and black gloves.

It only got wilder from there. The room faded away and we found ourselves in the company of cynical droid K-2SO, who was there to guide us through our perilous mission. As our spacecraft approached Mustafar, we could feel the turbulence beneath our feet. When K-2SO instructed us to walk through a door and onto a transport, we actually walked through a door. I reached out and found I could even touch the doorframe. As the transport moved us closer to the base, I could feel the heat rising from the planet’s molten surface. Later, I picked up a blaster and it was, in fact, an actual gun with a trigger. In other scenes, I pushed actual buttons and ducked around corners to escape enemy fire. If I was too slow when dodging, my vest vibrated with impact.

Essentially, I knew we were wearing a bunch of goofy VR gear, winding through small spaces inside a mall storefront in Glendale. But as far I could tell with my visor down, I was a Rebel fighter blasting my way through a labyrinthian enemy base. And that’s pretty damn cool. 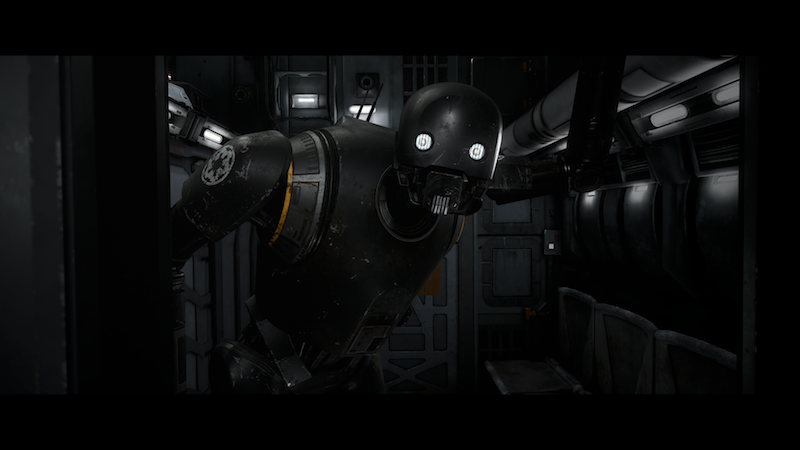 K-2SO is here to help. Photo courtesy of The VOID

This is the kind of VR The VOID specializes in, and why they call it “hyper-reality.” It’s essentially taking a real-world location and covering it with a fantastical skin, which can make you feel like you’re somewhere else entirely. In addition to the Secrets of the Empire, The VOID has also worked within the Ghostbusters and Tomb Raider universes. Recently, Curtis Hickman, COO of The VOID, was a keynote speaker at the Immersive Design Summit in San Francisco alongside LucasFilm’s Diana Williams. Hickman told a story about one guest who was so startled to reach out and feel the “cobwebs” they could see in VR that they ripped off their headset. Such a move is ill-advised, of course. While it may feel a little weird to walk through a VR door, I found I quickly acclimated after I forced myself over the first threshold.