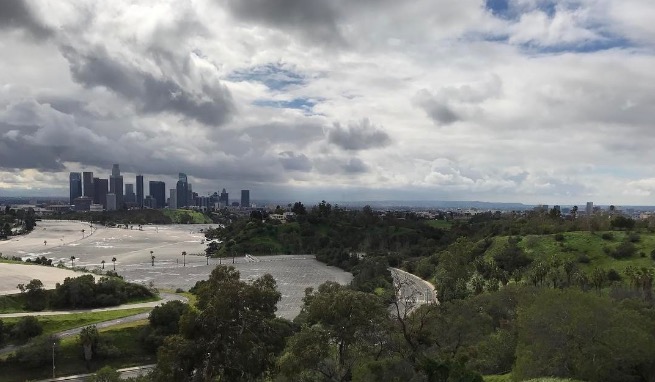 A winter storm is coming for Southern California, and this one’s predicted to be the biggest of the season. Angelenos can expect a fair amount of rain, which could mean flooding or mudflows.

According to the National Weather Service, the rain will begin on Tuesday afternoon and continue through Thursday, with possible scattered showers Friday morning. Projections indicate 2 to 4 inches of rain in coastal regions, while more mountainous areas are expected to receive 4 to 6 inches. Los Angeles County will receive the heaviest rainfall on Wednesday evening through Thursday morning.

AccuWeather Senior Meteorologist Dan Pydynowsi said this storm could be “the single biggest rainfall event” in downtown L.A. so far this year, pointing out that Wednesday’s 2 inches of rain could exceed the 1.75 inches the city received in early January.

While rain is ostensibly good for an area as drought-prone as Southern California, the major concern is mudflows, especially in areas burned by recent wildfires. Santa Barbara County has already issued a pre-evacuation advisory for areas below the Thomas, Sherpa, Whittier, and Alamo fires, according to a release. The County, NWS, and emergency officials will monitor the area throughout the storm, but say residents should be prepared to evacuate. Additionally, any resident who feels unsafe should leave immediately for higher ground or a safe spot even if they do not receive a notice to evacuate.

And if the rain is getting you down, remember that kids 12 and under can get free hot cocoa from In-N-Out on days that it rains.