One of the largest outdoor event series in all of Los Angeles is returning this spring, and it’s promising to be bigger and better than ever.

A dozen different L.A. area venues have been secured for this year’s lineup of films including Exposition Park, Will Rogers State Historic Park, Victory Park in Pasadena, Griffith Park, and Glendale Central Park.

Some of the notable flicks slated to screen include Raiders of the Lost Ark, Stand By Me, Back to the Future, Star Wars, Casablanca, Top Gun, The Goonies, The Sandlot, and Fight Club (and that’s just the tip of the iceberg).

Advanced tickets for Street Food Cinema are on sale now starting at $18 for reserve seating and $13 for general admission.

A full season pass is also available for $175.

Keep in mind discount tickets may be available while supplies last (via Goldstar) for many of the listed venues including,  Exposition Park, Will Rogers Historic State Park, Victory Park, and Glendale Central Park.

Screening times vary by venue, but generally you’re looking at doors opening between 5:30pm to 6:00pm, and films starting by around 8:00pm to 8:30pm.

See the full list of screening dates, venues and films below. 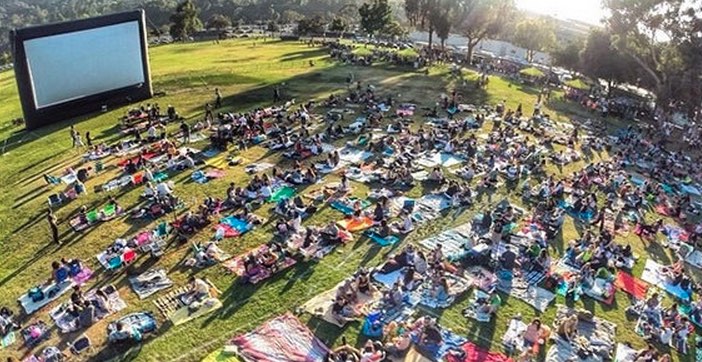 May 7 at Expo Park: Romeo + Juliet

May 14 at Expo Park: Almost Famous

May 14 at Victory Park: Raiders of The Lost Ark

May 21 at Griffith Park: Toy Story

May 21 at Westchester Park: Back to the Future

May 28 at Victory Park: Space Jam

May 28 at Expo Park: Purple Rain

May 28 at Will Rogers State Park: Hook

June 18 at Expo Park: Do The Right Thing

June 18 at Verdugo Park: The Sandlot

June 25 at Will Rogers State Park: Some Like It Hot

July 16 at Poinsettia Rec Park: 10 Things I Hate About You

July 16 at Westchester Park: Knocked Up

July 23 at Victory Park: She’s All That

July 30 at Will Rogers State Park: Breakfast at Tiffany’s

August 20 at Syd Kronenthal Park: Stand By Me

August 27 at Will Rogers State Park: The Princess Bride

September 17 at Expo Park: Do The Right Thing

September 24 at Will Rogers State Park: The Breakfast Club

October 22 at Expo Park: An American Werewolf in London

Although all movie dates have been scheduled out, it looks like the majority of the food trucks and bands are TBA at this time.

For the most up to date information, and to purchase tickets, visit streetfoodcinema.com.