Need an excuse to gorge on some of Los Angeles’ tastiest carbs? It’s National Pasta Month and we have a checklist of our favorites you simply have to try before October is over. Bruce Kalman’s Union is among the best in the city. This month he teams up with the American Red Cross to raise money for hurricane disaster relief efforts. That’s definitely something to raise a glass to.

Other notable happenings around town include: the Downtown LA Oyster Fest, LA’s Best Vegan Taco Competition, Movie Nights at Westbound, Brunch at the Races and much more. 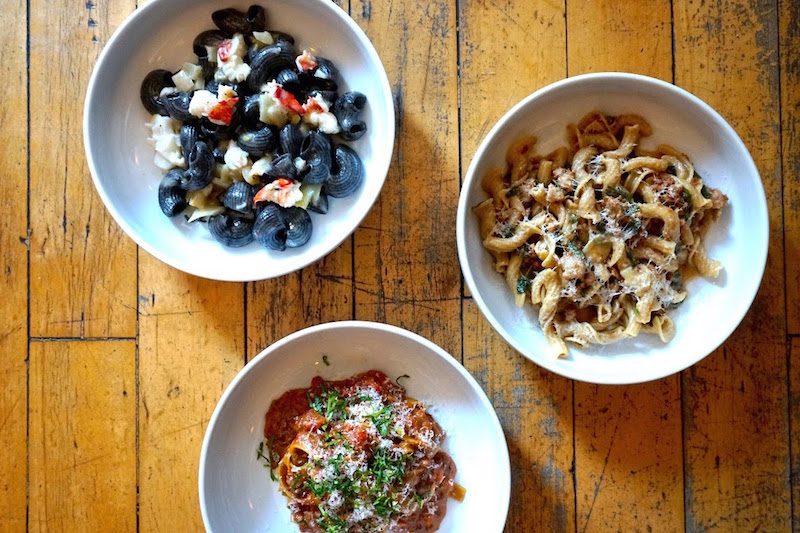 October is National Pasta Month, celebrate and do some good by heading to Union in Pasadena. Chef Bruce Kalman will be raising money for the American Red Cross – Disaster Relief Efforts in Puerto Rico, Texas and Florida through #pastaforthepeople. Each week Union will highlight a signature pasta dish off the menu and proceeds from each dish ordered will go to support the American Red Cross efforts. See the scheduled pasta below. Buon Appetito!

Want more pasta suggestions to eat throughout the month? Below are some of my personal favorites.

This Oxtail Ravioli from @bonekettle is EVERYTHING a foodie could ask for. If you haven't been… go now! Order this and the signature bone broth 🍜 so good!

We're all about sharing & Family Style Dining. . Who are you gonna bring when you visit? Tag Below! ⏬ . #emcseafood

Who's ready for brunch?! This weekend, we're launching a fresh brunch menu at Gratitude Beverly Hills! Brunch bites, pitchers of mimosas, and more. 9am to 3pm, every Saturday and Sunday. Tag your brunch crew below and come join us!

Now you can start your shopping day in Beverly Hills with a healthy brunch thanks to Gratitude Beverly Hills who just launched their new brunch program. Happening every Saturday and Sunday from 9 a.m. to 3 p.m. guests can dine on organic, plant-based fare like Chilaquiles, Cast-Iron Chickpea Quiche, and Buckwheat Flax Pancakes, in addition to a variety of fresh juices and cocktails. View the full menu here.

There’s a new late night happy hour at Westbound from Tuesday through Thursday and on Sundays. Dubbed as “Ghostbound” for the month of October, guests can sip on devilish potions for just $10 during their late night “Witching Hour” from 11 p.m. to close. Cocktails include: Ichabod Plane made with mezcal and cappelletti, Double Bubble Boilermaker Trouble made with pumpkin ale with a shot of applejack and They’re Here made with Appleton rum, falernum, Amaro Montenegro, and clover bitters.

Mr. C Beverly Hills is extending their popular Poolside Cinema series into fall. Every Tuesday evening, from October 10 to November 21, you can visit the gorgeous yacht-inspired pool deck at the Italian-inspired hotel, where you’ll ensconce yourself in a lounge chair for a film and casual-yet-elevated food under the stars. The series kicks off with Jurassic Park.

Westbound will host “Harvest Night” every Wednesday in their Downtown Los Angeles bar. Autum activities include: Pumpkin Painting by the fire pit, Pumpkin Bocce Ball, Bobbing for Apples while sipping on their new cocktail list.

Whisper Restaurant & Lounge at The Grove recently launched “Hollywood Jazz Nights” happening every Wednesday until October 18. The restaurant will screen a classic Hollywood film each week with a troupe of talented jazz musicians accompanying the films score. Screenings begin at 7 p.m. with happy hour before showtime from 4 – 7 p.m. This week’s movie is The Quite Man.

Throughout the month of October, Westbound will host double-feature screenings of cult classic Halloween flicks on their back patio every Sunday night as well as on Friday the 13th and Halloween. Screenings begin at 6 and 8 p.m. This Friday they’ll host a double screening of the 1980’s classic Friday the 13th.

San Antonio Winery in DTLA celebrates 100 Years in Los Angeles this Saturday with a party. Highlights include a grape stomp, live music, a wine and beer garden and a stellar line up of food trucks including The Grilled Cheese Truck, Trejo’s Tacos, Vaka Burger, CoolHaus, Homeboy Industries, Gelateria Uli and more. In addition, there will be an Oktoberfest area with beer and picnic tables. Tickets are $55-80 and include food and drinks: two food tickets and four drink vouchers.

Visit the Los Angeles Central Library in DTLA for the lecture “Pocho Gastronomy is the Future of Mexican Cuisine in America” with acclaimed food journalist  Bill Esparza. He’ll share stories about Mexican cuisine in Los Angeles, with a focus on Boyle Heights, Huntington Park and Pacoima, and the city’s four styles of Mexican cookery: regional fondas, street food, pocho cuisine and Alta California cuisine, discussing their recipes and giving tips on where to shop and eat. The event begins at 10:30 a.m. and is free and open to the public. Registration is available via Eventbrite and highly recommend.

LA’s Best Vegan Taco Competition comes to Cafe Gratitude in Larchmont Village for its second annual festive event. The competition boasts eight chefs, two winners, live music, and a whole lot of tacos, with participating eateries including Gracias Madre, Om Sabor and Sun Cafe. In addition to the competition itself, beer, kombucha, and coldbrew will be offered with entry. General admission tickets are $30, and include tacos and beverages.

Top Hollywood bars will come together for a two legged Hollywood Crawl of Fame. Two teams of crawlers, a Northside Crawl and a Southside Crawl will journey by foot to five bars and then end at a big party. Tickets cost $50 and includes a surprise, signature drink at each of the five stops. Participating bars include: MiniBar, Lost Property, Black Rabbit Rose, Three Clubs, Sassafras, Mama Shelter and more.

Throughout the month of October, Westbound will host double-feature screenings of cult classic Halloween flicks on their back patio every Sunday night as well as on Friday the 13th and Halloween. Screenings begin at 6 p.m. and 8 p.m. This Saturday they’ll host screenings of The Addams Family and Beetlejuice.

LA Weekly’s Brunch at the Races returns for another year of endless signature bites from over 30 of L.A.’s most popular brunch spots. Taking place at Santa Anita Park in Arcadia, expect 30+ restaurants including: Barbara Jean , Du-par’s, Goldies, Little Dom’s, Pez Cantina and more. Other highlights include live music, cocktail samples and access to the first horse racing of the season. Tickets are currently available online and range from $40 (general admission) to $60 (VIP). However, prices will increase, so claim your tickets fast!