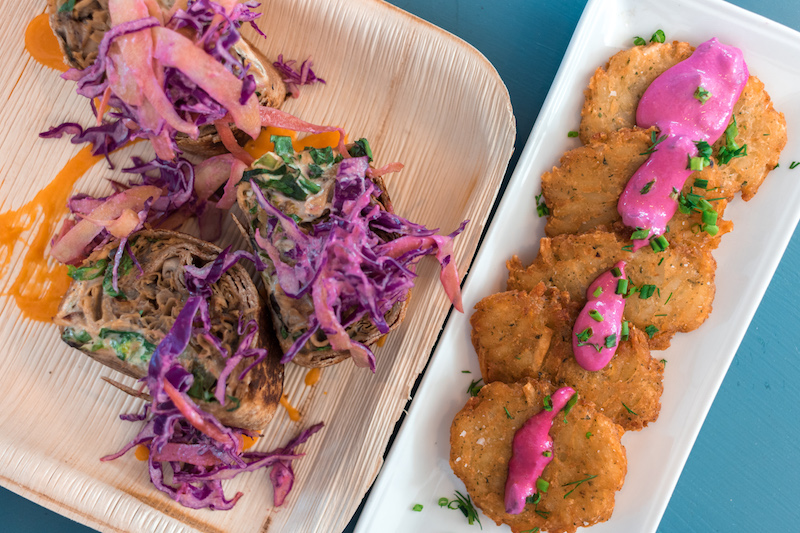 Grab your notepad, because this week’s news bites are full of suggestions on where to eat in Los Angeles.

First up I want to highlight a new plant-based eatery in Virgil Village with a non-steak Philly Cheesesteak. Also of note: I’ll link you on where to get the best fish tacos in the city and a few hidden food spots to get your grub on. As for this weekend, Angelenos can look forward to Smorgasburg’s 2nd Annual Pop-up on the Pier in Santa Monica, a SoCal coffee discussion, the Big ‘Cap Beer & Cider Festival happening in Arcadia, a huge pork festival and much more.

We Like L.A. paid a visit to Jewel a new plant-based eatery serving inventive and tasty food to the health conscious. On the menu you’ll find a Philly Cheesesteak, donuts and crab cakes all made vegan style. Read all about Jewel here.

Foodies looking for good eats sans a brick and mortar should checkout Saveur’s story highlighting four weird places to eat in Los Angeles. From stuffed nann roti inside a West-L.A. Chevron to Mexican-inspired Korean tortas hidden in a swap meet these places are redefining the dining scene one bite at a time.

LA Magazine identifies L Fish Tacos in Boyle Heights and popular food truck Ricky’s Fist Tacos as the best places frying up pescado and goes onto compare the both letting readers know about the batter, creme, salsa bar and more.

The Federal Long Beach has introduced “Flights Around the World” a monthly series where they highlight a different foreign country each month through special prix fixe menus. The first stop will be Ireland in March. The Lunch Prix Fixe is $25 and will include an Irish Soup of the Day, House Cured Corned Beef Brisket & Boysenberry Sandwich, and a Blackberry and Apple Cobbler topped with a Honey Whiskey Ice Cream for dessert. The Dinner Prix Fixe is a $35 three course meal with the Irish Soup of the Day, a choice between Smoked Duck Breast Confit or Herb Roasted Sirloin Steak, and for dessert, the Blackberry and Apple Cobbler with Honey Whiskey Ice Cream. There’s also an optional  “Taste of Ireland Charcuterie Platter” for an additional $17. Lastly, the restaurant will offer a flight of three varieties of Irish whiskey for $18.

Down some tacos, drink some locally brewed beers and test your trivia skills this Tuesday during Tacos & Trivia night at Angel City Brewery in DTLA.

All-Star Chef Classic at L.A. Live in DTLA, from March 7-10, will feature dinners made by top chefs like Ludo Lefebvre, Michael Voltaggio, Jose Andres, Jose Garces and more. Events include a Vegetable Masters Dinner, an American Masters Dinner, All-Star Women Masters Dinner, Spanish Masters Dinner and strolling events like the Middle East Feast and Grill & Chill. Each event requires its own ticket. Check for discount tickets on select events via Goldstar before making your purchase.

Marijuana Madness is an innovative burlesque and live music show coming to The Three Clubs in Hollywood this Wednesday. Travel back in time to 1937, when National Marijuana Prohibition became American law. Learn the truth behind the mass propaganda that insisted that cannabis led to moral decay and debauchery, resulting in persecution of marijuana users.

Emily Fiffer and Heather Sperling of Botanica will celebrate and support women in their industry and beyond by hosting two pop-up shops on International Women’s Day. There will be a pop-up flower shop from Whit Hazen, ceramics shop from D Ceramics, wine tasting of women made wines, free classes from Love Yoga and dish specials from women chefs and cookbook authors Gabrielle Hamilton, Ana Sortun, Alice Waters and Claudia Roden. See the full line up here.

The Belvedere at The Peninsula Beverly Hills has partnered with Casamigos for a new, weekly “Terrace Hours” happy hour launching this Thursday and available through summer. Every Thursday from 5-8 p.m., the outdoor Terrace will feature live music and a happy hour food menu with highlights that include Shawarma Tacos with hanger steak ($9), Charred Grilled Octopus ($9), Oysters on the Half Shell ($12 for 3), and a Roasted Cauliflower Flatbread ($12). Four specialty tequila-based Casamigos cocktails will be available for $10 each including a Mexican Negroni, Anejo Old Fashioned, Spicy Blood Orange Margarita and a Cucumber Basil Margarita.

CREAM will launch a Care Bears edition of their ice cream sandwich this Wednesday at CREAM North Hollywood. Get a taste of two Good Luck Bear Ice Cream Sandwiches, created exclusively for the Care Bears as part of the 2018 Colors of Caring campaign. The sandwiches will be available only until the end of March. Expect games, giveaways and a special celebrity appearance during the public party from 4-8 p.m.

March 8 is National Women’s Day, celebrate through food with a Taste of Feastly, Women’s Edition. Enjoy an evening of food and drink highlighting female chefs!

Del Frisco’s Grille in Santa Monica will celebrate International Women’s Day by bringing together Westside women in the community making a difference. The networking-style mixer will include an evening of pampering, appetizers by Chef Daniel Tiger, wine tastings from Prisoner Wine Company, manicures, massages and a raffle with gifts from local businesses including Philosophy and Pause Float Studio. A portion of the proceeds will benefit Westside Family Health Center’s Reproductive Health Services Program.

Stop by Santa Anita Park in Arcadia for the Big ‘Cap Beer & Cider Festival. The festival will include local and national craft beers, ciders and food trucks right alongside the racetrack.

Join a lively panel of SoCal coffee experts as they discuss significant developments in the region’s coffee landscape, beginning with early settlers who roasted beans over a nightly campfire to the rise of local commercial and specialty roasters and coffee houses in the 20th century. The panelists will conclude by exploring coffee’s Third Wave and the espresso bars and cafés that have taken over Southern California today. A reception with refreshments will follow the talk at 11:30 a.m. The discussion is free to the attend.

Smorgasburg’s 2nd Annual Popup on the Pier in Santa Monica returns for a one-day affair that will satisfy your tastebuds through 70+ vendors including goa-taco, Amazebowls, Shrimp Daddy, Lobsterdamus, Big Mozz and more.

The 2018 LA COCHON555 heads to Santa Monica this Sunday for a three-hour culinary experience of all things pork. Taking place at The Viceroy, this delicious nationwide culinary tour will feature 100+ prominent chefs, farmers, sommeliers, distillers, brewers and barkeeps for a feast on responsibly raised heritage-breed pig and bottomless rounds of beverages.

Boomtown Brewery will be hosting a Spring Forward Family Fest event fun for all ages. Adults can kick back and enjoy Boomtown’s unfiltered, full flavored beers while children get their face painted, play in a bounce house, do arts and crafts, play games and more. Maple Block Meat Co will also be on hand with their awesome bbq to feed everyone. There is no fee to attend the festival.

“Top Chef” Season 14 Winner Brooke Williamson’s Hudson House turns nine on Sunday and they’re throwing a fiesta from noon to 5 p.m. The Redondo Beach gastropub will host an outdoor fiesta featuring live mariachis, a taco and elote station, cold craft beers from the Stone Hop Wagon, a Michelada bar, and Corralejo Tequila and Sombra Mezcal cocktails. Guests will also be gifted with a Hudson House anniversary t-shirt along with other fun surprises to be announced.