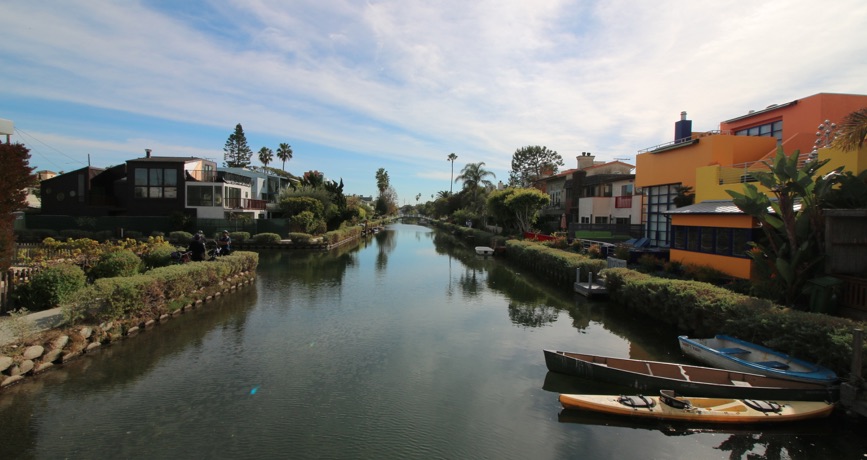 The Venice Canals. Credit: Brian Champlin / We Like L.A.

Arashi, barcito, Bottle Rock and The Briks will be participating in the South Park Crawl, a culinary event bringing together local chefs, restaurant owners and members of the Downtown community. The crawl starts at the corner of 12th and Grand (in front of barcito) in three different sessions (5:30, 6:30 and 7:30pm) Guest will get to taste food and drink pairings at each restaurants. Tickets can be purchased in advance online or at the door for $36.

Cinefamily is putting on a free screening night called Outsider Cinema Night. This first come, first serve (remember to register online in advance) night will also include an appearance by Laz Rojas. The fun starts at 7:30pm.

Established in 1992, The Pan African Film Festival (PAFF) is a non-profit dedicated to racial tolerance through the exhibition of film, art and creative expression. This year’s L.A. festival will happen over a span of 11 days (February 4-15) and will feature hundreds of new films plus numerous special events and panels.

Timeless music and dazzling dance moves come to life at the Hollywood Pantages Theatre as Dirty Dancing one of the most beloved dance films of all time takes center stage. Are you ready to have the have the time of your life? Get more information and discount tickets via Goldstar.

Fast casual Top Round on La Brea avenue is expanding their menu and hours to 6:00am, opening up for morning breakfast. The menu offers up tasty sandwiches like the steak & egg, breakfast blt and a runny egg  sando with hash browns and your choice of morning meat. Stop by this Tuesday from 8:30pm – 10:30pm and get a FREE breakfast sammie!

7. Wolfgang Puck celebrates with a Traveling Night Market and Dinner

WP24 in DTLA is holding a special Chinese New Year evening of events that begins with a “night market” featuring live stations preparing Chinese delicacies, followed by the festive tradition of a colorful lion’s dance, and concluding with a sumptuous three-course dinner. The Night Market opens at 6:30pm with a traditional lion dance, with seated dinner at 7:30pm. The entire evening is priced at $110 per person with an additional $35 per guest for an optional wine pairing.

8. Free Day at The Autry

The Autry National Center of the American West is free on the second Tuesday of every month.

Sassafras is putting on a New Orleans-style jubilee with plenty of southern flavors and New Orleans flare. To celebrate Fat Tuesday guest will receive a complimentary Mandarin Napoleon French 75 (from 5:00pm – 6:00pm) upon arrival and during Sassafras Happy Hour guest can sample new cocktails for just $8 while noshing on customary Crawfish Boil offerings. Live entertainment, including music by Mudbug Brass Band and burlesque performances will ring throughout the evening, and NOLA’s beloved Abita Brewery is poised for an all-night tap takeover.

A co-ed dodgeball league in Westchester called the World Dodge Ball Society, is holding a open gym social/mixer this Wednesday. The dodgeball organization has gotten to play at the Staples center and often have trivia and theme nights. The mixer is free to new players (as well as those who are currently registered for the season). A run-down of the rules will take place at 8:00pm and everyone can play until 10:00pm.

During the Golden Age of Hollywood, legendary film director Cecil B. DeMille opened Willard’s Chicken Inn (a gathering place for Hollywood stars) on the site where Messhall stands today. In honor of what came before, Messhall is dedicating Wednesday nights to Willard’s “country-colonial’ style chicken, where guest can get a plateful of crispy friend chicken served with mashed potatoes, sawmill gravy and grilled broccolini for just $19.

Serial Killer Speed Dating is a Valentine’s Day event, where people go on 5 minute speed dates, never knowing if they’re talking to a potential match…or a potential murderer. Taking place at BarFoodLA (12217 Wilshire Blvd) from 8:00pm – 10:00pm. Tickets are $20 + $10 minimum at bar (so buy a drink!) and must be purchased online prior to the evening. We spotted a promo code that can knock $5 off your ticket price simply use the code “valentine” to redeem.

The wildly entertaining Radio Picture Show is back at The Virgil. RPS invites talented writers, actors and comedians to share true stories inspired by a song or picture of their choosing. Often this media is used in unexpected and hilarious ways. Hosted by Lauren Cook and Shauna McGarryand the show will feature: director and comedian Bobcat Goldthwait, comedian Byron Bowers, comedian Kristen Studard, poet Derrick Brown and comedian Claire Titelman.

16. The Unauthorized Musical Parody of The Devil Wears Prada

Come experience an incredible variety of books, art catalogs, monographs, periodicals, zines, and more at the 2016 LA Art Book Fair, taking place at the Geffen Contemporary at MOCA from February 11-14.

In conjunction with the book fair, you might also want to check out the floating library installation that’ll be on display at Echo Park Lake over the same 4-day period (Thursday to Sunday).

This month the Downtown Art Walk is recognizing the Grammys and National Black History Month by honoring prolific artist and producer, J DILLA.

21. Underwire Comedy at the Hollywood Improv

Come down to the Hollywood Improv for a night of laughs with Underwire Comedy an event benefiting Planned Parenthood with Erin Foley, Jodi Miller, Amy Anderson, Mary Patterson Broome, Michelle Miracle and more

27. Dinner and a Movie Lady and the Tramp Style

In honor of Valentine’s Day, El Capitan guests can celebrate Valentines Day February 12-14 with a candlelit dinner and Disney’s animated classic “Lady and the Tramp”. The pre-movie meal will be catered by Miceli’s (LA’s oldest Italian restaurant) at the El Capitan Theatre, seating is limited, and reservations for dinner are required. Dinner will include your choice of Spaghetti with Marinara Sauce or Spaghetti with Meatballs, a garden salad, Miceli’s famous dinner rolls and mini cannoli. Get discount tickets to the movie via Godstar to you can splurge on the dinner!

28. Night Dive at The Aquarium of The Pacific

Night Dive is an adults-only party at the Aquarium of The Pacific in Long Beach featuring local bands, DJs, art works, cocktails, and plenty of tasty grub from an assortment of food trucks.

There’s a Indian street food pop-up that’s taking place this Friday and Saturday (7:00pm – 11:00pm). It’s popping up behind Daily Dose Cafe at a walk up window that Daily Dose owner Sarkis Vartanian operates, called The Kitchen on 7th. IMLI is an Indian street food concept that will open in Spring at 4th and Main in DTLA. It’s the brainchild of husband and wife Nish and Ashwini Jhaveri, their friend, celebrated Indian food blogger Nikhil Merchant, and Himanshu Barjatiya. Their goal with IMLI is to introduce LA to REAL Indian street food, from all over the continent, highlighting the incredible diversity of street food there. We’ll be there at the pop-up this Friday stop by and say hi!

Head to Glendale and check out the Museum of Neon Art. Just recently they held a grand opening and now it’s open to the public Friday, Saturday and Sunday during winter.

Rhonda dreamed up a sexy Lover’s Ball at new mega club Union. The party takes place Friday and the musical lineup includes Bonobo, Guy Gerber, The Martinez Brothers, and more. This event is 21 and up, couples, singles, minglers anybody who loves a good rave is welcome.

33. Free Museum Day at The Long Beach Museum Of Art