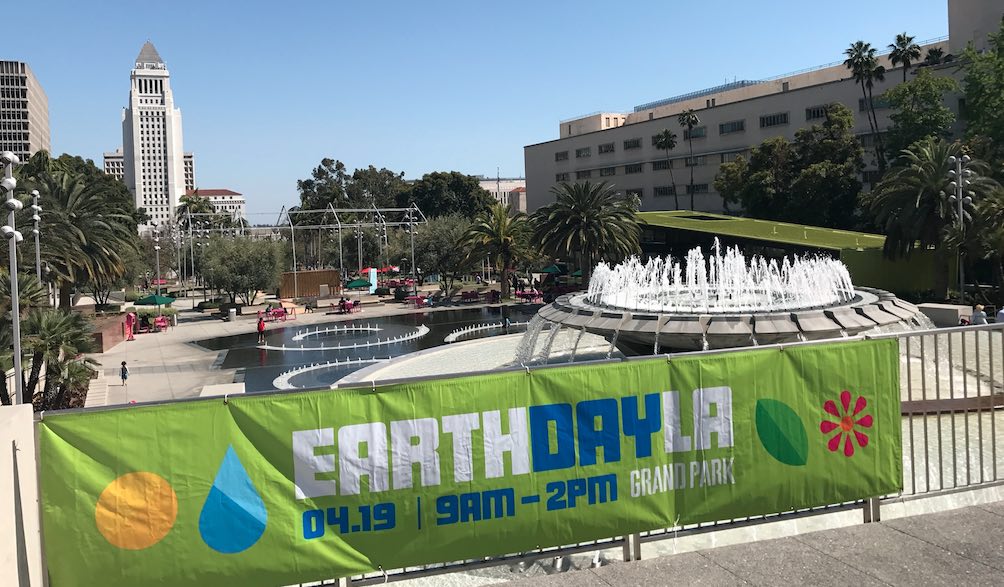 1. Vagabond Cheese Company and Angel City Brewery are teaming up (again) for a totally nerdy beer-pairing series that’ll boost both your appreciation and your knowledge of the ways beers and cheese can work together to create delicious results. The new three month-series starts this Monday with a focus on the beers and cheeses of Belgium.

2. Every third Monday of the month head to Santa Monica’s Basement Tavern to see top comedy headliners for free during Basement Comedy. This months performers include Taylor Williamson and Adam Ray. FREE

4. Grand Park is hosting a site specific installation called The Portals Project, an immersive experience where Angelenos get to connect and communicate to people around the global in real time from Amman, Berlin, Mexico City and more. Happening April 10-23. FREE

5. Hot Tub With Kurt And Kristen at The Virgil is one of the most popular weekly variety shows happening on a Monday in Los Angeles.

6. Head to iOWest for Queer Window, a variety show where performers take a deep dive into the past and the present of the LGBTQ community and culture. From Paris is Burning, John Waters films to gay bars and broadway, the show will feature musical stylings of Micah James, drag from Kitty Meringue, stand-up from Daniel Franzese and more! Hosted by Zack Colonna.

8. Ahmanson Theatre presents the much beloved Tony Award-winning Stephen Sondheim musical Into the Woods. The new rival of the classic will be performed by the acclaimed Fiasco Theater production. Happening throughout the week. DISCOUNTED (via Goldstar)

9. National Canadian Film Day will be celebrated for two days! On Tuesday and Wednesday the Cinefamily will host free marathon screenings of Canadian films all thanks to The Consulate General of Canada in Los Angeles. FREE

10. The 1st Annual L.A. Get Down Festival will celebrate hip hop and spoken word from April 18-30. Presented by Greenway Arts Alliance and Da Poetry Lounge the events will include legendary writers, poets, musical performances and leading workshops celebrating diversity.

11. Head to LACMA to catch a classic flick every Tuesday as part of their matinee series. This Tuesday features The Scarlet Empress. Tickets cost just $4.

BONUS: Tuesday is tax day! Make sure to take advantage by checking out one of  10 L.A. Spots Where You Can Get $1 Drinks on Tax Day (and other great deals)

13. Celebrate Earth Day 2017 with an educational fair at Grand Park! Families, friends and kids are invited to the Downtown L.A. park for a day filled with fun through various vendors, workshops, talks and more. FREE

14. FLIX at FIG screens Guardians of the Galaxy at FIGat7th in DTLA. The free movie screening happens every third Wednesday of the month. A live DJ and happy hour kicks off the night at 6 p.m. and the film begins at 7 p.m. FREE

15. Neon Silent Disco heads to The Bloc in Downtown Los Angeles for a free dance party with neon swag. FREE

16. Every first and third Wednesday of the month, BEAR CITY brings free comedy and free pizza to Que Sera in Long Beach! FREE

17. Enjoy an evening of Armenian music at the Hammer to commemorate the anniversary of the Armenian genocide. The concert features the UCLA Armenian Music Ensemble, VEM String Quartet and more. FREE

18. Every third Thursday of the month head to the Queen Mary’s Observation Bar for Local Band Hangout night.

19. Dave Chappelle and Neal Brennan cult classic stoner comedy Half Baked will screen at The Wiltern this Thursday for 420.DISCOUNTED (via Goldstar)

20. Brennan’s Pub in Marina del Rey will be temporarily closing their doors at the end of April, and to mark the hiatus they are throwing an “End of an Era” celebration on Thursday, which will of course include their signature turtle races.

21. The Rockwell Table & Stage presents The Unauthorized Musical Parody of Mean Gurlz. Relive the catty girl-clique “The Plastics” through song and dance. The show has been selling out to great acclaim. Happening Thursday and Friday.  DISCOUNTED (via Goldstar)

22. The Venice Art Crawl will host Music Connects Us: Photography & Art Show this Thursday at Runway at Playa Vista. This VAC fundraiser will transform the 3,800 square foot space into an urban art installation with over 70 artists featured! DISCOUNTED (via Goldstar)

25. The Great Horror Movie Nights at the Old Zoo in Griffith Park will screen Texas Chainsaw Massacre. The event will feature plenty of pre-show entertainment including games, prizes, and roaming scare-actors.  Discount tickets are available via Goldstar while supplies last. DISCOUNTED (via Goldstar)

26. The Groundlings: The Completely Different Late Show is a hilarious improv show by the cast of the Groundlings’ Main Company. Audience shout suggestions throughout the night for improvisational scenes performed by some of the best in the business. It’s also a testing ground for brand new material for the Groundlings’ main show. DISCOUNTED (via Goldstar)

29. Odd Nights heads to The Autry for their signature outdoors shopping experience. There will also be loads of shopping, live music and a full bar.

30. Splendid, Ella Moss and 7 for All Mankind are joining forces with one epic warehouse sale happening in Vernon for one day only. Prices start at $5, we’ve been told this is the biggest sale yet! Shop from 8 a.m. to 2 p.m. Location: 5500 South Boyle Ave, 1st Floor Vernon, CA 90058