This week, from Monday, June 12 to Friday, June 16, features Moonlight Movies on the Beach, the Dew Tour in Long Beach, Friday Flights at the Getty, Sleepless at The Music Center, the KTOWN Night Market and LOTS more. 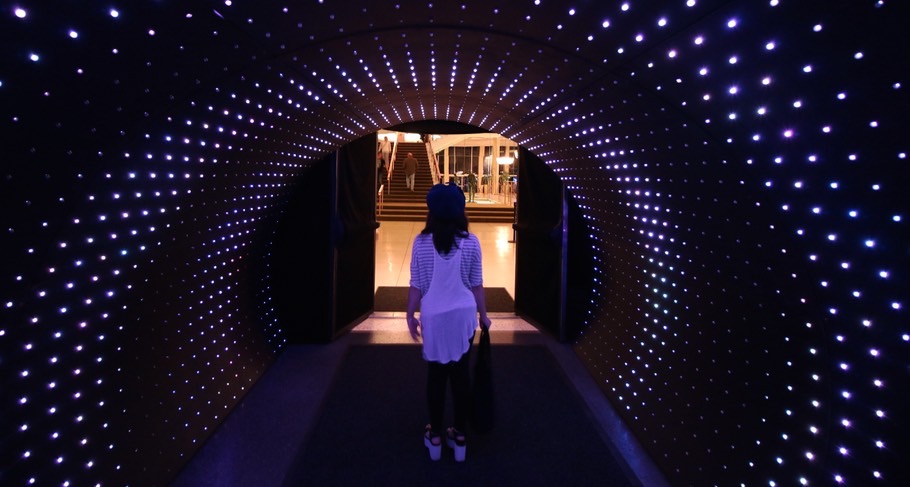 The entrance at Sleepless at The Music Center from Sep. 2016. Photo by Brian Champlin / We Like L.A.

2. Brooklyn based musician Nick Hakim will perform a set at Amoeba Hollywood. FREE

3. A live show of podcast Harry Potter and the Sacred Text heads to the Last Bookstore this Monday. FREE

5. Get some laughs in this Monday with Boss Jr. and their team of hilarious improvisers. Bonus they also give out free baked goods! Happening at UCB Sunset.

UPDATE: An earlier version of this article stated that Moonlight Movies on the Beach screening series opened on Tuesday, June 13. The series begins this Thursday, June 15. We apologize for the error

8. Pop-Up Magazine returns to the Theatre at the Ace Hotel featuring one-of-a-kind live storytelling by journalists, authors and entertainers.

10. People Power film series at the Hammer Museum feature films that examine grassroots political movements around the world. This weeks screening is Bringing Down a Dictator. A chronicle of the defeat of Slobodan Milošević in October 2000 using an ingenious nonviolent strategy of honest elections and massive civil disobedience. FREE

11. Spend an evening poolside and beneath the stars enjoying dinner, cocktails and a classic film as Mr. C’s Poolside Cinema returns with a screening of Dirty Dancing.

12. StarChefs will host the L.A. Rising Stars Awards + Tasting Gala at Vibiana in Downtown. The event will include an award ceremony and walk-around tasting of award winning chefs, pastry chefs, bartenders, artisans, and sommeliers.

15. Grand Park is ready to whip you into shape during their Summer Bootcamp series happening every Tuesday evening from 5:30 to 6:30 p.m. All fitness levels are welcome! FREE

17. Get ready for another night of riveting storytelling, absurd one-liners and one-of-a-kind jokes: the Moth Main stage is returning to Los Angeles for a one-night show titled Domestic Tethers.

18. Opening night for Alexi Kaye Campbell’s play The Pride at the Wallis Annenberg Center for the Performing Arts is this Wednesday. The play takes place between 1958 and 2008 examining the changing attitudes of sexuality over the last 50 years. The Pride plays all week. Check for discounted tickets  before making your purchase. DISCOUNTED (via Goldstar)

19. Radio Picture Show , a monthly storytelling event, is back at The Virgil this week with tales inspired by songs and images.

20. The Moonlight Movies on the Beach series is back for 2017 with a screening of Rogue One: A Star Wars Story at Granada Beach. FREE

21. Concerts on The Bloc in Downtown Los Angeles is a free summer concert series with free beer in the mix! Curated by Sofar Sounds, the series kicks off with the R&B and soul sounds of VINCINT. FREE

22. The 2017 Dew Tour’s Summer Skate Competition in Long Beach (June 15-18) is four days of skateboarding featuring a three-part street course, stand-alone bowl, interactive sponsor village, plus a host of individual and team competitions. Standing events are free to attend. For special passes check for discounted tickets before making your purchase. DISCOUNTED (via Goldstar)

23. Summer Movie Fest at Cal State Northridge is a free weekly movie night taking place at dusk on CSUN’s Oviatt Library Lawn. The series will kick off with The LEGO Batman Movie. FREE

24. Black Rabbit Rose, part theater for magic and variety acts and part craft cocktail bar, takes you into their retro-style cabaret shows set in an intimate and mysterious setting. DISCOUNTED (via Goldstar)

25. Ever wish you were in a Sherlock Holmes story? Will now is your chance! Get immersed in a production full of mystery and intrigue thanks to Unbound Productions where the audience follows the actors throughout a creepy Santa Anita Train Depot. Check for discounted tickets before making your purchase. DISCOUNTED (via Goldstar)

27. Alzheimer’s Greater Los Angeles hosts Memories in the Making an gallery exhibition and auction of artwork created by people with Alzheimer’s. The event is free to attend and helps raise funds for programs and services for AGLA. Happening at Building Bridges Art Exchange in Bergamot Station Arts Center. FREE

29. Friday Flights at the Getty is back this year with another round of live interdisciplinary artist performances. Experience epic art, live performances and scenic views at one of L.A.’s most popular museums. FREE

30. KTOWN Night Market will feature over 100 local food and merchandise vendors along with food options such as fish cake, sushi tacos and fried chicken, plus a sample sale and live music.

31 Celebrate summer while watching movies that rock (i.e. feature great music) during Outdoor Movies at the Skirball. The summer lineup kicks off on June 16 with School of Rock. Check for discount tickets before making your purchase. DISCOUNTED (via Goldstar)

32. The Music Center After Hours Sleepless turns its attention to the Walt Disney Concert Hall and its hidden spaces and maze like architecture. DJs, sonic experiences, projections, interactive installations and dance parties will all take place in rarely accessed areas, backstage and even private rooms.

33. Take a moonlight hike with Tree People and explore Coldwater Canyon Park at night. Great for family and friends the hour-long guided hike begins promptly at 7:30 p.m and ends at 8:30 p.m.

34. Greenbar Distillery is hosting a cocktail classes in Downtown LA this Friday with prohibition era cocktails.

36. The Groundlings: The Completely Different Late Show is a hilarious improv show by the cast of the Groundlings’ Main Company. Audience shout suggestions throughout the night for improvisational scenes performed by some of the best in the business. It’s also a testing ground for brand new material for the Groundlings’ main show. DISCOUNTED (via Goldstar)

37. Constitution Happy Hour at AMMO at The Hammer continues this Friday with a focus on the question “Does the Emoluments Clause disqualify Trump from the presidency? ”

38. Friday is pay-what-you-can night at the Odyssey Theatre for their current production of KISS by Chilean playwright, Guillermo Calderon. 8 p.m. show with free wine!

39. DARK is a stand up showcase where some of the best comics in LA perform completely in the dark. Audience members nor the comics will be able to see each other. The experimental show takes place at The Lyric Hyperion Theater in Silver Lake.