Nice to see you too.

Temperatures are expected to rise into the 90s and 100s as we head into the weekend, with the heat accompanied by a huge spike in humidity as well. That combo could be a recipe for some serious floods, thunder, lightning, and pretty much all kinds of things Angelenos aren’t necessarily used to to seeing.

“Any storms that develop by Thursday will be capable of producing heavy downpours, dangerous cloud-to-ground lightning, strong gusty winds and flash flooding,” the National Weather Service stated in a bulletin reported by the LA Times.

L.A. County is most likely to be hit by flash floods and downpours in mountain regions, the inland valley and desert areas, but we could also see flooding along the coast as well.

“During this time, people at risk of heat-related illness should be extremely cautious and seek shelter in air conditioning if possible,” the NWS warned.

Bottom line: Keep your eye on weather updates and plan your weekend accordingly. 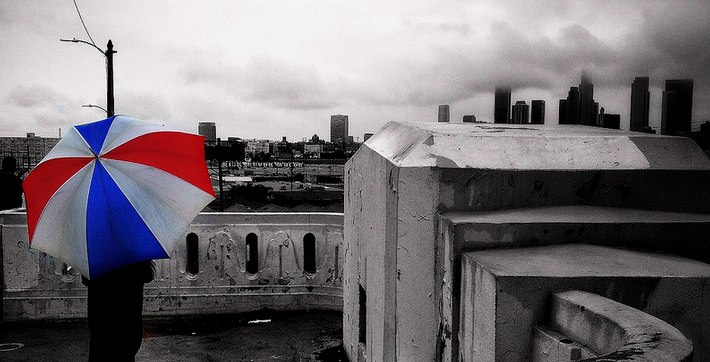 The changes to the local weather are believed by climatologists to be caused by El Nino, the weather phenomenon triggered by a warming of Pacific Ocean waters west of Peru, typically occurring every two to seven years. 2015-16 is predicted to be the most powerful El Nino since the winter of 1997-98 (for those old enough to remember).

See refresher video on El Nino below via Met Office (they’re the NWS for the U.K.):

So your first thought is probably the same as mine… won’t this massive stormy season cure the water woes of Southern California?

Well, not exactly. The rainfall increases will definitely help in some respects, but we’re facing a massive deficit in water reserves, and you have to keep in mind that the majority of the state’s reservoir’s are in northern California, and El Nino doesn’t necessarily equate to increased rain  and snowpack in NoCal, which is essential to replenish our state’s supply.

For more information, I urge you to check out this Q&A the Times did with some details on what El Nino might mean for the drought in California.

In the mean time, stay safe out there!