A story like this is creepy enough to scare the pants off even the most confident parent.

Two men allegedly tried to buy a 2-year-old boy from his mother for $100 in suspected human trafficking attempt at a market in Covina, police said Thursday.

The incident occurred around 6:30pm on Wednesday while a 34-year-old mother and her toddler were in the check-out line of a Baja Ranch Market in the 400 block of South Citrus Street.

A man approached her while she was waiting and started complimenting both her and her child, calling them, “very beautiful.” 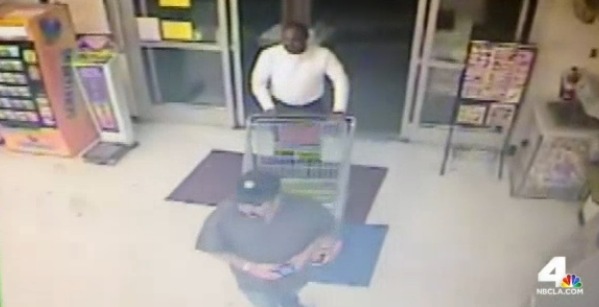 The two suspects were caught on surveillance footage now being released by police to help aid in their arrest. Screenshot from NBC Los Angeles.

Then the creep factor went up by a factor of about a thousand, per NBC Los Angeles:

“The gentleman asked to purchase her kid for a hundred bucks,” Covina Police Sgt. Gregg Peterson said. “She was somewhat surprised by that, declined the invitation, obviously.”

After the offer was rejected, the woman waited in the store for a few minutes for the man to leave, and once she felt safe she exited and headed for her car, but then the suspect pulled up in front of her store in a brown / champagne colored Honda Pilot, this time with a second man riding in the passenger seat.

From the car, further creepy compliments were made and  the offer was extended again to purchase the child. The first man got out of the car and dropped a $100 bill in her grocery cart, “He was saying, ‘Let me buy the child, let me buy the child,'” Peterson said.

The woman froze, too frightened to even cry for help, now believing that her son was about to be kidnapped. However after a few moments the suspects departed south on Citrus Ave.

Because she was without her cell phone at the time of the incident, the woman then drove immediately to the police station to report what had just happened.

The first man is described as about 45 years old, standing 5 feet, 8 inches tall and weighing about 200 pounds. He was wearing blue jeans and a brown button-down shirt at the time of the incident.

The passenger in the car was described as a man in his 50s, about 6 feet tall and weighing about 215 pounds. He was wearing tan slacks and a long-sleeved white shirt.

Police have released surveillance images from the market in an attempt to identify the two men. Anyone with information is asked to call the Covina Police Department Detective Bureau at 626-384-5612. Anonymous tips can be made by calling Crime Stoppers at 800-222-8477.