We’ve got driver-less cars, hover boards (not the kind we want but still), and now the city has a robotic garage that’s doing all the work so your parking experience is hassle-free.

The first municipal robot parking garage built on the West Coast had its grand opening Tuesday, May 24 in West Hollywood for a project that originally broke ground in March 2014.

So how does it work?

Drivers park their car in one of four ground-level entry bays, get their ticket, and the car is then transported to an open parking space and brought back down when you present the ticket.

Here’s a video demonstrating the process:

Since there’s no need for ramps or driveways and the cars can be stack-parked, the building can hold 200 cars, three times what the previous structure on that lot held.

Each of the four bays has a hand-painted mural by artists  Kim West, Art of Chase, Bronwyn Lundberg, and MONCHO1929. The garage features a large glass pane where curious people can watch as mechanical shuttles carry vehicles in and out of bays. The window also has a fixed-art installation by renowned public artist Ned Kahn, with a grid of large clear marbles that reflect moving parts inside the garage. 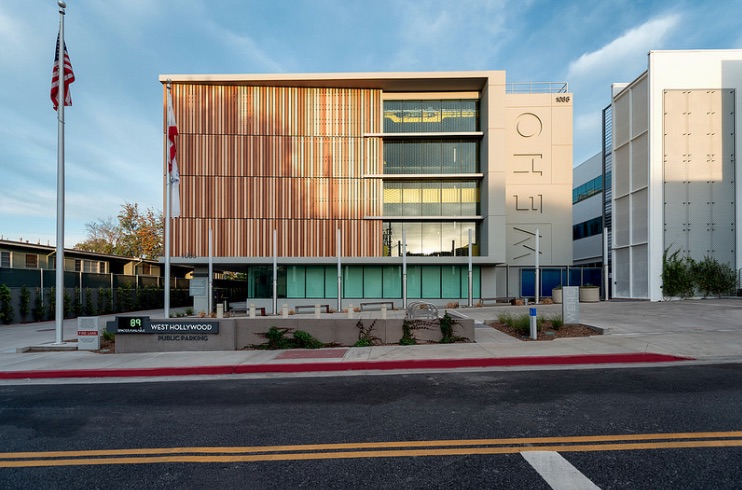 The eco-friendly structure contains roof-mounted photovoltaic solar panels, features the use of a sustainable material made from recycled grocery bags, and uses drought-tolerant landscaping. The lack of circling cars also means a decrease in CO2 emissions that’s the equivalent of taking 92 cars off the road, according to CurbedLA.

The robotic garage takes up  7,000 less square feet than a normal garage of the same capacity, and in this case the space savings was used for a Community Plaza, a park-like space with built-in benches, tress, and a water feature.  The plaza contains a stage for community events and holds a large-scale triptych art-banner installation, a collaboration with artist MONCHO1929 and WeHo City Poet Steven Reigns.

The building cost approximately $18 million to construct and the city paid for it using issued bonds, according to WeHoville.