The Zoot Suit Riots: An Effed Up Chapter in Los Angeles History 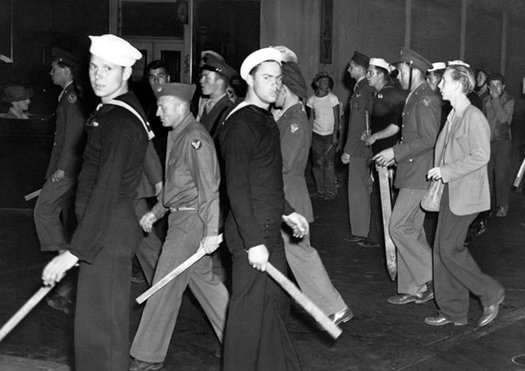 It’s not always pretty, but you’ve got to know your history. And as far as ugly goes, the Zoot Suit Riots recall one of the worst chapters in the story of Los Angeles.

Still, it’s definitely worth taking a look back, if for no other reason so we can learn lessons that may help us not repeat the same mistakes in the future.

Now, many of us children of the 1990’s may only be familiar with the phrase “Zoot Suit Riot” because of a Cherry Poppin’ Daddies song of the same name (remember that thirty second phase when everyone was into swing music?), but in all seriousness the violence that took hold of L.A. over the summer of 1943 was, indeed, quite harrowing.

Some quick cliffs notes for those who may be unfamiliar (after the jump):

– A murder case (The Sleepy Lagoon Murder) precipitated the arrest and subsequent conviction of 17 Mexican American suspects in January of 1943.

– The uproar over the conviction (years later thrown out by court of appeals) raised the temperature on racial and ethnic  tensions in the city of Los Angeles to a boiling point. Many media outlets were calling for an all-out war against “zoot suiters” which were associated with pachuco gangs across Los Angeles.

– The zoot suit style of dress was customarily a flamboyant long coat with baggy pegged pants, wide through the leg but cuffed at the ankle. It might also include a pork pie hat, a long key chain, and shoes with thick soles.

– On June 3, 1943, the riots came to a head when when white naval servicemen claimed they had been attacked by pachuco gang members in downtown on Main Street. Police were called to the scene. A melee began, and quickly evolved into something worse.

– As the riots progressed, servicemen were being bussed in by the truck load (even from out of state), in an effort as the saw it, to cleanse the downtown area of a malicious gang influence.

– The subsequent week long assault was broadened from just zoot suiters in downtown to the further outreaches of east Los Angeles. Virtually any Mexican male walking the streets became a target. In all, about 150 people were injured and police arrested more than 500 Latinos on charges ranging from “rioting” to “vagrancy

– The riots effectively eased on June 8, 1943, when military leaders declared the city of Los Angeles off limits to servicemen (perhaps in an effort to maintain chain of command over their soldiers more than anything).

The embedded documentary (see above) from PBS goes into detail about the events that led up to the Zoot Suit riots and provides an interesting perspective into the entire series of events.

A highly recommended watch if you have the time.