July 4 is just around the corner! Do you know what you’re doing on Tuesday?

Whether you want to visit an art museum, attend a rooftop dance party, view an outdoor movie, see a traditional fireworks show, or savor a gourmet dinner followed by pyrotechnics, we’ve got you covered.

Below is our quick, easily scannable list of 16fun things to do in Los Angeles on Tuesday, July 4, 2017. Enjoy! 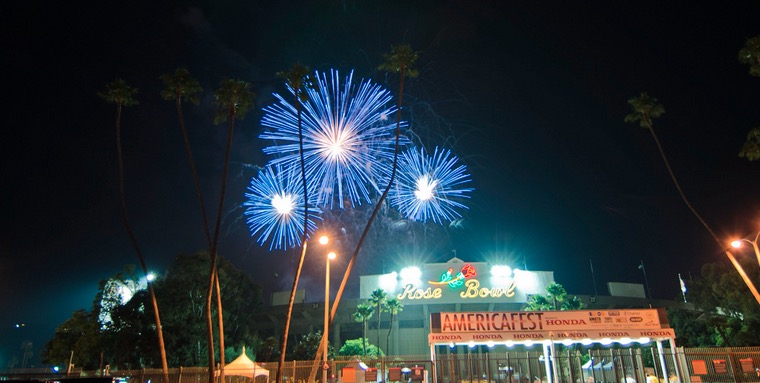 Fireworks at The Rose Bowl for July 4. Credit: Daniel via flickr cc

1. See fireworks at the Rose Bowl. Americafest is still going strong after 91 years!

2. Attend a rooftop soiree at the Ace Hotel in Downtown L.A. Hang out by the pool and listen to Motown tunes, along with classic soul, disco and funk, during California Sol 4th of July.

4. Enjoy an oceanside holiday during the Redondo Beach 4th of July Fireworks at Seaside Lagoon. Situated next to a lagoon, the day will include giant inflatable slides and a DJ playing both patriotic and party music.

6. Watch an outdoor movie. Cinespia at Hollywood Forever is hosting a screening of the classic sci-fi adventure Jurassic Park, followed by fireworks.

7. Go to Grand Park for a festive afternoon and evening during its 4th of July Block Party. Enjoy live music, dancing, 30+ food trucks, and dazzling fireworks ascending from the roof of nearby Dorothy Chandler Pavilion.

9. Another option for celebrating Independence Day by the ocean is this free event in San Pedro: the 67th Annual John Olguin Southbay July 4th Spectacular.

10. Celebrate the unveiling of a new monument slated to be the Statue of Liberty of the West Coast during the L.A. Freedom Festival in Century City.

11. If you’re in the West Valley, you might want to check out the July 4th Fireworks Extravaganza in Woodland Hills, with food from 15 or more local eateries and a 15-minute pyrotechnic display.

12. If you’re near Long Beach head over to the Queen Mary for their Fourth of July party that includes a performance by The Pointer Sisters plus family games, arts, crafts, and a big-time fireworks spectacular. Discount tickets for the show are available (while supplies last) via Goldstar.

13. Reputedly the best fireworks show on the Westside is July 4th at the Marina, with two prime spots in Marina del Rey ideal for watching the show, complete with synchronized music.

14. The Hollywood Bowl is famously one of the best spots in L.A. for watching fireworks. This July 4, a dazzling spectacle will set the skies above Hollywood aglow, capping a performance from three-time Grammy-winning a cappella ensemble Pentatonix.

16. Fireworks, food trucks, live music, games and prizes add up to a day of family fun during the Culver City Fourth of July Fireworks Show.