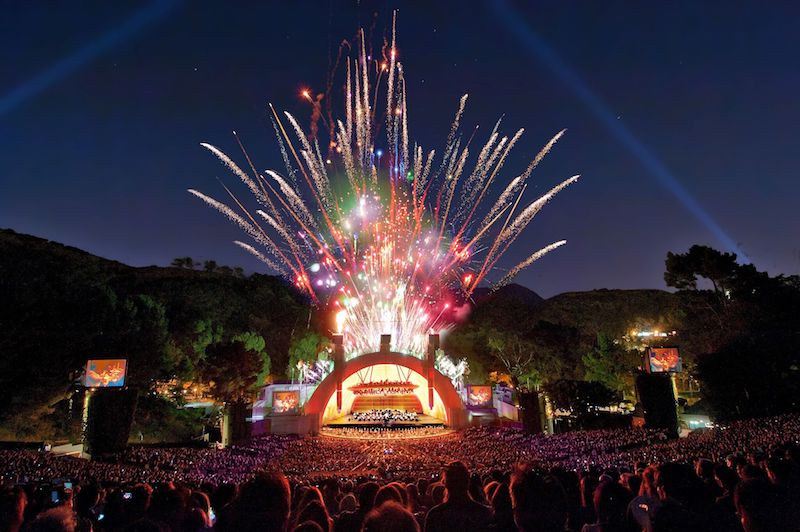 July 4 is almost here! Have you made plans for Wednesday yet? Whether you want to visit an art museum, attend a rooftop barbecue, view an outdoor movie, a traditional fireworks show, or rock out to ’80s icons the Go-Go’s, we’ve got you covered.

1. See world-class fireworks at the Rose Bowl: Americafest, now in its 92nd year, is still going strong. This year’s pre-fireworks entertainment will include a Michael Jackson tribute and a motorcycle stunt show. Check for discounted tickets via Goldstar.

2. They’ve still got the beat. See one of the greatest bands of the new wave era — L.A.’s own Go-Go’s — as dazzling fireworks set the skies above Hollywood aglow at the Hollywood Bowl’s July 4th Fireworks Spectacular.

3. Merge patriotism with kitschiness at ‘Merica Fest, a day of live music, tacos, and lots of beer at Angel City Brewery in DTLA.

7. Begin Independence Day early (9:30 a.m.) at the 12th Annual Santa Monica 4th of July Parade. While you’re in the Main Street neighborhood, you might want to hit up the special pie and coffee pop up at Sweet Rose Creamery, happening from 8 a.m. to noon.

8. If you’re in the West Valley, you might want to check out the July 4th Fireworks Extravaganza in Woodland Hills’ expansive Warner Ranch Park, featuring food offerings from more than 20 local restaurants and a 15-minute pyrotechnic display.

9. Watch fireworks from a breathtaking 950 feet above at 71Above located in DTLA. Dine on a four-course menu from chef Vartan Abgaryan, at $95 from 6 to 9:30 p.m. (reservations highly suggested) or head to the bar (walk-ins welcome) and cheers to while the LA skyline sparkles.

11. Go to Grand Park for a festive afternoon and evening during its 4th of July Block Party. Enjoy live music, dancing, more than 40 food vendors, and a dazzling fireworks show above Downtown Los Angeles.

12. If you’re near Long Beach, head over to the Queen Mary for their All-American Fourth of July Celebration that includes performances from three top tribute bands (paying homage to Tom Petty & the Heartbreakers, Journey and The Eagles), along with family games, arts, crafts, and a big-time fireworks spectacular. Check for discounted tickets via Goldstar.

13. A family-friendly day is awaiting you at the Palos Verdes Estates Old Fashioned Independence Day. Among the day’s highlights: an apple pie contest, face painting, a kid’s bike parade, and a magic show.

14. Attend a poolside soiree at Skybar at the Mondrian in West Hollywood. The Wicked Paradise 4th of July Pool Party and BBQ will include a DJ set from Totally Enormous Extinct Dinosaurs.

15. Reputedly the best fireworks show on the Westside, July 4th at the Marina offers two prime spots in Marina del Rey ideal for watching the show, complete with synchronized music.

17. Grab a picnic and head to East Hollywood to watch fireworks in Barnsdall Park. Set atop a hill, Barnsdall offers great views of multiple fireworks displays.

19. Enjoy a rooftop barbecue at the Highlight Room at the DREAM Hollywood Hotel. Hang out by the pool, watch fireworks displays from around the city, and enjoy BBQ meats (or a vegetarian burger), along with tasty sides.

20. Run alongside the beautiful Pacific Ocean during the 5K and Firecracker Dash in Redondo Beach.

21. Brewport in El Segundo is hosting a Backyard BBQ Block Party, with lots of barbecue, beer, and wine for sale.

22. Need something for a party that’s both sweet and patriotic? Head over to Pitchoun in DTLA for a macaron tower in the shape of an American flag, or to the Valerie’s Pie Stand Pop-up at Echo Park’s Valerie Confections for the Stars and Stripes Pie, heaping with fresh strawberries, blueberries, and vanilla cream.

23. Savor grilled oysters, burgers, and veggies at “lazy French” eatery Melody in Virgil Village, which is throwing a Fourth o’ July BBQ Sparkler from 4 to 10 p.m.

24. Palisades Rocks the Fourth returns for 2018 with music, food trucks, family-friendly activities and a fireworks spectacular, presented by the famed Pyro Spectaculars, at 9 p.m.

25. Your four legged friend can have fun too! The July 4th Dog Parade at Eastview dog park in Rancho Palos Verdes invited pups to dress up for fun and do some good by bringing pet food to donate at local shelters.