How do angelenos see the rest of California? Well the folks over at Thrillist have a few ideas, and a map they created displaying these stereotypical assertions makes for a good laugh.

To start off, here’s the top seven I spotted immediately that ring the most true:

1. The biggest thing we associate with driving along the 5 freeway in central California is… cow poop. TRUE (that smell tho).

2. Bakersfield is the armpit of California (and possibly America). TRUE, though I’m sure there are a few cities or states in the Union that could give it a run on a national arm pit level.

3. We’re really not sure if anything north of San Francisco is still technically part of California. Also, Redwoods! TRUE.

5. Our two biggest associations with the bay area: the Golden Gate Bridge and dirty hippies. TRUE, but I think Prius drivers and pot smokers could’ve made the map as well.

6. If you’re hanging out in southeastern desert area of California you’re probably either an old person, a meth-head, or you’re on your way to Coachella. TRUE

7. The best reason towns exist along the central coast is for day-tripping angelenos. TRUE. Santa Barbara and San Luis Obispo are perfect for this.

Want to see even more of these generalizations? Check out the map created by Thrillist below. 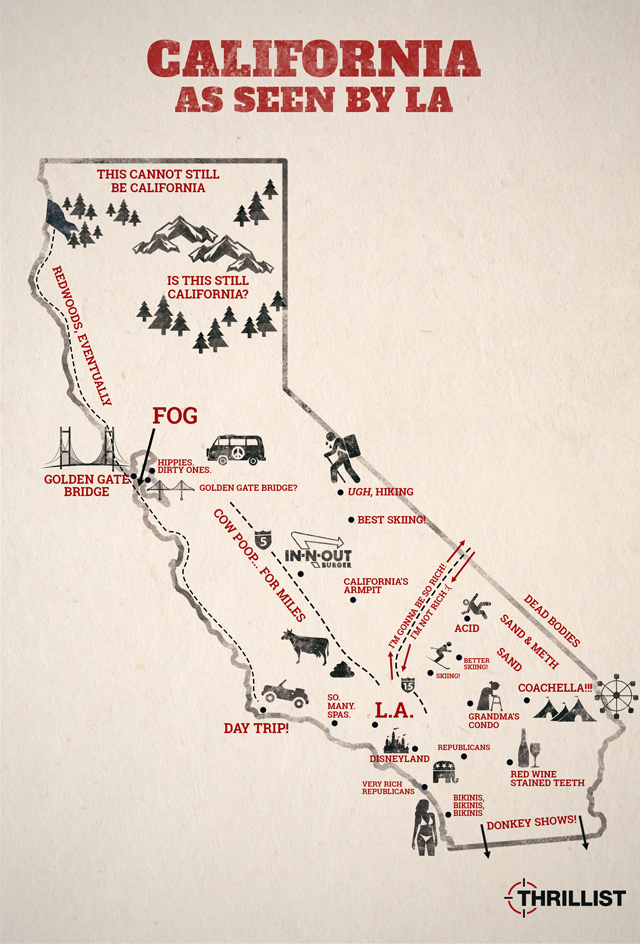