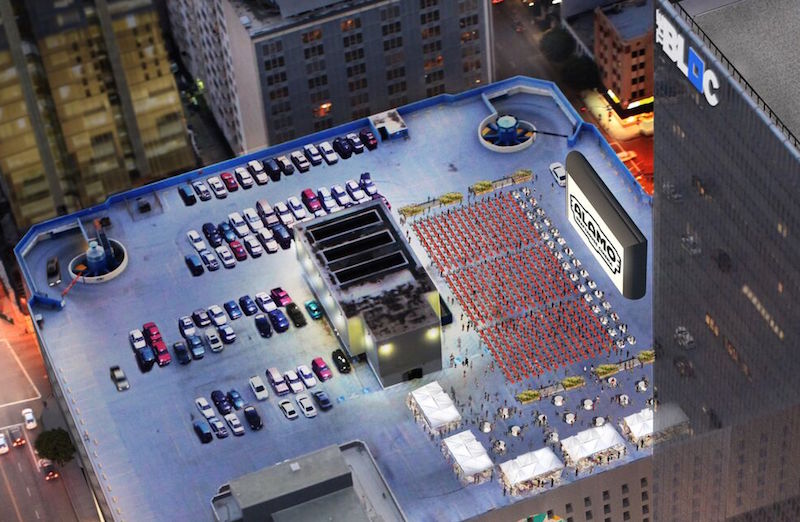 A rendering of the venue. Photo: The Bloc

A new rooftop music and film series is coming to Los Angeles, this one boasting excellent views of downtown. Skyline Sound + Cinema is a partnership among The Bloc, ALT 98.7 and Alamo Drafthouse Cinema, and it kicks off June 21 with a sing-along screening of The Greatest Showman.

The Bloc is the result of massive renovations to Macy’s Plaza and Broadway Plaza, which converted what Curbed LA referred to as one of the city’s ugliest buildings into a pedestrian- and transit-friendly, open-air plaza with retail, restaurants, and more. The Bloc will also contain Los Angeles’ first Alamo Drafthouse Cinema, though no official opening date has been announced.

In the meantime, the Austin-based theater will host a summer rooftop series on the Bloc’s massive roof featuring music curated by ALT 98.7 followed by a film. Each screening has room for 800 guests, according to a release.

The inaugural event will feature music from singer-songwriter Cary Brothers. Then, guests are invited to sing along with the 2017 musical drama The Greatest Showman, which stars Hugh Jackman in a loose retelling of circus entertainer P.T. Barnum’s life story.

Future events are planned for July 12, July 26, and August 9, but screening details have not been announced.