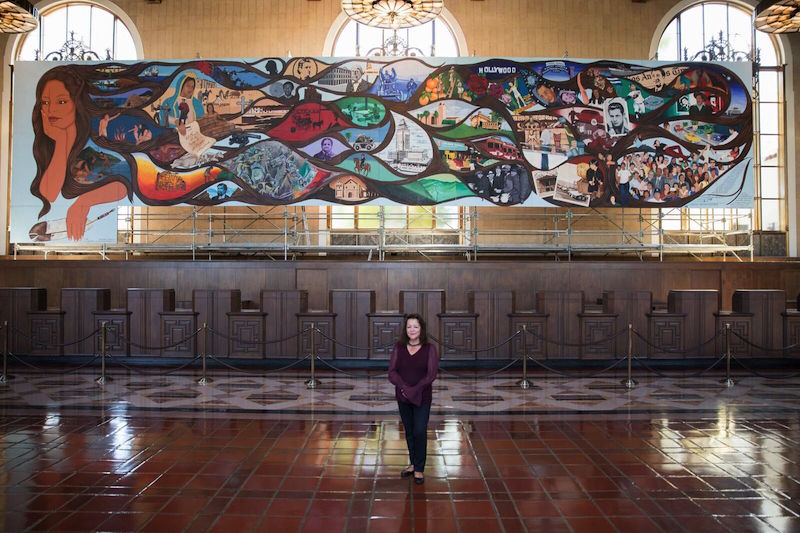 Barbara Carrasco in front of her mural, L.A. History: A Mexican Perspective, at Union Station. Photo via NHMLA

Chicano artist Barbara Carrasco’s 80-foot mural, L.A. History: A Mexican Perspective, will be the centerpiece of a new exhibit coming to the Natural History Museum in March, Sin Censura: A Mural Remembers LA.

Born in Texas, Carrasco and her family moved to Los Angeles when she was a young child. Her work has been featured in numerous galleries, museums, and publications, but this particular mural spent far too long in storage due to imagery deemed controversial by L.A. city officials. The exhibit’s title—which translates to uncensored in English—references this fact.

It should have hung outside of a McDonald’s on Broadway, according to the Los Angeles Times. However, city officials objected to 14 scenes that depicted the darker side of the city’s history. One referenced the lynching of 17 Chinese immigrants in Chinatown in 1871. Another depicts the internment of Japanese Americans through WWII. Yet another depicts the Zoot Suit Riots, in which mob violence broke out between American servicemen and Mexican, Filipino, and black Americans wearing the aforementioned suits in 1943. The mural also references David Alfaro Siqueiros’s mural, America Tropical, which was commissioned by the Plaza Art Center in 1932, but was similarly considered too controversial and painted over less than a year after completion.

“This was my chance to show what I wish was in the history books,” Carrasco via a statement. 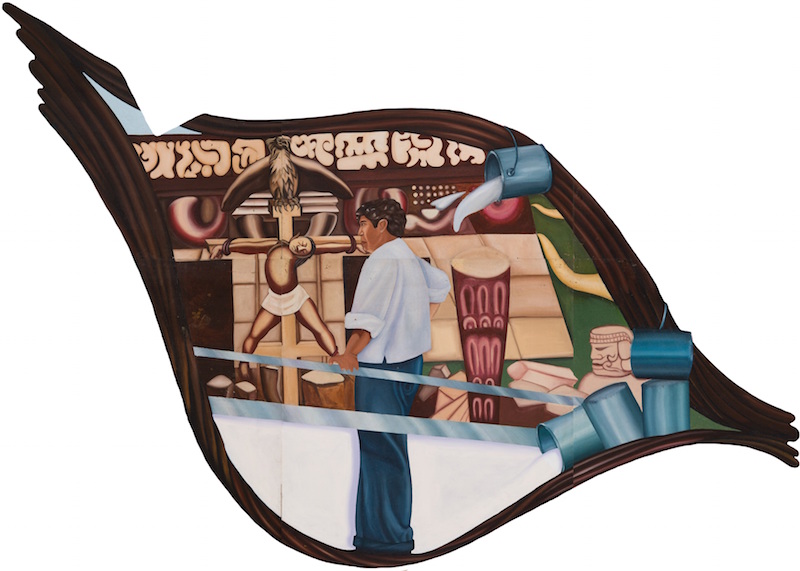 When Carrasco refused to amend her work, the project was scrapped and the mural went on to languish in storage for several years. It’s been displayed in full at Union Station—briefly in 1990 and again in 2017 as part of Pacific Standard Time: LA/LA—but this will be the first time it’s been shown in a museum setting.

The exhibit, which will be presented in both English and Spanish, also features a digital touchscreen that allows visitors to individually explore the various scenes, reference material used by the artist, and behind-the-scenes information. Sin Censura: A Mural Remembers L.A. runs March 9 through August 18, and is included with general admission to the museum. NHM tickets are $15 for adults; $12 for seniors, students, and children 13 to 17; $7 for children 3 to 12; and free for members.

UPDATE: The Natural History Museum has announced that Sin Censura: A Mural Remembers L.A. has now extended to run through April 21, 2019.