Sometimes after a long day of work and attempting to eat healthy (key word: attempting) those midnight cravings hit hard and there’s literally nothing in the world you want more than a donut. Thankfully, Los Angeles is always ready and willing to answer the call.

You may remember we have previously catalogued a list featuring some of L.A.’s best donuts and now we’re here to help you when you need that late-night sugar fix.

Our criteria is simple: Candidates must be open past 10 p.m. (and if it’s 24-hours all the better) and they must offer delicious donuts.

Among the options below you’ll find cronuts, crullers, custard-filled creations and all the rest of the classics so whatever you’re looking for you’re bound to find it.

Famous for their Homer Simpson (think The Simpsons), Matcha Green Tea, Lucky Charms, Fruity Pebbles and Oreo covered donuts, you will definitely want to try each of their delicious flavorful donuts. Their specialty donuts include the Snickers Bar (it’s as indulgent as you dreamed it would be with a snickers bar inside), and the Fruity Pebbles and Lucky Charms topped donuts. They’re probably most famous for their Panda Donut that gets people to pull out their phones as quickly as their wallets. It’s a nondescript shop with neon sign advertising that they’re open 24 hours seven days a week for those roaming the streets of Koreatown eager for a sugar fix at 2 a.m.

Their approach is back to basics so don’t expect trendy items but you can expect to pay $8 for a dozen (cash only) so there’s that. Open from 5 a.m. to 11 p.m.

There’s the cronut and then there’s the SKronut, their signature item with strawberries, chocolate, maple bacon, or glaze. SK’s version is airy in texture which is often missing from other bakeries making this trendy treat. Open 24/7!

In the same vein as fro-yo shops this place provides a DIY option where you can pick your donut, filling, and toppings including nuts, sauces, and spices (yup) to create your ultimate treat. If you’re too lazy to make something their signature collection’s are there for you. We recommend the Jets to Brasil with a balsamic reduction, cream cheese and strawberry jam or the Lemon Weapon with blueberry jam, lemon cream, and a tart lemon glaze. Closed on Mondays. Open Tuesday- Thursday and Sunday from 7 a.m. to 10 p.m. and Friday and Saturday from 7 a.m. to midnight.

Jonathon Gold called it the “first destination donut” with its main draw being their seasonal (thus fresh) strawberry donut. Other seasonal offerings include peach and pumpkin and it’s located in the middle of nowhere so it may be a pit stop on a road trip or a late-night destination when all you want is a long drive and some fried goodness. Open 24/7 and cash only.

All you need to know is two words: blueberry donuts. It may not sound like anything special but it’s a harmonious marriage of blueberries, dough, and glaze. Open from 6 a.m. to 2 a.m.

Their site claims their Double Decker O-Nuts were LA’s first incarnation of the cronut and they’ve developed quite a following thanks to it. Go for the Nutella strawberry twirl or the red velvet o-nut and lovers of ube can try the original ube donut with coconut and cream cheese or the ube bacon bits donut. They’re also known for the “Wow-Nut”, a waffle/donut hybrid, and we suggest the red velvet Oreo or the Reese’s Peanut Butter.  Open 24/7 and cash only.

If you’re looking for something beyond the glaze they’ve got the grapefruit Campari-filled donut and a salted caramel donut with vanilla ice cream and espresso for an Italian twist. Fun fact: the name is an acronym for the items they offer (Ice Cream, Donuts and Coffee). Closed on Mondays. Open Tuesday – Thursday from 11 a.m. to 10 p.m. and Fridays and Saturdays from 11 a.m. to 11 p.m.

It’s rare that a donut shop’s design be as famous as the donuts they carry but Randy’s is an L.A. icon whose 45-foot donut-shaped sign gets your attention and the real thing keeps it. The assortment here is all traditional, including cake, jelly and old fashioned varieties, as well as apple fritters and bear claws. Open 24/7. 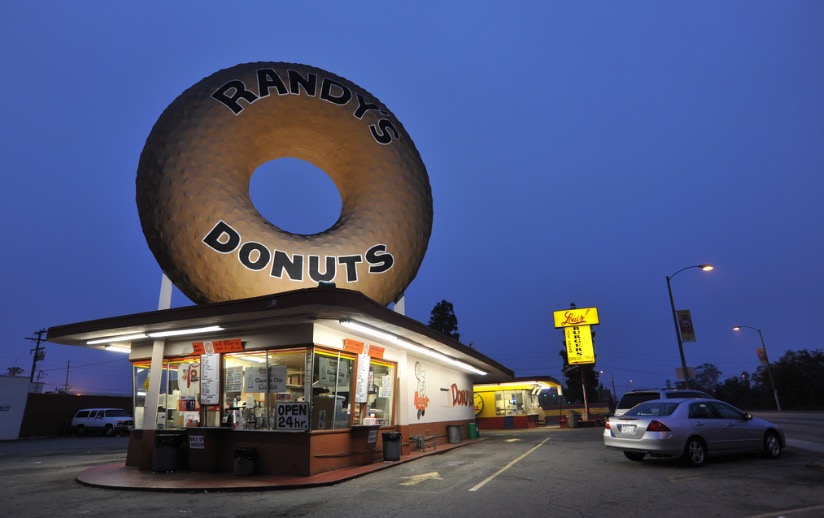 They’re primarily known for their French crullers which gives the donuts an airy, light texture. Get the orange or vanilla crullers, cinnamon glazed twist or the chocolate-filled powdered donut. Open 24/7 and cash only.

They’ve been lauded as one of LA’s best interpretations of the cronut because they took it a step further and stuffed it with Reese’s cups or Oreos. Your diet will take a hit but every bite makes it worth it. Open 4 a.m. to 11 p.m. everyday.

Like most Valley joints, it’s an unassuming shop in a strip mall but it’s home to the traditional donut options that everybody loves. They’ve also got “cresnuts” (cronuts) filled with strawberry, covered in powdered sugar, or drizzled with caramel and you can’t go wrong with any option or you can go with a bear claw or apple fritter which has a nice crunch to it and is filled with apple bits. Open 24/7 and cash only.

Pretty much all donuts are worthy of Instagram but some are practically made for it as is the case with these donuts that prove carefully places marshmallows, chocolate dots, and cookies can transform them into cute animals.  Open 24/7 and cash only.

Don’t see your favorite late-night donut shop on the list? Let us know in the comments below.