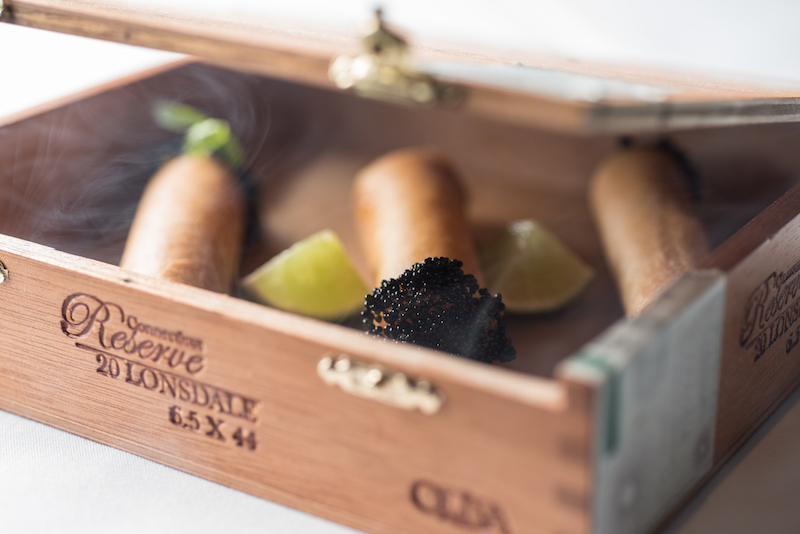 One of Beverly Hills’ most notable restaurants, Crustacean just reopened after an eight-month, $10 million remodel. A preview dinner for media this week offered a glimpse at what the public can expect from the new Crustacean.

The meal began off with tuna “cigars” — egg rolls filled with raw tuna and macadamia nut. With ash made of tubiko caviar, the cigars are beautifully served in a cigar box fragrant with instant smoke.

Other previewed items included a decadent roasted bone marrow with escargot imported from Burgundy; Crustacean’s version of Surf and Turf, pairing Wagyu carpaccio with wild salmon sashimi; braised lamb dumplings with galangal; and A5 Wagyu cooked on a pink Himalayan salt block. Also of note (and vegan as well), the heart of palm “crab cakes” and the karate salad made of kohlrabi, black truffle, crisped Kennebec potato, and garlic blossom. 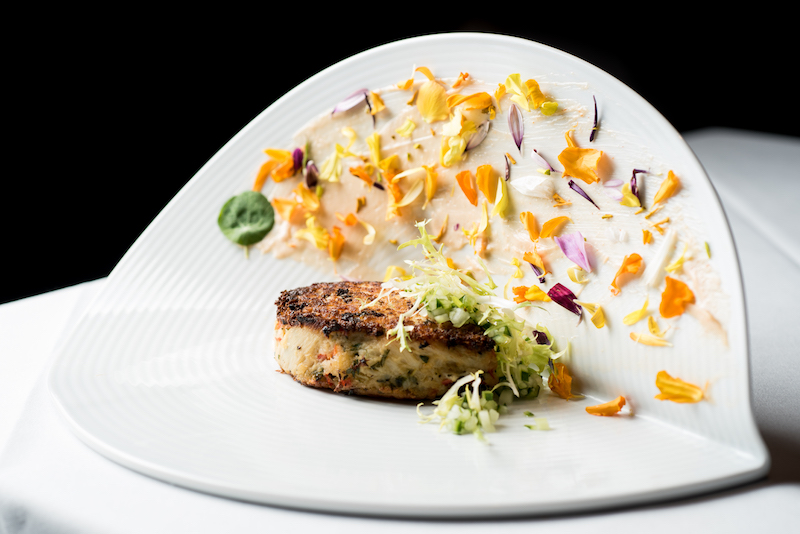 The decor, formerly featuring lots of red and reminiscent of French colonial Vietnam, has been majorly updated and now feels far more modern, light, and bright.

Crustacean’s hallmarks have long been the aquarium pathway built into the floor that’s home to a school of koi, and the famous garlic-roasted crab served with garlic noodles. The aquarium now wends its way even farther through the restaurant, while the crab and noodles are still a major draw — and deservedly so.

Crustacean’s owners, the An Family, fled Vietnam in 1975 for San Francisco. Though they weren’t chefs back in Vietnam — the family actually employed their own chefs in their homes — Crustacean’s matriarch, Helene An, learned to cook in a family-owned Italian restaurant in the Bay Area to help support the family. Eventually a star chef was born, leading to the Ans opening  their fusion-Vietnamese restaurant in Beverly Hills in 1997.

The Ans confided that the property will soon be home to a second restaurant, the private Da Lat Rose (named for a beautiful city in Vietnam known for its profusion of flowers) that will open upstairs in May.

Crustacean is open for lunch and dinner Monday through Friday, and on Saturdays and Sundays for dinner only. The restaurant is located at 468 N. Bedford Drive in Beverly Hills.