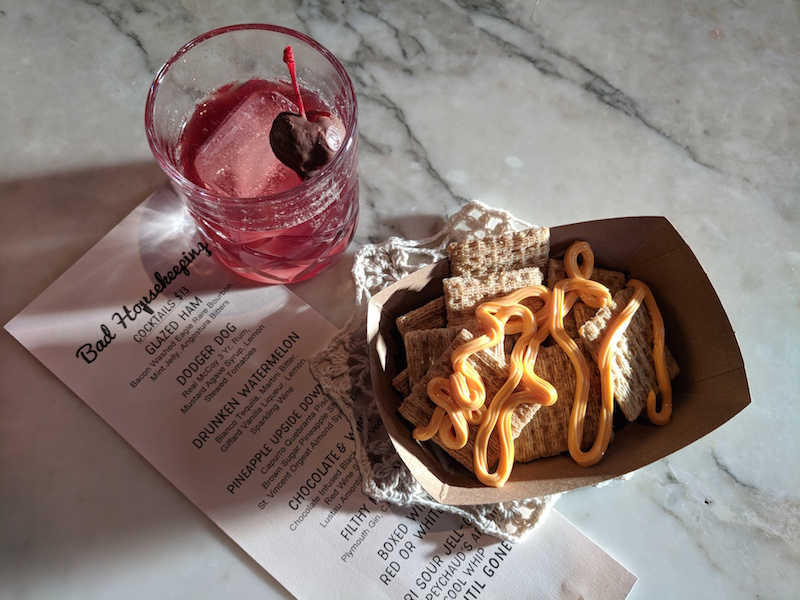 Good Housekeeping is that charming little cocktail bar tucked behind Cafe Birdie’s in Highland Park. But on Wednesdays through May 30, they’ll transform into an alter ego from the darkest timeline, serving up libations inspired by the mediocre recipes of dinner parties past. Yet don’t let the premise fool you: these clever cocktails are quite tasty.

Bad Housekeeping sort of reminds me of Bad Janet on The Good Place. Sure, she calls you names and isn’t as helpful as Good Janet, but she’s highly enjoyable. Bad Housekeeping redecorates by throwing afghans on Good Housekeeping’s navy banquets and dishes of hard candy on its tables, but Bar Director Alex Barbatsis and Head Bartender Lauren Pool still put the effort into making quality, if unusual, cocktails.

My favorite drink on the menu is the Pineapple Upside Down Cake. Now, if you’ve ever turned 21 and asked the bartender to make you a shot—”I don’t know, like, something fruity?”—you’ve likely come to know the overly sweet taste of the vanilla vodka/grenadine/pineapple juice shot by the same name. This less saccharine spin takes pisco and sweetens it with a house-made brown sugar pineapple shrub, almond syrup and lime. It’s highly drinkable if you like sweeter drinks, but it won’t make your teeth feel weird. It comes served upside down in a plastic container, with a cherry bobbing at the top. 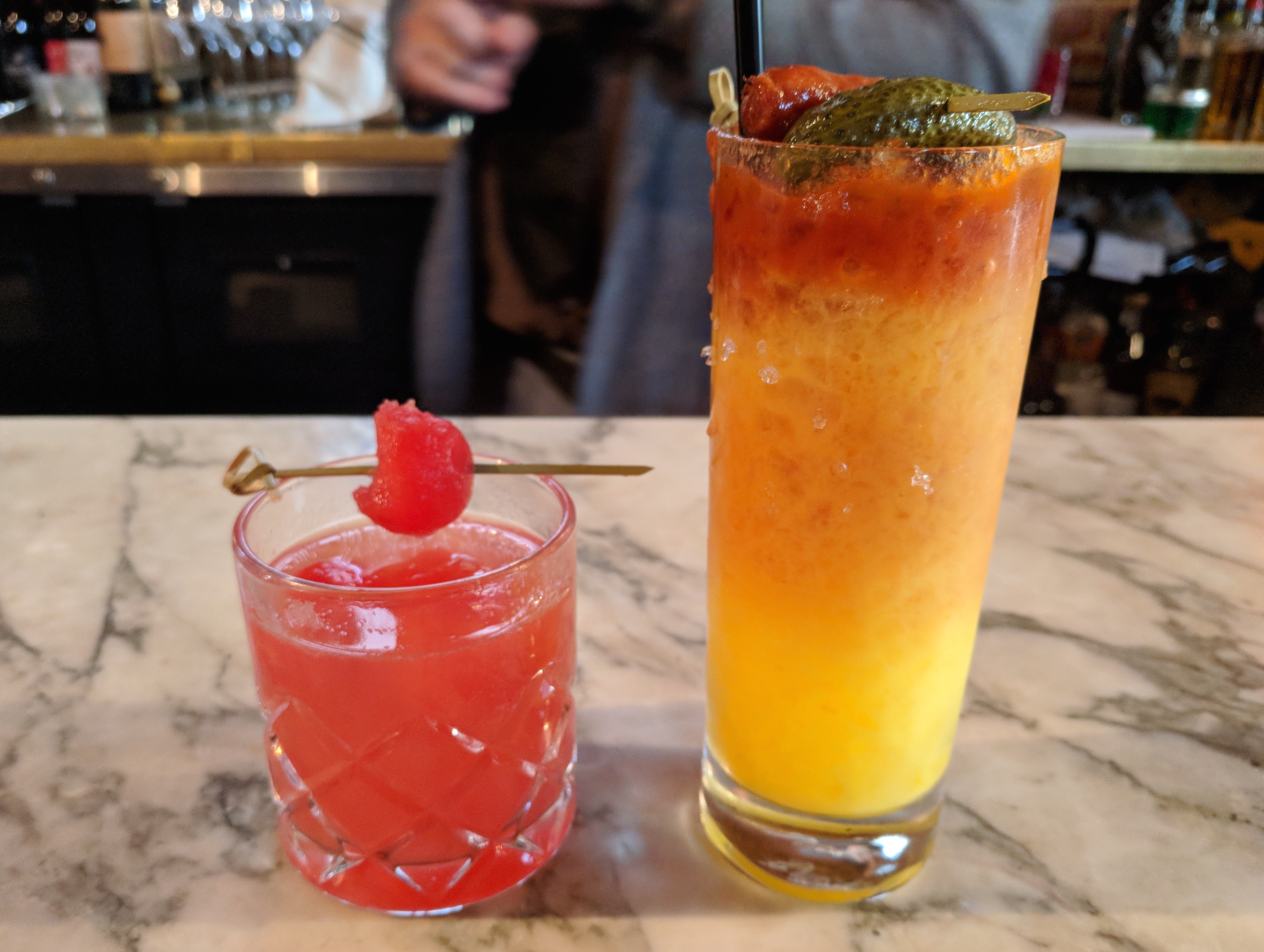 If you’re feeling adventurous there’s the Dodger Dog. Yes, my friends, Bad Housekeeping has made a hot dog-inspired drink. It comes layered in colors you might categorize as ‘wall paint options for my 1970s rec room,’ and garnished with a pickle and cocktail weenie. The drink itself is made with rum, mustard agave syrup, lemon, and stewed tomatoes. It tastes like a Bloody Mary someone added a large amount of slightly sweet mustard to. You’d probably only order one in a night, but it’s not bad!

Another meat-inspired cocktail is the Glazed Ham. It’s a strong one, made with bacon-washed Eagle Rare Bourbon, mint jelly, and Angostura Bitters. Equally strong is the Filthy Martini, made with gin and a salty caper berry brine, then shaken and served up. Silvers of ice are left in the cocktail, “so it looks like a frozen lake,” Barbatsis said. The play on poorly making a martini is both appreciated and reminds me of the kind of cocktail someone in Fargo might make me. Which I’d then proceed to have three of because, hey, those Dakota winters are pretty long.

The Drunken Watermelon is most refreshing, summery option. It’s made with tequila, sparking wine, vanilla liqueur and lemon. This drink absorbs the flavor of watermelon as it sits in a hollowed out rind. The actual fruit makes an appearance in the form of melon balls plopped into the cocktail.

Last but not least, the Chocolate and Wine cocktail is made with chocolate-infused Black Cow vodka, red wine syrup, and sherry, then garnished with a chocolate covered cordial. It’s basically the cocktail equivalent of those cherry cordials your aunt used to mail you around the holidays. 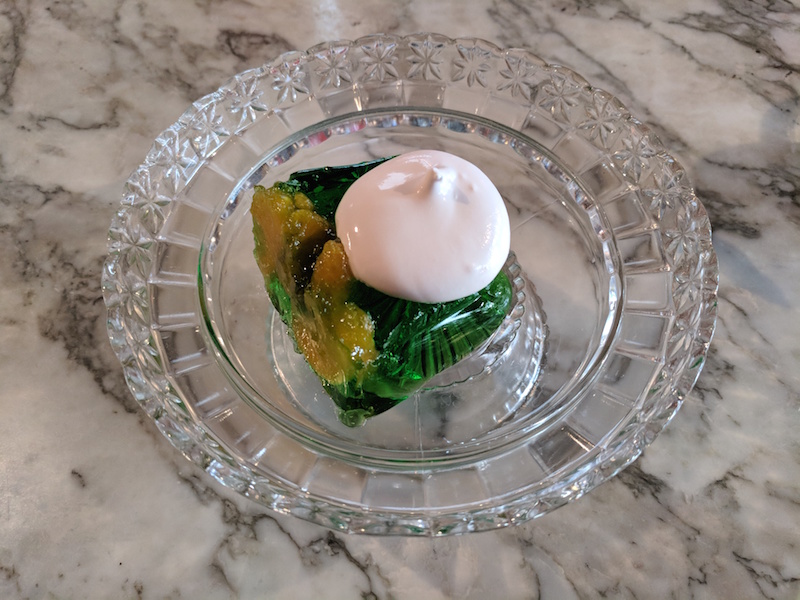 If your grandmother made Jell-O shots. Photo: Juliet Bennett Rylah

All of these cocktails are $13. Guests can also get a glass of red or white boxed wine for $6, or a slice of a Midori Sour Jell-O mold with mandarin oranges, lovingly topped with a Peychaud’s Aperitif whipped cream ($7).

Drinks also come served with a variety of nostalgic snacks. For instance, we were offered Triscuit with a mess of Cheez Whiz, served on a doily someone once crocheted lovingly by hand.