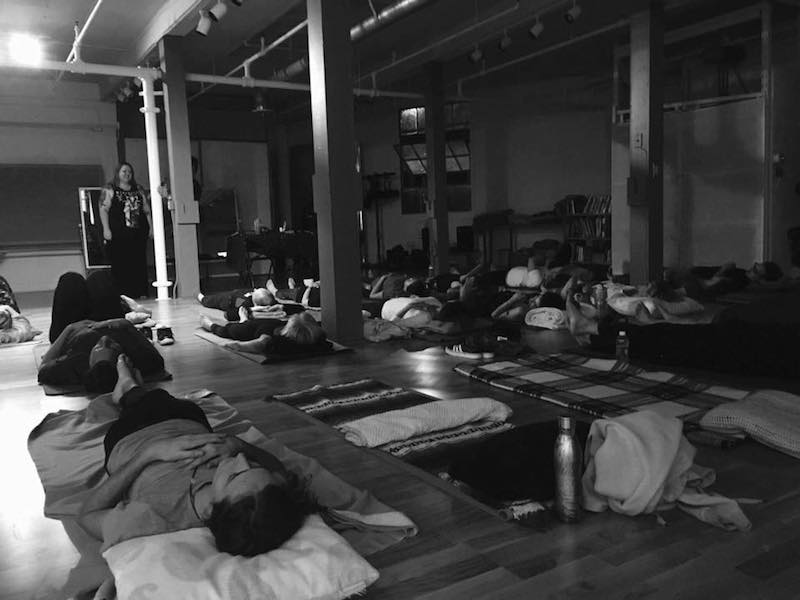 Do you enjoy self-care, but bristle at the idea of “love and light?” Are you more likely to meditate to Throbbing Gristle than Enya? Well, fellow spooky friends, there’s finally a sound bath for you! Lauren Davis and Adam Thompson have been putting on their Dark Ambient Sound Bath sporadically for the past two years, flipping back and forth between Los Angeles and the Bay Area.

As a genre, dark ambient typically refers to eerie, droning, but not entirely unpleasant music—sort of like if you were at a spa, but the spa was dark and kind of scary.

You can listen to examples via SoundCloud, but Thompson, who acts as the event’s musical director and sound designer, says those tracks are much shorter than the full, 90-minute pieces created live during the sound bath. These longer pieces are sometimes composed in advanced, and other times improvised by a small group of musicians using both acoustic and electronic instruments throughout the course of the evening. You might see the same instruments as other sound baths—crystal bowls, chimes, and gongs—but the soundscape takes on a darker vibe.

In addition to Thompson’s soundtrack, Davis leads meditation and breathing exercises, as well as “shadow work,” or what Davis called the “darker end of healing.”

“Shadow work can be very useful and helpful to aide in healing and I think it often is overlooked and sometimes even feared by most in healing communities,” Davis said.

What exactly is shadow work? Famed Swiss psychotherapist Carl Jung referred to the “shadow” as the unknown, darker side of our personality—the things that we push away. Jung wrote, “The shadow personifies everything that the subject refuses to acknowledge about himself and yet is always thrusting itself upon him directly or indirectly—for instance, inferior traits of character and other incompatible tendencies.” However, Jung did not believe the key was to keep ignoring the shadow, but to face it. In his own words: “One does not become enlightened by imagining figures of light, but by making the darkness conscious.”

“I believe it is key for full range healing for people who are trying to face some real trauma and have issues that require a deeper level of healing,” Davis said. “I believe when we work with these shadows, we are nourishing a side of ourselves that we don’t often tap into. Lots of healing communities have a tendency to focus on love and light as a means of healing and while that is helpful and useful to some people, we are finding a large number of people who need to connect on a deeper level to explore and express their shadow self, face their demons, and overcome trauma.”

Fittingly, the title their next sound bath is “exorcism.” Yet don’t expect a visit from your inner Pazuzu; Davis instead thinks of demons as the negative qualities one has inside.

“I guide in personifying that demon and facing it without fear,” Davis said. “We use primal screaming to shatter and release it from us. It’s very powerful and often leaves people trembling.”

Primal screaming has its roots in another psychotherapist, Arthur Janov, who felt that patients with repressed trauma could work through it by screaming. There are few opportunities to have a good scream in Los Angeles, making Dark Ambient Sound Bath one of the few places you can go to let it all out.

If you’d like to get in touch with your dark side, the next Dark Ambient Sound Bath is Sunday, March 25 at 8 p.m. at the Pieter Performance Space in Lincoln Heights. The sound bath is about 90 minutes long. Guests are advised to wear comfortable clothing and bring along a yoga mat, blanket, and/or pillow. Water is recommended, since you’ll be screaming, and tea will be provided. Tickets are $25 and are available online.