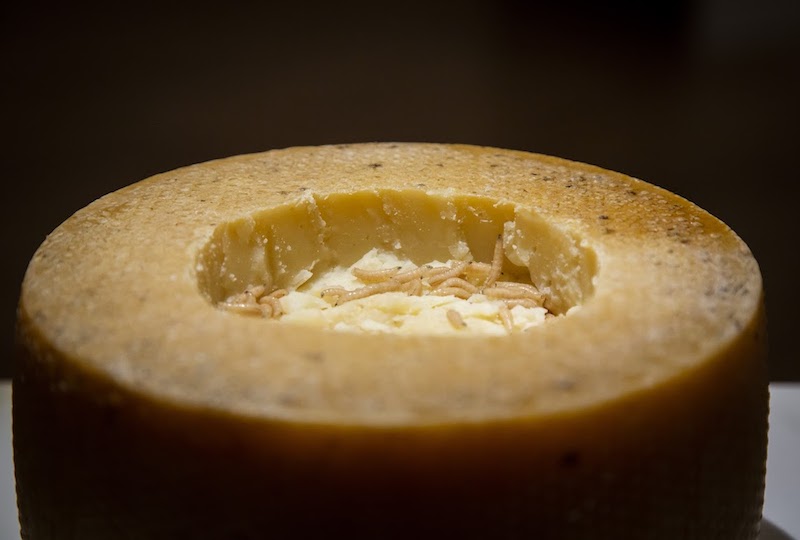 The average American would be revolted by pickled sheep eyes or black licorice caked with salt, but The Disgusting Food Museum is here to showcase that one person’s nightmare is another’s delicacy. Presented alongside fruit bat soup and musk-flavored candy, visitors will find a can of root beer that, for many, harkens back to the halcyon days of summer vacation—and for others, tastes like toothpaste.

The Museum of Disgusting Food first debuted in Malmo, Sweden in the fall of 2018, and has now come to the A+D Museum in downtown Los Angeles. It’s curated by Dr. Samuel West—who also curated The Museum of Failure, which came to the A+D Museum in last year—and Andreas Ahrens, who serves as the director of the Swedish museum. The Disgusting Food Museum features some 80 food items from around the world to suggest we reexamine “disgust” as well as consider alternative sustainable protein sources like insects and lab-grown meat. Exhibits fall into a variety of “disgust” categories, which may include their taste, appearance, smell, texture, or the manner in which they are prepared.

“What I want to happen and what’s actually been the response so far is that people say they came [to the museum] for the shock value, and they left with a better understanding that food preferences are cultural, period,” West said. “Disgust is culturally conditioned. You see both foods that you like right next to ones you find utterly ‘disgusting,’ and they’re on the same table with the same respect. I think the contrast between the different cuisines and cultures is as interesting as the subtle similarities that people don’t really pick up on until they’ve immersed themselves into it. What’s the real difference between eating a guinea pig and a regular pig?”

Both animals are featured in the museum’s collection, which calls into question the antibiotics pigs are injected with prior to their slaughter and consumption. Guinea pigs, also known as cuy, are often eaten in parts of South America. 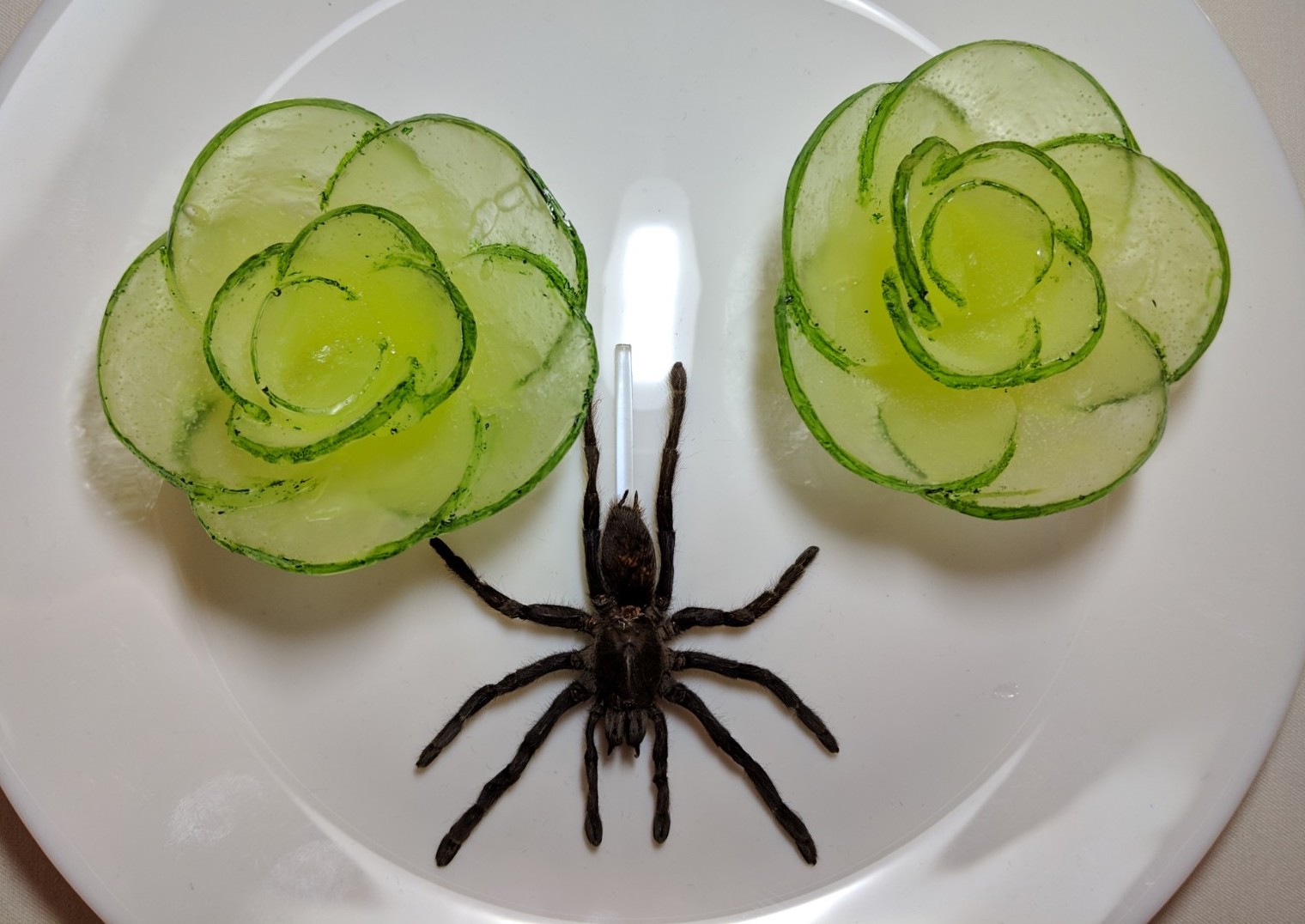 Elsewhere you’ll find displays of insects and animals—or animal parts—not typically consumed in the U.S. The Mongolia Mary is just like your standard Bloody Mary, save the whole, pickled sheep eye, while a Peruvian health smoothie is made by blending honey, vegetables, and endangered Titicaca water frogs. (It should be noted that most of the animal displays in the museum are either taxidermied or toy figures.)

Some of these meat dishes are included in the museum because their preparation methods are considered cruel. Dishes like Foie Gras and ortolans may be considered rich delicacies by some, but are often boycotted or banned due to the treatment the animal must endure. Ortolans, small songbirds, were traditionally eaten with a napkin over the diner’s head, both to keep in the aroma and, supposedly, to hide the shame of eating one. French menus have been banned from offering the birds since 1999, not that it stops some from trying to acquire them. In the NBC series Hannibal,  gourmand (and cannibal) Hannibal Lecter explains how ortolans are prepared to FBI Agent Will Graham, right before they eat them in the clip below:

A few of the dishes at the museum contain fluids one might consider surprising. There’s the English’s blood pudding; Sok Z Kiszonej Kapusty, a Polish sauerkraut juice; Kumis, or fermented horse milk, from Russia; Garum, an ancient Roman sauce made by fermenting barrels of fish guts in the sun; and Three Penis Liquor, a rice wine breweries with seal, deer, and dog penises that is said to increase virility. Shirako, a Japanese dish that translates to “white children” and consists of fish sacs, typically full of cod sperm. It’s said to have a creamy, slightly fishy, milky taste.

Perhaps the oddest among them—at least for the audience most likely to stop by the Los Angeles museum—are “Virgin Boy Eggs,” which hail from Dongyang. According to the Reuters, the traditional dish calls for eggs to be boiled, then simmered for a day in the urine of boys, preferably no older than 10, which is often collected at primary schools. Vendors sell them for a quarter and they are so popular, they have been deemed an “intangible cultural heritage” by the local government. 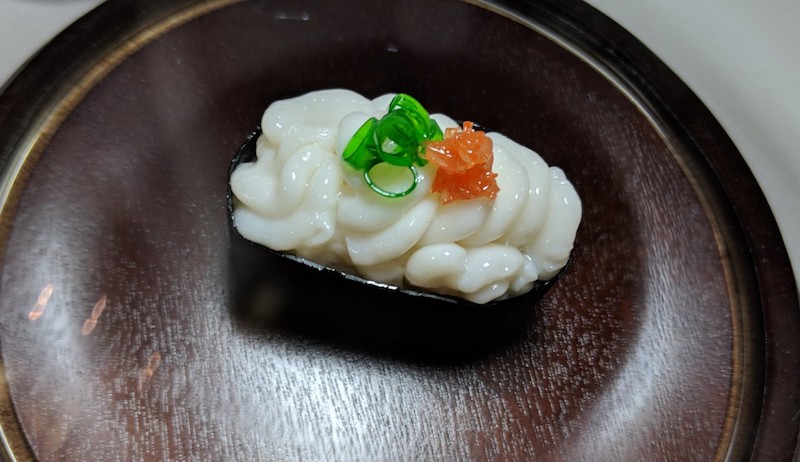 Shirako, or milt, is made with fish sperm. Photo: Juliet Bennett Rylah

It’s in the smell section where one finds The Altar of Stinky Cheese. Dare to open the jars next to the visual displays and you’ll understand why each has been chosen. The smelliest among them is Vieux Boulogne, an unpasteurized cheese from Boulogne-sur-Mer made from the milk of cows that have grazed on sea-sprayed grass. The cheese is then matured for around two months, then washed in beer. A panel conducted by Stephen White of Cranfield University determined that Vieux Boulogne was the stinkiest cheese in the world. According to the Independent, it has hints of “wet earth, mushroom, and of rotting leaves,” or, for the less sophisticated, cow poop. (I smelled this and can confirm.) It shares its altar with Gamle Ole, a well-aged Danish cheese, and the Stinking Bishop, a U.K. cheese that surged in popularity after a character in Wallace & Gromit: The Curse of the Were-Rabbit uses the semi-soft cheese’s scent to rouse Wallace from the dead.

Then there’s the Sardinian cheese, Casu Marzu, in which a whole rind of pecorino cheese is sliced open and set outside so that flies can lay their eggs in it. The museum’s display allows one to watch live maggots squirm in the center of the cheese. The cheese is illegal in the EU, largely because surviving maggots, if not removed, can cause a whole host of issues in a diner’s bowels. This is not the only dish within the museum’s purview that is potentially dangerous. Live octopus is considered a delicacy in South Korea, but still-moving suction cups can stick to a diner’s throat and kill them. According to the museum, about six people each year die this way.

Other items are less deadly, but might make you laugh because you’ve never considered them disgusting. Ahrens noted some Australians were peeved to see vegemite, a popular sandwich spread, in the exhibit. Americans might be surprised see Pop-Tarts and Twinkies in the mix. 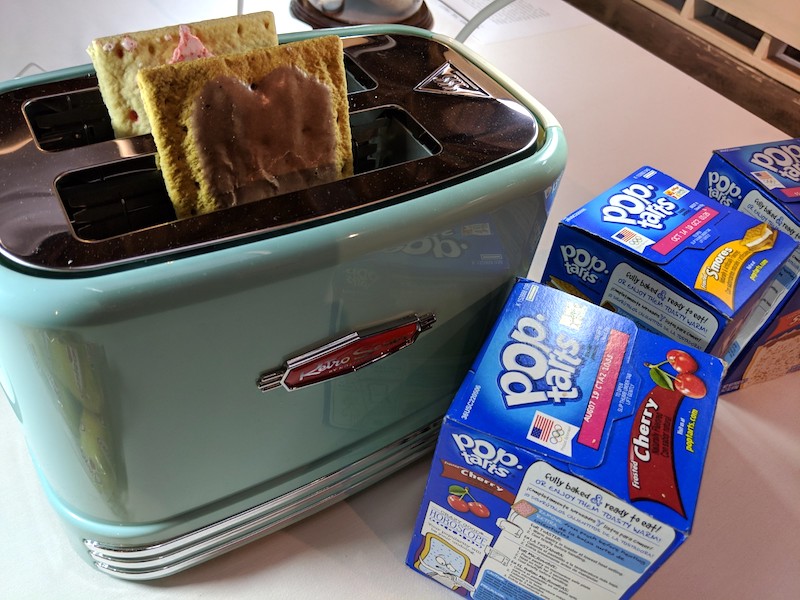 Many Americans are surprised to see this popular ‘breakfast pastry’ in the exhibit, but West says Europeans detest them. Photo: Juliet Bennett Rylah

Which is one of the key points of the museum: disgust is on the tongue of the beholder. I tried and abhorred the salt licorice. But while I grew up eating the occasional S’mores Pop-Tart before school or sipping on a root beer, Ahrens spent his youth popping salt licorice. We each find the other’s childhood favorites, to quote Ahrens, “absolutely vile.” Meanwhile, West, who grew up in both California and Sweden, loves root beer and says his children love salt licorice.

“Disgust is one of the universal emotions. It’s there to protect us from dangerous food, poisonous food, rotten food,” Ahrens said. “So, we get this initial reaction of ‘I shouldn’t eat this’ to protect our health, then we learn through our upbringing that some of the things that we should find disgusting are not. So, for me, salt licorice, when you first taste it, it kind of stings your tongue. But when you are used to it, you crave that feeling.”

Both West and Ahrens, for instance, have learned to enjoy the smell of durian—a spiky, Southeast Asian fruit with a pungent odor that contradicts its sweet, custardy taste—after sampling the fruit so many times. And how many of us have gone from shunning vegetables in our youth to craving them in our adulthood? 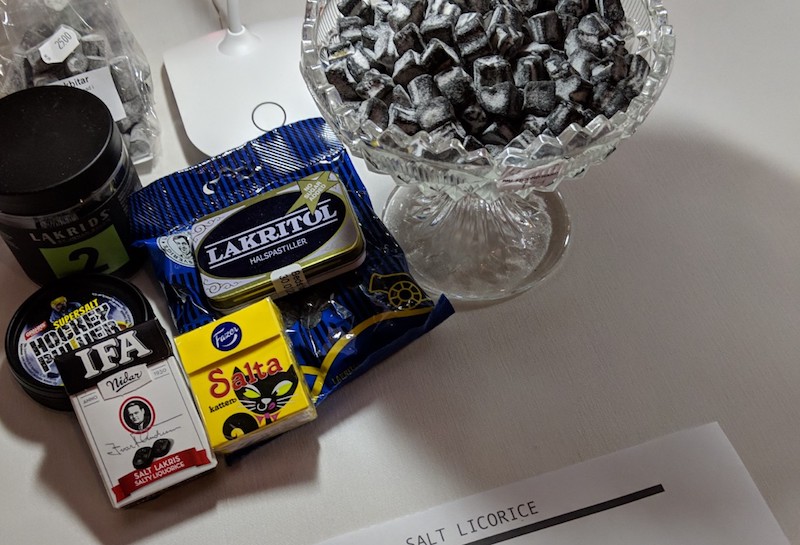 “My hope is that if we stop judging the food of other cultures as disgusting, maybe we will be more tolerant towards cultural behaviors that we might not be used to and realize that we think they are strange because we are not used to them, not because they are actually strange,” Ahrens said.

If you’re interested in evolving your own palate, The Museum of Disgusting Food is offering tastings of a variety of items, including stinky cheeses, a handful of insect dishes (which West promotes as the key to eating less meat and a sustainable future), century eggs, global candies, and, for the very brave, Hákarl. Hákharl is an Icelandic dish of aged, fermented shark. Of all his culinary adventures, Anthony Bourdain once described the dish as “the single worst, most disgusting and terrible tasting thing” he’d ever tried. I tried it myself and my first thought was, “This is what drinking embalming fluid must be like.” This thought was likely due to the dish’s ammonia smell, which lingers in the nose after consumption. To be fair to the shark, ammonia is not formaldehyde, but I will not be eating Hákarl ever again.