The Forest Lawn Museum in Glendale is Another of L.A.’s Totally Unexpected (and Free!) Gems

A cool little museum tucked away on the grounds of a… cemetery? It doesn’t seem like it would be a good fit but the Forest Lawn Museum in Glendale pulls it off nicely. Like other gems in L.A. such as the Sunken City in San Pedro or the Chandelier Tree in Silver Lake, often times it’s the unexpected finds that intrigue us the most.

The truth is I hadn’t known about this little museum until I stumbled across a post on the Los Angeles subreddit over the weekend, but boy am I glad I did!

User gen_reynolds was kind enough to bring the museum to the attention of the community, summing up the offerings thusly:

“There is a museum at the top of the cemetery that has revolving exhibits. Right now they have one on Motorcycles. Also they have beautiful stained glass on exhibit, some from the 13th century. Next to the museum is the Hall of The Crucifixion and Resurrection, which holds one of the largest paintings in the world on permanent display. There are also hundreds of statues throughout the gardens, including a reproduction of Michelangelo’s David.”

Oh, and the best part is that it’s completely free (as is the parking!). Although I haven’t had the occasion to check it out yet, I look forward to heading over there with Christina fairly soon. From the additional research I did on Yelp, it doesn’t seem like the exhibits are terribly big, as some people are running through it in just 10 minutes or so. But it’s a great excuse to go grab some lunch in Glendale and hey, you can’t argue with that price! 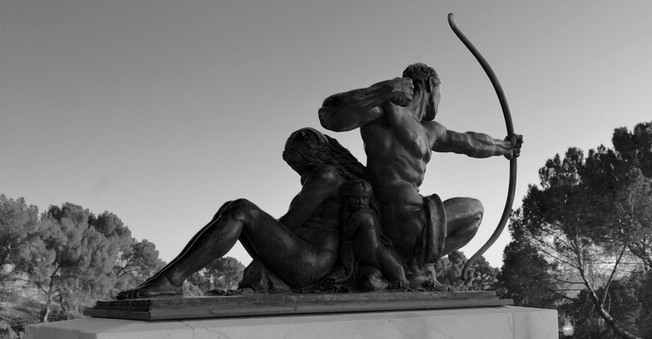 If you want to check out the full thread of comments related to the museum to see what folks are saying, here’s a link to the Reddit post.

Also, to help you visualize the scenery I’ve embedded a video with an overview of the cemetery grounds.

And lastly if you want to see how to get their, here’s an address, a link to the cemetery website and a map embed of the location. Happy exploring!