Filmmaker George Lucas and L.A. Mayor Eric Garcetti were among those present at this morning’s groundbreaking of The Lucas Film of Narrative Arts in Exposition Park.

The Star Wars creator is paying for the construction of the five-story museum, as well as donating a large collection of art and pop culture relics. Though it’s not clear how much exactly he’s donating in costs, construction has been estimated at $1 billion, the New York Times reports. Completion is estimated for 2021.

The space will be designed by Ma Yansong, founding principal of MAD Architects, while Mia Lehrer+ Associates will design the museum’s 11 surrounding acres of green space. Additionally, the museum’s roof will contain yet another two acres of green space. Renderings reveal a futuristic, white building that looks not unlike a spaceship, and interiors featuring high ceilings and transparent elevators. The museum itself will contain gallery, lecture, and office space; a library; classrooms; a theater; and a cafe and restaurant. Don Bacigalupi, Lucas Museum board president, told the Los Angeles Times that the museum would be “an icon of 21st century design.” 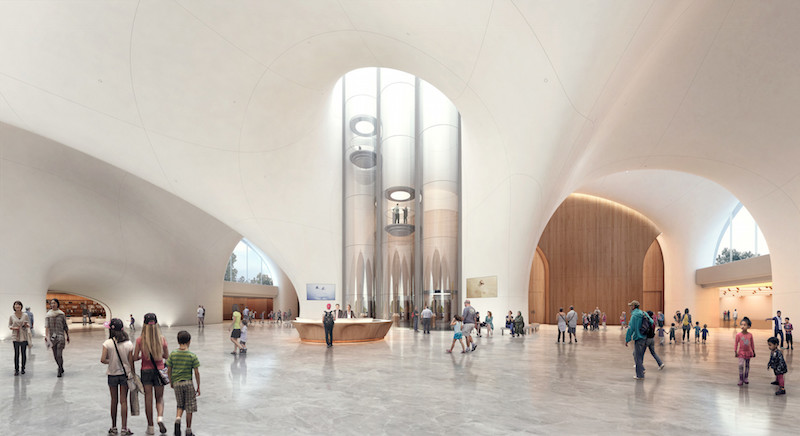 Los Angeles approved the museum after Lucas ran into friction in Chicago and San Francisco. Lucas told Los Angeles City Council, “The popular arts—the popular narrative arts which tell the story of society—have kind of been dismissed, so that’s one of the things that spurred me on to say this kind of art is very important, and it is especially important to adolescents.”

This morning, Councilmember Curren Price also emphasized the museum’s impact on the youth, pointing out that in his District 9, where the museum is located, a third of the population is under the age of 18. Perhaps, he quipped, the next George Lucas is among the museum’s future visitors.