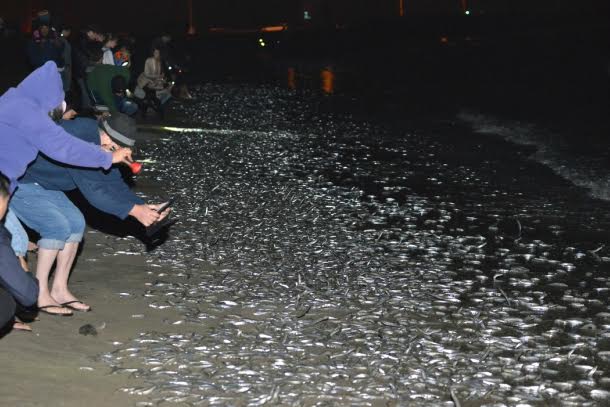 It’s an activity poet Charles Bukowski once suggested was only enjoyed by “unemployed drunks with flopping canvas hats and no women at all.” Every year, from March to September, the grunions come to shore to mate in droves, covering California beaches as the small, silver fish fertilize and lay their eggs. The public knows the spectacle as “grunion runs,” which are open for observation and occasionally catching the fish. It’s the catching Bukowski derisively referred to in his poem, “The Hunt.”

Grunions are an interesting fish, and they can be somewhat elusive. They only live off the coast of California and Baja California, Mexico. Their mating rituals only take place at night, often after 10 p.m., and only for four days in a row beginning on the same nights as the new and full moons. The female grunions will come ashore at high tide, digging into the sand with their tails. The male grunions will then wrap around the female fish to fertilize the eggs, which will be buried in the sand. In ten days’ time, the baby grunions will hatch and are swept into the ocean. A single female grunion may spawn up to six times, accounting for some 18,000 eggs, in a single season. The California Department of Wildlife estimates thousands of grunions may show up to a given beach at a time, but even though the grunion patterns are predictable, there’s still no guarantee you’ll actually see a grunion run on any given evening.

You can hit the beach to observe the grunions at any time, but there are strict rules about trying to catch them. For instance, grunion catching is never allowed in April or May. All grunion hunters over the age of 16 must possess a valid state recreational fishing license, while those 16 and younger are allowed to handle the grunions gently, but must release them back into the ocean. Hunters can only use their hands to catch the grunions, and may not dig holes in the sand in an attempt to entrap the fish. Hunters should only take as many grunion as they feel they can use. The Department does not recommend any particular beach for observing or hunting, but does specify a gently sloping, sandy beach is best.

You could also attend a ‘Meet the Grunion’ event at Cabrillo Marine Aquarium on select dates through grunion mating season. Doors open at 8 p.m., followed by an educational film in the auditorium at 9 p.m. Then, you’ll head out to the beach in search of the elusive fish. Or if you’re just really into grunions, you can attend the Grunion Fish-tival on May 17, complete with arts and crafts, video presentations, games, and prizes awarded to the best aluminum foil grunion hat. Admission to both is $5 for adults, and $1 for students, seniors, and children (no refunds if the grunions don’t show).