Looking to get in the Halloween spirit this month?

There are loads of experiences to take part in and around L.A. for lovers of Halloween and all things spooky, whether we’re talking theme park attractions, immersive adventures, haunted houses, tours, festivals, mazes, or pretty much anything else you can think of that’ll creep you out in the funnest way possible.

And if you’re just looking for an excuse to dress up in your favorite costume, well we can provide that too.

The 2015 edition of Universal Studios’s seasonal celebration of all things scary will include a smorgasbord of scary experiences and attractions, including 6 terror mazes (Walking Dead, Insidios, Halloween, This is the End, Crimson Peak, and Alien vs. Predator), a Terror Tram where you’ll have to survive “The Purge”, 4 unique scares zones, plus a live music show and access to Universal Studio rides such as Transformers 3-D, Revenge of The Mummy, and Jurassic Park in the Dark.

2. Dark Harbor at the Queen Mary

Queen Mary’s annual Halloween event featuring mazes, monsters and more, is back for 2015 with six mazes that will take you through never-before-visited areas of the haunted Queen Mary.

The hayride posits itself as a “a high scare, high startle content experience” which basically means that you and a bunch of strangers get carted around Griffith Park in and old wagon while costumed characters, demons, witches, devils, and pretty much everything else you can imagine slink out of the shadows and terrify you (and you try not to pee your pants). 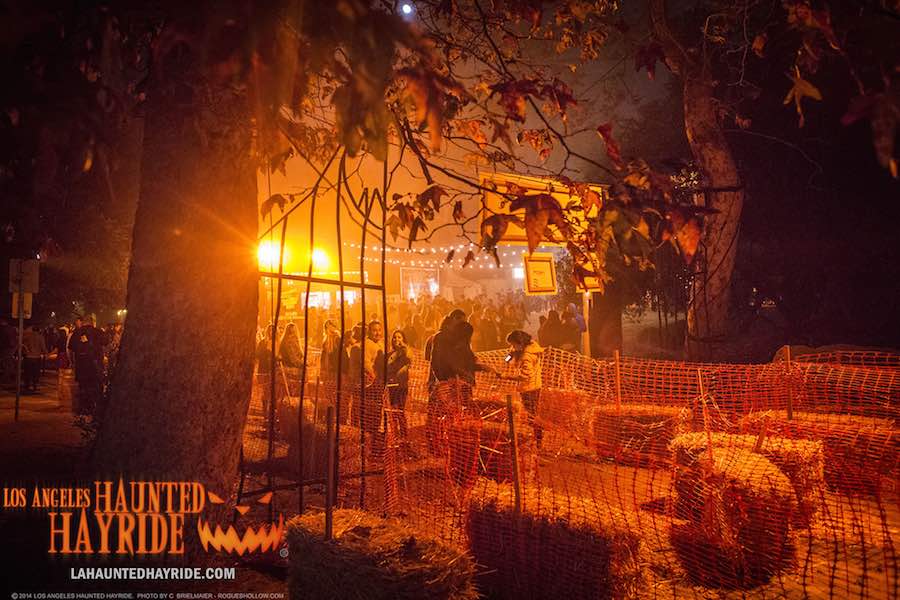 Scott Michaels’ Dearly Departed Tour series is one of the most knowledgable and enjoyable experiences you’ll find in L.A. if you’re looking to learn more about the dark side of Hollywood History. Christina and I did the tour last month and, frankly, we loved it! In addition to their regularly schedule weekly bus tours, they also offer an array of speciality tours, including their G-G-G Ghost Tour where a costumed undertaker will guide you along the Walk of Fame recounting tragic tales, stopping at historic crime scenes and haunted landmarks.  The walking tour covers about 1 mile lasts around 90 minutes. Extended tour dates are offered throughout October and November.

Want to learn about downtown L.A.’s dark side? The folks at Downtown LA Walking Tours have a special Haunted Tales walk to inform you on the most disturbing, spooky, and otherwise strange history stories from DTLA’s past. Takes about 2 hours, and costs $15.

Tapia Brothers Farm in Encino puts on one insane corn maze complete with a map and trivia questions! Make your way through the maze searching for the answers, to be submitted into a drawing for a chance to win $100 cash. The pumpkin patch also offers a farmers’ market, kid friendly attractions, like bounce houses, hay wagon ride, tractor-pulled train and pony rides (weekend-only). The farm is located at 5251 Hayvenhurst Ave Encino, CA 91316. 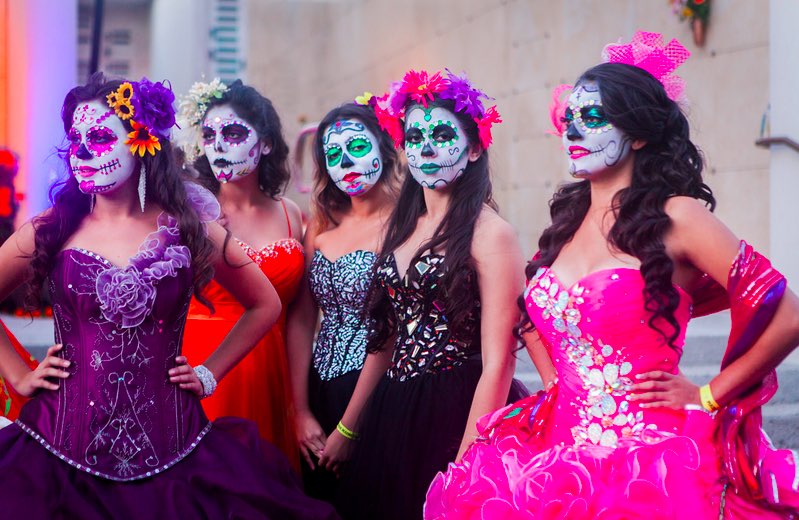 Day of the Dead at Hollywood Forever Cemetery. Credit: Mooshuu via flickr

On Halloween Night the 3rd annual Santa Monica Zombie Crawl returns to the westside a for spooky, costumed pub crawl filled with tons of food and drink specials at spots like Big Dean’s, Ye Olde King’s Head, Barney’s, and more!

14. ‘Nightmare Before Christmas’ at the Hollywood Bowl

Grab some friends, get yourself dressed up in your most Tim Burton-y costume, and head on over to the Hollywood Bowl where Danny Elfman, along a supporting cast of singers and full orchestral backing, will perform songs from The Nightmare Before Christmas during a special Halloween night screening of the (wow this makes me feel old) classic Disney film.

What are you doing to get in the Halloween spirit this year? Let us know in the comments below!