7 Haunted Places in L.A. Where You Can (Allegedly) Dine With the Dead

The following is a guest post from James T. Bartlett, author of Gourmet Ghosts – Los Angeles, a guide to the haunted bars and restaurants of L.A.

Halloween is flying at us faster than a vampire bat, but since staring through the windows at somewhere infamous isn’t bloody enough and tour buses are well, tour buses, where can you go if you want to dine with the devil, or sip a spirit in spooky company?

As I explore in my book, Gourmet Ghosts, Los Angeles has literally dozens of bars, hotels and restaurants with a secret (and some not-so-secret) haunted past, but I wanted to present a few choice cuts to the readers here at We Like L.A.

To that end, I’ve listed seven of my favorite haunted food spots below, in no particular order, numbered only for reference.

Enjoy the food… and the spirits.

Part museum, part library and home to several performance theatres (and five bars), this fun-loving club hideaway in the Hills is home to “ghost” Invisible Irma, who happily plays her piano for tips.

Dreamt up and built with his own sweat and tears by “Magic” Milt Larsen, the castle is a haven of theaters, chandeliers, sliding bookcases, mystery staircases and corridors – and there’s also a séance room dedicated to Harry Houdini. The mustachioed Milt is there most nights, so grab a Corpse Reviver #2 (Lillet Blanc, gin, Cointreau, lemon juice and a splash of Galliano) and ask him for a story.

According to Milt, Irma befriended original building owners the Lane family and they allowed her to play on their piano. She loved it so much, she came back after she died – and so now she performs every night, at Friday lunch time and at Sunday brunch.

There has been real tragedy here though; a magician died backstage before he was due to go on, and Milt says that when guests describe the man working at the English Hat & Hare pub there, he knows they’re talking about bartender Loren Tate – who died many years ago. 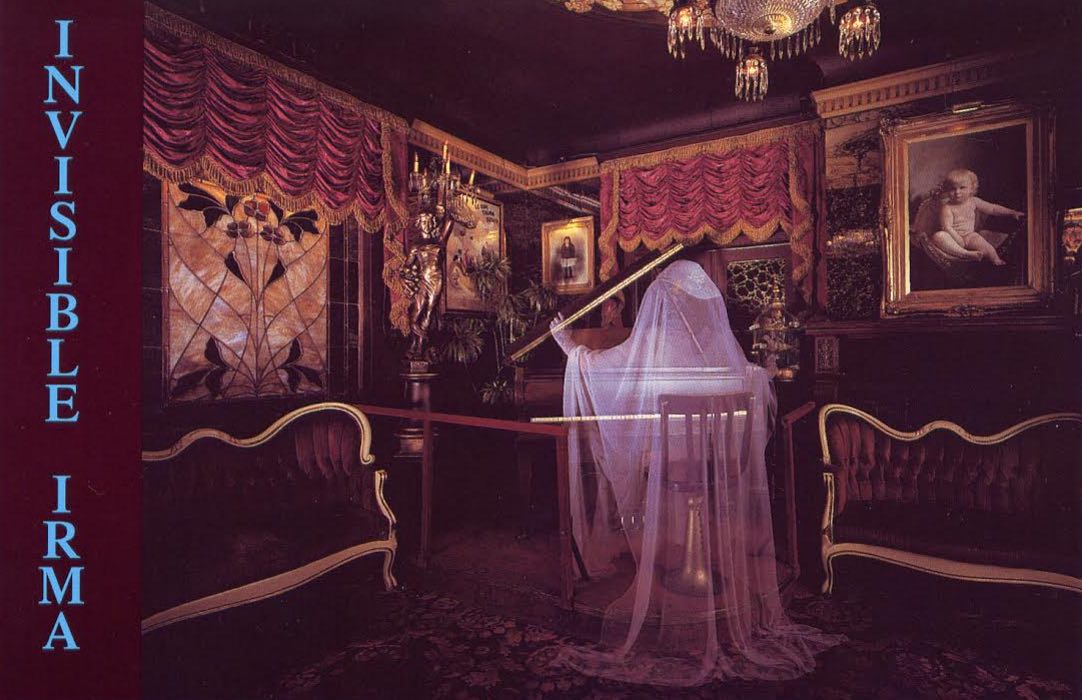 An art deco-style celeb favorite (the walls are lined with signed photos and Lucille Ball often talked about going for a drink here in the “I Love Lucy” shows), it was also a regular joint for the infamous murder victim Elizabeth Short (better known as The Black Dahlia), corrupt cops, dodgy politicians, and many others.

On Christmas Eve 1997 co-owners Kurt Richter died while actually drinking at the bar, and current owner Tricia LaBelle is sure someone else is in residence too: “a little guy named Al” who tended bar and got taken in by a sympathetic Steve Boardner, the original owner and namesake of the bar.

Al lived here until he died a few years ago, but LaBelle regularly hears his footsteps around the office, and is sure that “ghosts love to party.” 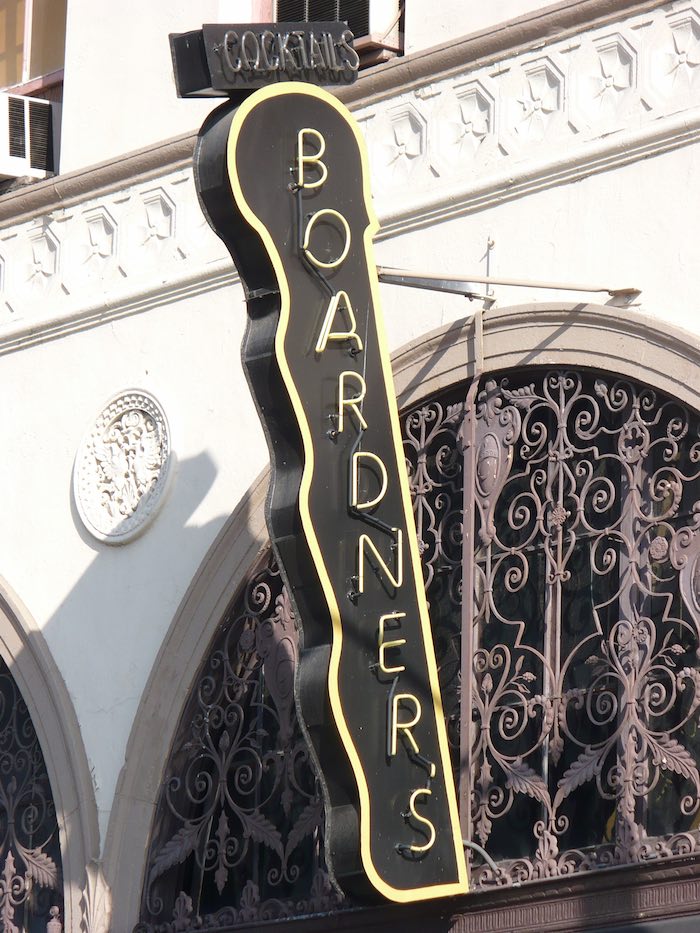 Still a celebrity fave, this 96 year-old restaurant is strictly paparazzi-free – so be discreet when you check out the booths to see who is there! Their Thursday chicken pot pie is legendary, and back in the day this place used to be a writer’s haunt for people like Hemingway, Fitzgerald, Bukowski, Chandler, Faulkner and Vidal too.

Charlie Chaplin had his preferred booth (number 1 in the Old Room – try and grab it), but no one cared about that when a staff member saw la mujer sin cabeza (an apparition or ghost of a woman without a head) one night.

There’s no word on whether the headless lady paid further visits, but most of the long-serving red waist coated staff probably wouldn’t blink an eye even if she did – they’ve seen it all here (and then some). 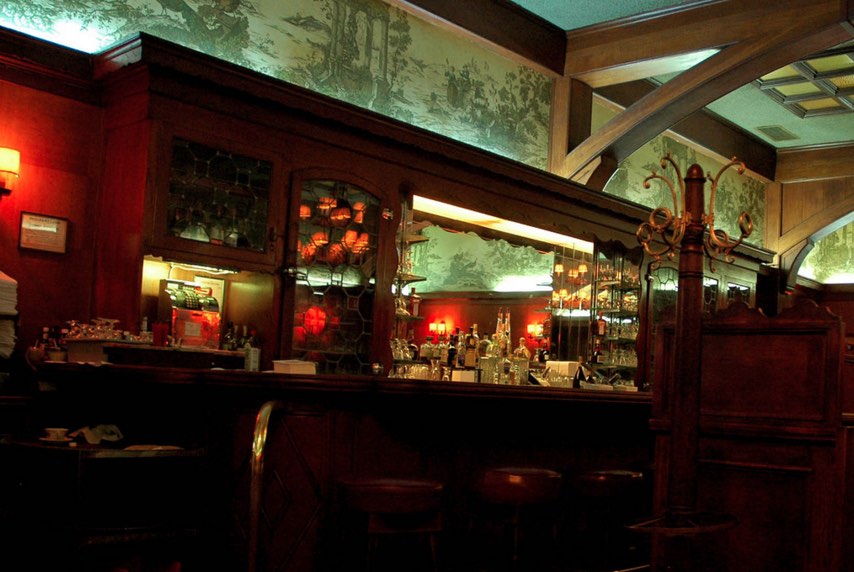 The Bar at Musso & Frank. Credit: meltwater via flickr

One of the original luxury hotels in L.A., the Biltmore is a world of chandeliers, staircases and afternoon tea. Some of the early Oscar ceremonies were held her, but perhaps most famously it stood in for the “Hotel Sedgewick” in 1984’s Ghostbusters – Ray, Egon and Peter caught “Slimer” in what’s now the lobby.

Ghost stories abound here, but most famously it was the last place Elizabeth Short was seen alive. The opulent Gallery Bar offers the “Black Dahlia” cocktail in her honor (vodka, Chambord black raspberry liqueur, Kahlua), so take a sip and look around for a pick-me-up: the “Biltmore Angel” design is everywhere. 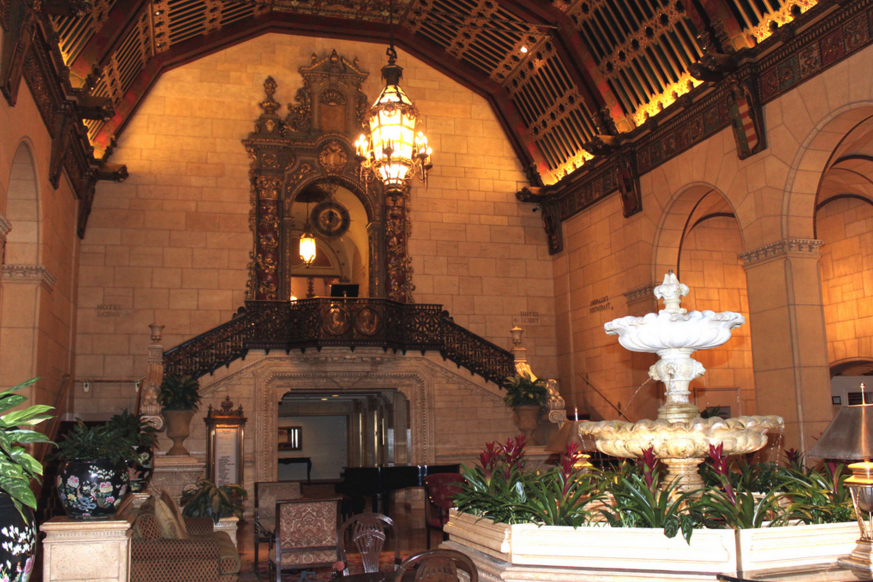 An Old School classic recently redone to modern tastes, this red beacon on Santa Monica is fashioned in part from an old trolley car. Inside it still has many of the signed photos of past star customers (Sinatra, Bogart, Gable and more), and it has been featured in movies like L.A. Confidential and The Majestic.

Mobster Mickey Cohen ran a betting scam out of here (try to find his safe) and though co-owner Lem Quon died in 1993, he’s still around – especially if you choose to sit in his favorite booth, number 8. If you see a small, elderly Asian man in a singular cardigan, be sure to smile and say hello…. 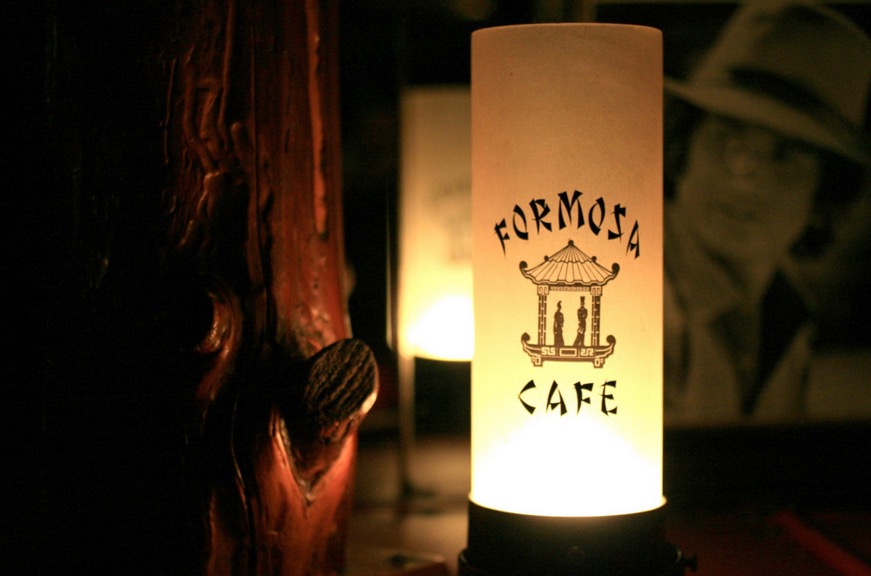 Still looking great at 76, Union Station has been the place where countless starry-eyed wannabes have arrived looking for stardom – though newlywed Martha Virginia James didn’t make it to the City of Angels. In 1943 dining car cook Robert E. Lee Folkes was arrested on arrival at Union Station, and charged with murdering her en route from Seattle.

Barely a year later, an antique black trunk sent from Chicago was opened and “Jane Doe 13” was found inside. She was eventually identified as Louise Villegas, and her bigamous husband was arrested for murder.

Mosey up at the bar, order a Traxx Martini (Hendricks Gin, dry Vermouth, a float of Dubonnet Rouge) and watch the living people arrive in this glorious, high-ceilinged Art Deco masterpiece. 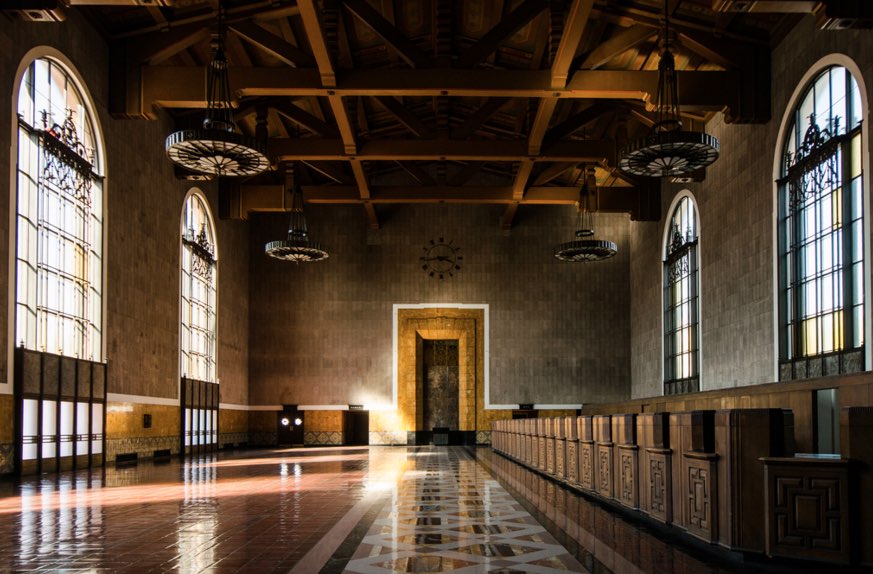 The old ticket room at Union Station. Credit: Steve and Julie via flickr

Originally the Kyte home, in 1973 it was moved in one entire piece from 1003 Ocean Avenue and down Main Street, where it ended up as a restaurant. In recent times staff at the upstairs event venue and their underworld bar, The Basement, have reported lights turning on and off, running footsteps, opening drawers, closing doors and strange noises.

Recently, two nieces of “Delia” – a former owner of the building – came to visit, and said she had disappeared a long time ago. There’s no archival evidence of Delia, but it’s possible the story comes via Mary Kyte, whose corpse was kept in a coffin in the house (as was the fashion at the time), when she died in the 1940s.

Either way the staff were convinced enough to create the “Delia Elixir,” a deliciously special cocktail of bourbon, agave, raspberries and lemon, in honor of her.

More venues, more history and more ghost stories can be found in Gourmet Ghosts – Los Angeles, available at gift shops and bookstores across LA, and on Amazon and iTunes, plus online at www.gourmetghosts.com. You can also follow on Twitter @gourmetghosts for more spooky dining info.