10 Iconic L.A. Institutions That Had to Move From Their Original Location

Los Angeles has its share of endearing landmarks, many that we can’t ever imagine the city without. Even as many of these institutions have been part of our fabric for over a lifetime, it’s hard to believe that some of the most significant have changed addresses over the years, from leading universities to culinary staples.

With that in mind, here’s a list of 10 of the most significant places in L.A. that didn’t start out where they ended up.

But then again, it was probably all for the best.

Hope you learning something new about our city and, as always, enjoy the rundown!

While there are few remaining signs today, Boyle Heights used to be the Jewish epicenter of Los Angeles. The Canters moved to Los Angeles after their first Deli failed in New Jersey. Having opened Canter Brothers on Brooklyn Avenue (now Cesar Chavez) in 1931, the neighborhood had already started its transition of Jews moving to the westside. Canter’s moved to Fairfax in 1948 into a small space which now occupies the Supreme Shoe boutique.

Five years later, it moved a few stores down into its larger and current location. Still very popular, Canter’s is a place that attracts Angelenos of all forms trying to get away for a nosh.

Living up to its name as the “House of Irish Coffee”, Tom Bergin’s has been serving Angelenos since 1936. Originally located up the street at Wilshire and Fairfax, Bergin followed his dream to build a tavern of his own just like his father. His establishment was such a success that Bergin was asked to operate the fine dining services at the Del Mar Racetrack, but ended up spreading himself too thin.

To make ends meet, he moved the restaurant just down Fairfax ultimately moving into a larger spot. Tom Bergin’s has changed owners a few times since, but had an extensive renovation completed in 2012 and still holds the character of the original restaurant.

The original Chinatown was located east of what visitors refer to as Olvera Street on the opposite side of Los Angeles Street. Its roots are traced to the early Chinese immigration to the US. This Chinatown grew in the 1860’s as one of the most volatile neighborhoods in the country, with an extremely high murder rate. Most noteworthy, the “Massacre of 1871” claimed 19 lives from a ransacking mob of 500 of white settlers.

Over 200 buildings became part of Chinatown, but the city soon grew weary of the nefarious nature of this neighborhood. In the 1910’s, the area began its decline and eventually was cleared out to make way for Union Station. The new Chinatown took a few years to form into the area we know around Broadway today.

You can argue about UCLA’s true origins, but not about the fact that it was entirely Westwood bound. In 1881, the state legislature formed a southern branch of the California State Normal School, at the future site for the Central Library, for the purpose of training teachers. It moved north to a larger campus up Vermont Avenue in 1914 on what is now Los Angeles Community College.

It gained University of California status in 1919, but once again outgrew it’s environs and immediately looked for a new site. The story goes that developers had their employees serve as chauffeurs to influence the search committee’s decision. Their plot worked and the Janss family “donated” land to UCLA and Westwood had its new campus. 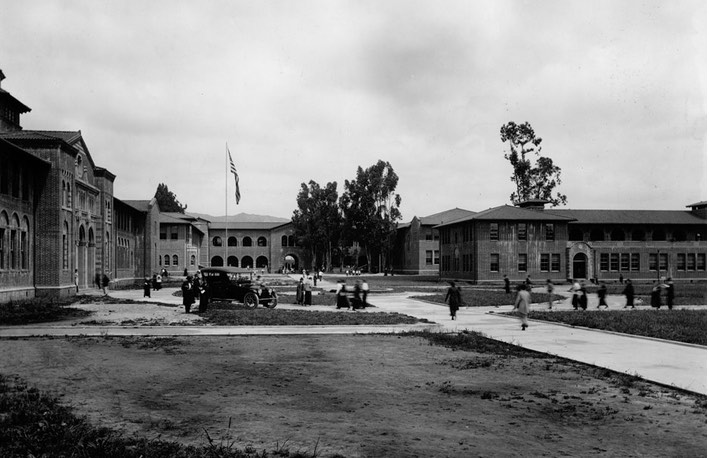 The Pacific Dining Car has the perfect story for one of LA’s most “mobile” businesses. Wanting to create a railcar restaurant of their home, Fred and Grace Cook built their own dining car in a friend’s backyard and moved it to 7th and Westlake in the middle of the night in 1921.

While business was good, they lost their lease and we’re forced to pick up and roll to their current location at 6th and Witmer. The restaurant’s current form has changed coming from a significant remodel in 1975. The Pacific Dining Car still serves fine dining 24 hours a day, a feat that few eateries can match.

We’ve all driven down PCH and come across that massive glade of grass with the slight sense of envy of how perfect life seems in this idealistic Malibu setting. It’s strange to imagine any other setting for it, but Pepperdine was founded in the heart of South LA. The original campus was created in 1937 over 34 acres on Vermont Ave. and 79th Street. The school was built in the Streamline Moderne style with some of the buildings still donning the classic white paint today.

As racial tensions hit the area in the 1960’s, the university started looking outward to areas like Valencia, Westlake Village and Orange County, but when Pepperdine was offered 138 acres by donation up the coast, the offer was too good to refuse. Classes at the new location started in 1972 and the campus was sold to the Crenshaw Christian Center, which later built the 10,000 seat Faith Dome, one of the largest churches in the country.

There are few things that divide Angelenos. Bruins versus Trojans. Bloods versus Crips. The Valley versus Locals Only. Kobe versus Shaq. But the biggest of them all has to be Philippe’s against Cole’s. Both lay claim to inventing the French Dip and argue over who’s been around longer. Philippe’s was birthed in 1908 near the corner of Temple and Alameda, but it wasn’t until ten years later when the restaurant moved up the block to Aliso that the famous sandwich was said to be invented.

It later moved over a block again where it stayed until 1951 when it relocated from 101 freeway construction to its current location where you can still enjoy their superior sandwich. Wait. Did I just say that?

The city’s most venerable eatery qualifies for this list not by it’s own doing. The Original Pantry opened its doors at Figueroa and 9th for the first and last time in 1924 (that’s because it’s never closed except for one bad health inspection).

It added a dining room ten years later, but in 1950 the restaurant was forced to move down the block to make room for a Harbor Freeway off ramp. In true Pantry fashion, the restaurant transitioned locations seamlessly without closing for one day still not needing locks on its doors.

The Warner family had movie making in their blood starting out as traveling exhibitors in Ohio and Pennsylvania in 1903. While they were profitable as distributors, they knew the real money was in production. Their first big picture, My Four Years in Germany, was such a success that they made their move to Hollywood later that year in 1918.

They bought a large lot of land on Sunset Boulevard for what originally was called West Coast Studios. Here, the landmark picture The Jazz Singer was filmed ushering in the new era of talkies. In 1928, the Warners bought land in Burbank and slowly began transitioning into the valley until it closed its Sunset location in 1937. It served as a sports center and bowling alley until Paramount bought the property in 1954 and bulldozed many of the original buildings. It is now known as the Sunset Bronson Studios and still has its executive office building greeting passersby today.

With all the hype surrounding Clifton’s reopening and restored facade, we are all eager to welcome back one of the most significant cafeterias in the country. While there is much history to the landmark on Broadway, the original Clifton’s opened at 618 S Olive in 1931. Eight years later, this cafeteria was remodeled into a tropical paradise called Clifton’s Pacific Seas, complete with waterfalls and lush foliage.

While the Clifton empire rose to eight restaurants, the Pacific Seas was closed and demolished in 1960. The Broadway site was Clifton’s second location, opening in 1935. The cafeteria was sold off from the original Clinton family in 2010 and an extensive renovations began a year later.

What local businesses do you know that have had to change addresses over the years? List them out in the comments below!