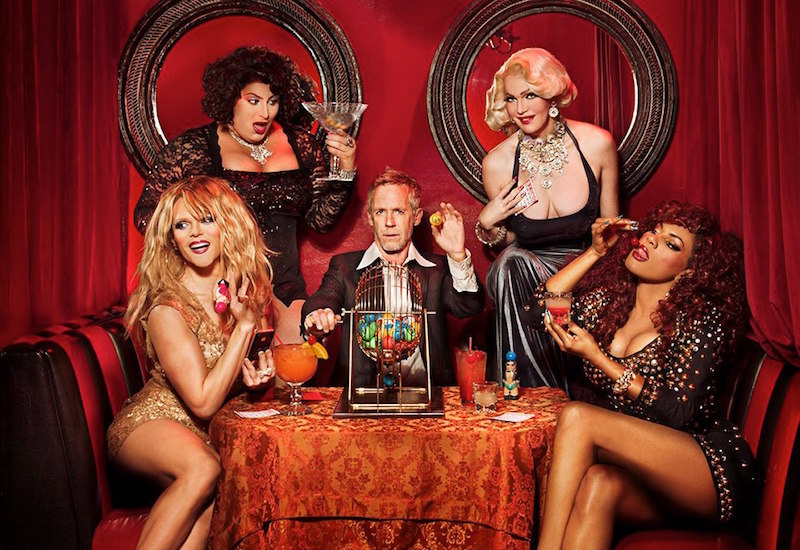 At Hamburger Mary’s in West Hollywood patrons of all ages—including entire families—line up for their chance to win Los Angeles’ most fabulous game of chance: Legendary Bingo. Affectionately known as Drag Queen Bingo due to the frequent appearance of perfectly coiffed drag callers, the event has raised over $6.5 million for various charities in the 20 years it’s been around. But that hefty sum belies a humble beginning, when it was just one man with a bingo wheel at a now-defunct coffee shop, raising money for a single cause close to his heart.

Legendary Bingo founder Jeffrey Bowman grew up in Orange County, then moved to Los Angeles to pursue a career as a writer. He’s since penned articles, plays, and a rock opera about Linda Lovelace, but he is perhaps best known by the sobriquet ‘Bingo Boy.’

As the creative Angeleno is wont to do, Bowman’s worked a lot of jobs. In the 1980s, during the onset of the AIDS epidemic in the United States, he was managing Revolver, a gay bar in West Hollywood. One of the virus’ earliest victims was Bowman’s best friend.

“I was very affected by it,” Bowman says. “The way that I thought we could deal with it was having celebrations of life [while] at the same time raising money.”

Bowman admits he’s always found himself drawn to people “on the fringe,” including performers and creatives. He also enjoys introducing these eclectic friends to one another and gathering them to assist like-minded causes. Bowman recruited these friends for fundraising events at Revolver, benefitting nonprofits like AIDS Project Los Angeles (APLA), which had formed in 1983 to help those living with and affected by HIV and AIDS.

One night, Bowman charged people five bucks to come watch L.A. billboard icon Angelyne host a men’s fashion show at the club. As most Angelenos know, Angelyne is notoriously reticent in public appearances, frequently only communicating in breathy coos. The fashion show was no exception.

“She had this microphone and the guy would come out, and she would just be like, ‘ohhh,'” Bowman laughs. “It was a disaster in the best way.”

By the mid-90s, Bowman had changed jobs and was working in membership services at a gym, also in WeHo. He was approached by a pharmacist who ran a nearby HIV specialty pharmacy. In those days, Bowman says, patients went to their doctors, their pharmacy, and then home. They assumed, often rightly so, they were destined for an early grave. The pharmacist hoped that Bowman could manifest a positive atmosphere that would break up the monotony for the patients.

Bowman responded by creating a reading and resources center within the pharmacy where patients could watch old movies on TV, listen to music, and learn about herbs and supplements that might help alleviate some of the pains they were experiencing. Yet not long thereafter, health professionals began treating HIV and AIDS with what is known as the “AIDS cocktail,” a combination of drugs that has since drastically prolonged the life expectancy of patients. A diagnosis was no longer the so-called “death sentence” it had once been.

“All of a sudden people are coming to me and saying, ‘I’m going to live but I don’t have a job,'” Bowman says. “They’d sold their life insurance policies and everything. So I had to switch everything around. Now, instead of helping people die, I was helping people live.”

Bowman again acted as an organizer, recruiting self-help gurus, nutritionists, gym trainers, and anyone who could help patients get the life they thought was over back on track. Through this work, he was approached by APLA to come work for them directly. He accepted, and soon found himself putting on lavish, $1000/plate fundraisers for the group. Yet while the work and the funds were important, it wasn’t the kind of thing Bowman naturally gravitated towards.

“I was dealing with movie studios and limo companies, but I missed dealing with the patients and people,” he says. 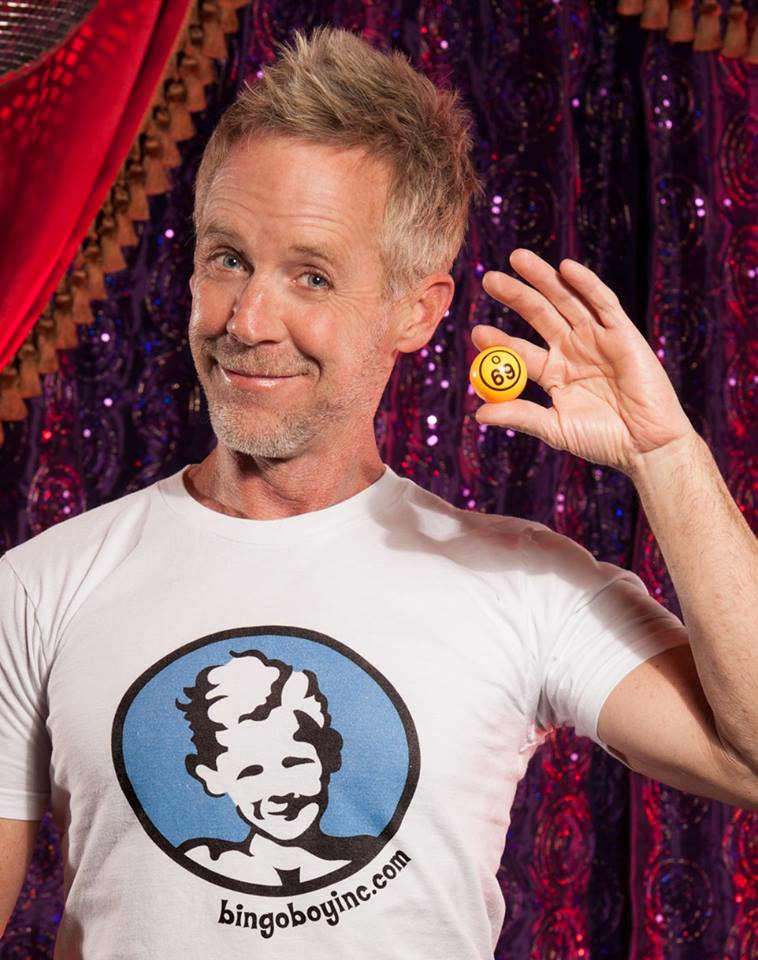 So, he created a different title for himself—Community Events Coordinator–and returned to what he knew: throwing small community events, akin to those he’d helmed at Revolver a decade prior. This led him to the now-shuttered Stonewall Gourmet Coffee, where he ran a simple, weekly bingo night. He charged a dollar a game and stood at the counter with his bingo wheel. Bowman called the night Legendary Bingo, despite the fact, he notes, that the games were not at that point ‘legendary’ in the slightest. But the name turned out to be a self-fulfilling prophecy.

At first, there were maybe 10 players a night, but the crowd slowly blossomed, week by week. Eventually, Bowman was introduced to Scott Presley, who performed in drag as The Fabulous Belle Aire. Bowman recruited Belle Aire as a co-host and on that day, Legendary Bingo changed forever.

The duo’s combined charisma was compelling. Celebrities began to make appearances, including actress Jean Smart (Legion, 24), who was shooting road trip flick Forever Fabulous, in which Presley had a role. Golden Girls star Estelle Getty (The Golden Girls) came by, as did actress and philanthropist Tippi Hedren. They were soon able to expand to include more charities; now, they pick a different one every time.

It was also Stonewall where Bowman created a persona for himself. Stonewall served a protein smoothie for bodybuilders, advertising it with a flyer featuring a cartoon image of a boy wearing swimming goggles. Bowman took the image and an old photograph of himself as a child, then swapped his head for the boy’s. Thus Bowman became ‘Bingo Boy,’ a nickname that’s stuck for the last two decades. At the time of our interview, Bowman was even wearing a bracelet someone had made him which read, in lettered beads, ‘Bingo Boy.’

Other things have stuck, too, as the event has evolved. One night, Bowman observed a lackluster crowd, clapping begrudgingly for the winner of one of the games.

“Well, if you’re going to be such babies about it, just wad up your cards and throw them at her!” Bowman told the crowd.

They did. Now, winners of the game can expect to be showered with crumpled cards as the audience chants, “Pelt her! Pelt her!” Other details are in the callbacks that occur each time a caller plucks a ball from the bingo wheel.

Some of the callbacks are raunchy; if a caller gets the number 69, the crowd might yell, “Dinner for two!” The latter Bowman attributed to actor Jack Plotnick, who ad-libbed the quip as a guest one night.

Legendary Bingo’s migration to Hamburger Mary’s occurred after Stonewall went out of business. For a while, Bingo Boy and Belle Aire were bingo nomads, moving around from venue to venue. After a particularly bad experience at a dark, empty bar in 2003, however, Bowman returned to Santa Monica Boulevard and went up and down the street looking for a new home. He got a lot of negative responses, including from the newly opened Hamburger Mary’s.

“They said no three times. It was like Jesus and Peter,” Bowman quips. “But I knew it was the perfect place.”

Finally, the bar told Bowman to go to WeHo City Hall and ask them for permission, as the bar was still working on solidifying its entertainment license. City Hall is just across the street from Hamburger Mary’s, so Bowman did just that. City Hall said yes, and so for the last 15 years, Legendary Bingo has fundraised for countless charities at the pink-hued burger bar. Bowman recalls all sorts of star-studded anecdotes.

There was the night Richard Simmons showed up and led the crowd in a workout. “People were crying,” Bowman said.

There was the time Molly Shannon was a guest, and, when G-50 was called, re-enacted her SNL Sally O’Malley skit all around the bar—which, has been preserved in the annals of our time on YouTube for your enjoyment.

Yet the most important nights, for Bowman, are the ones where entire families come and enjoy themselves.

“Parents have brought their trans kids. It gives me so much joy to see those kids smile and realize, ‘Hey, I’m okay.’ There was one kid who came in a wig and lipstick, maybe 8 or 9 years old,” Bowman says.

Bowman introduced himself to the child and asked how they were doing. They replied, “I’m scared, but I’m hopeful.” Bowman admits it’s anecdotes like that that give him chills, in the best way.

Though the venue hasn’t changed, the cast has. Belle Aire ultimately moved away, and now a new crew has joined Bowman—not all of them drag queens, but each one full of personality. They include Calpernia Addams, Roxy Wood, Deven Green, Willam Belli, and Joel Bryant. They perform five shows a week at Hamburger Mary’s—two on Wednesday, one on Thursday, and two on Sunday—as well as other venues around town and at private parties. Bowman estimates he’s completed over 20,000 shows by now. He’s got no plans to stop, though he may one day seek his own space. Perhaps, he muses, ‘Bingo Boy Brewery’ has a ring to it.

For your chance to play and to see what charities you can support, visit Legendary Bingo online and check out their events calendar. It’s $20 for 10 games, and 75 percent of all proceeds go straight to that night’s charity.