Jonathan Gold Helped Me Fall in Love With My Own City 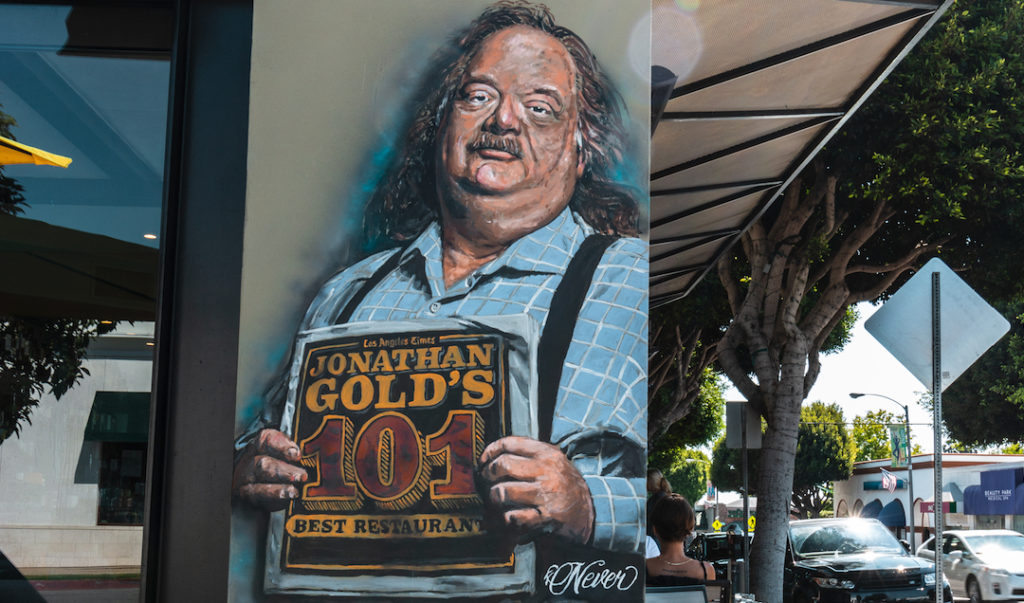 A Jonathan Gold mural by artist Jonas Never outside of Margo’s in Santa Monica.

The first time I spoke to him, we were next to each other at a red light at the corner of Los Feliz and Griffith Park Blvd. The windows of his green Dodge Ram were rolled down. I was starstruck, but I had to say something. Finally I blurted out, “Hi, I don’t mean to bother you, but I’m trying to be a food writer, and I’m just really inspired by what you do.”

But let’s go back a bit.

When you grow up in Los Angeles, everybody you know is also from here. It’s not weird to meet a ton of native Angelenos. But when you live here as an adult, it’s a much different story. Childhood friends move on, transplants take their place. Two out of every three people you encounter will call you a “unicorn” simply because you were born within the county limits.

For awhile it seemed like I might be one of the many who moved on. Just another ex-Angeleno. San Francisco was my college town. As a wide-eyed 18 year-old in a bustling new city (a city not yet overrun by tech bros), I fell head-over-heels in love.

But San Francisco never quite reciprocated the way I hoped it would. “Beat L.A.”, the Bay Area’s most heartfelt and vitriolic sports motto, was baked into the opinion of pretty much everyone I met. That viewpoint of Los Angeles infected me. It followed me home after I graduated. It followed me into my first big kid startup job. Even as I was making a life for myself in L.A., I wasn’t even sure if I liked living here.

But things change, as they so often do, over a great meal and a chance encounter.

I was at Mom’s Bar-B-Q, a hole-in-the-wall in Valley Glen owned and operated by Genevia Fontenette, a Louisiana import with an intimate knowledge of southern cooking. Mom’s offers all the BBQ basics: pork ribs, beef ribs, rib tips, any of which comes with ample sides of potato salad or collard greens or black-eyed peas. Mostly, however, you come here for the fried catfish, which in my humble opinion is better than anywhere else in the city — crunchy, salty, briney off the blocks but with a sweet, clean finish that never makes you look back.

In between nibbles of catfish I chatted with a stranger who told me it was his first time there. He’d come on a recommendation from Jonathan Gold. I knew the name, but “L.A. Times Restaurant critic” was more or less the extent of my knowledge of the man. Still, the fact that he was recommending Mom’s, that told me something.

I went home and researched more of Gold’s work. As I dove deeper and deeper into his old reviews I realized that while he was leagues above me in talent and knowledge, we did have one thing in common — we loved food, especially from places that don’t normally get much fanfare or buzz. I cherished the idea of a restaurants critic who was just as passionate about tiny little spots as he was about fine dining. It was simply something I had never heard of before.

Inspired by his writing, I embarked on food finding missions of my own. The more places I tried, the more I yearned to find new flavors and experiences. It was like being introduced to my own city, for the second time, for the first time.

I followed him to more Valley strip mall haunts. I learned new spots like Kobee Factory, and confirmed suspicions of greatness from places I already loved, like Go’s Mart and Tarzana Armenian Deli. I upped my game, driving to Boyle Heights for Mariscos Jalisco, and Artesia for Rajdhani. I found myself pulling over while driving — what’s that place, a Peruvian sandwich spot? — or looking at Yelp photos of menus. I tried Ethiopian food, and Punjabi food, and Cambodian food, and so many other things I’d never eaten, experiencing Ratatouille moment after Ratatouille moment, when everything else fades out, and all you can feel are the wonderful new flavors you’re experiencing for the first time. Food became my life.

Flash forward a few years and I was working in TV, sort of floating through life, aimless, not sure of what I was doing. The only thing I really knew was that I loved to write and I loved to eat. And it seemed like this trail of Gold must be leading somewhere.

Why not write about food, right? I already had 18 years worth of knowledge, plus everything I had discovered in the years after college. In 2014 I had my first piece of food writing published. I haven’t looked back.

Since that day at Mom’s, there’s never been a time when I didn’t have a list of restaurants to try. The “Beat L.A.” mentality that New York, Northern California, Miami, and so many other places cling to has been completely deleted from my head. I love this city. I love its food. I always did, but Jonathan Gold brought that to the surface for me. He nudged me towards my path. He showed me what I want out of my life. He made me fall in love with the place I was born. I owe him for that.

So there we were, at the intersection of Los Feliz and Griffith Park. Him the savant of culture and food. Me the fanboy. “Hi, I don’t mean to bother you, but I’m trying to be a food writer, and I’m just really inspired by what you do.”

His mouth drifted into an odd smile and then he looked at me, “If you eat food and you write about it, you are a food writer.”

The light turned green and we went on our way.

A Go Fund Me campaign has been set up for Jonathan Gold’s family in the aftermath of his sudden passing. You can go here if you would like to support.

Wilder Shaw is a Los Angeles-based writer and comedian who usually has tacos in his hands and sandwiches on his mind. Follow him here on Instagram and Twitter.