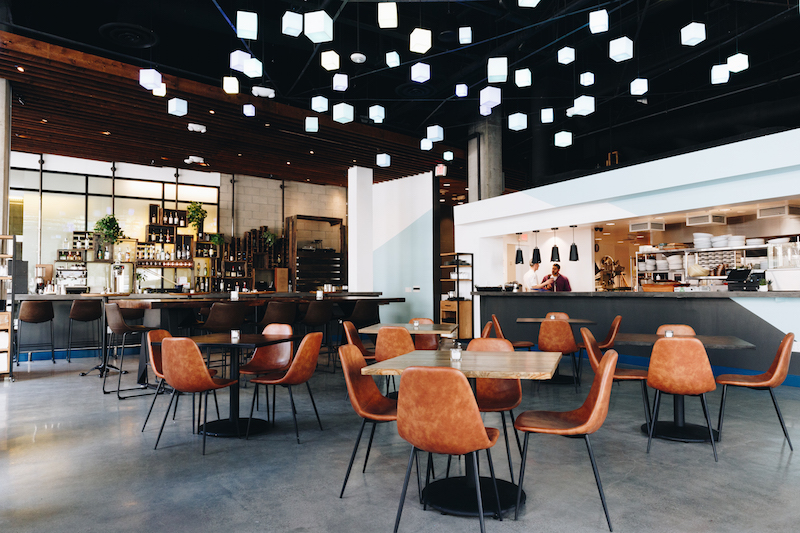 KASIH is one of downtown Los Angeles’ newest restaurants, and one of a handful city-wide that specializes specifically in Indonesian cuisine.

KASIH, which translates to “love, affection, and care,” comes via Chef Vindex Tengker (MasterChef Indonesia, Four Seasons) and Chef de Cuisine Zachary Hamel, who previously worked at West Hollywood’s Southeast Asian hot spot, E.P. & L.P. Tengker grew up in Manado, while Hamel was born in Wisconsin, but moved with his parents at age nine to Thailand. Hamel later attended Le Cordon Bleu in Bangkok, and studied in Jakarta, Bandung, and Bali with Tengker before opening KASIH.

“For a newcomer to Indonesian food, the flavors that set it apart are similar to those found in Thai food – lemongrass, shallot, galangal, ginger, kaffir lime leaf, fresh chili,” Hamel said. “The difference between the two is the seasoning. Indonesian food is a tad sweeter than Thai. Less fish sauce, more sweet soy, salt and sugar.” 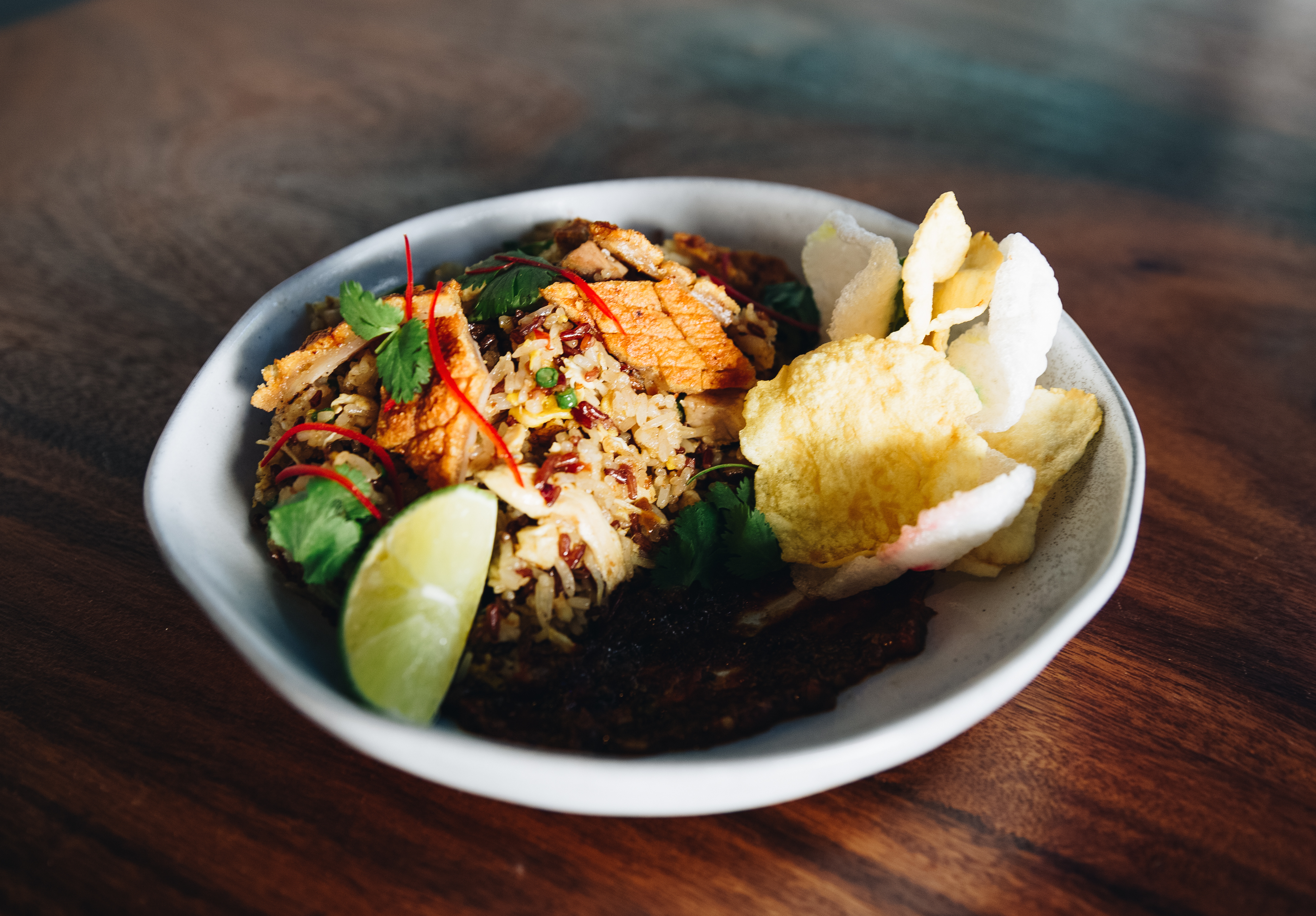 Which isn’t to say that cooking styles don’t vary across the nation, which is made up of more than 17,000 islands, over 900 of them permanently inhabited. Tengker said that with KASIH, their mission is to “provide an education in the many unique cultures and cuisines that make up Indonesia. Each island has its own dialects, traditions and signature dishes, which are represented on our menu.”

The menu even features a map of Indonesia, with notes about a few of the islands for context. “Bali,” it reads, “is our most visited tourist destination.” Java Island, as one might guess, is known for growing coffee and is where the broad term ‘java’ originated. At KASIH, a take-away window opens at 7 a.m., Monday through Saturday, to serve espresso, coffee, and pastries. You can certainly order a flat white or iced latte, but if you order the kopi jahe, an ample amount of smashed ginger will give your morning routine a kick.

Venturing inside, the space is large, open and industrial with concrete floors, high ceilings, a partially open kitchen, and blue and pale green lights hung from the exposed ceiling. There’s also a fairly spacious patio outside. 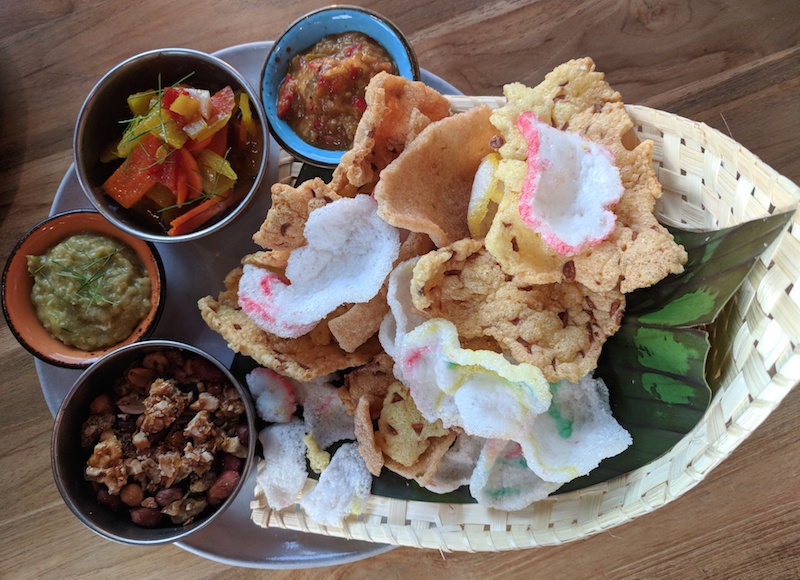 A typical meal at KASIH might start with a sambal tasting ($15), in which various, house-made spicy dips can be scooped up with shrimp and poppyseed crackers and paired with pickled vegetables. The pineapple sambal is particularly good, the fruit providing a sweetness to offset the heat.

Other light starters include the asinan kelapa. Asinan is a pickled vegetable or fruit dish and kelapa translates to coconut. It’s comes as a bright slaw with a crunchy texture and plenty of spice. The menu, which notes the spice level of each dish, lists the slaw as one of the hottest on the menu. Definitely don’t pass on the kangkung, which in English is occasionally called water spinach or morning glory (and sometimes mistaken for kale). The leafy green vegetable is served cooked in a savory and incredibly flavorful turmeric broth.

Meatier dishes include soy-glazed chicken skewers; rendang sapi, a beef curry made with fingerling potatoes, spinach, and pearl onions; and crispy duck served with a green tomatillo and kaffir lime sambal. For something hearty, try the Nasi Kasih, in which fried rice is mixed with pork, chicken, shrimp sambal, and topped with a fried egg.

Behind the bar, guests will find a small selection of draft and bottled beer and cider, much of it Californian, and a sampling of wines. Cocktails include an Old Fashioned made with banana-infused bourbon, a pear brandy mule, and the sweet Tambling, made with bourbon, lemongrass tea, and raspberry liqueur.

“KASIH is perfect for Los Angeles, where ‘exotic’ food can easily become an everyday favorite,” Tengker said. “L.A., like Indonesia, is full of people who love to eat, love to celebrate life together while enjoying a delicious meal, and who appreciate the love and care that goes into making these authentic dishes.”