The Valley Has a New Gaming Center with VR, Escape Rooms, and an Arcade 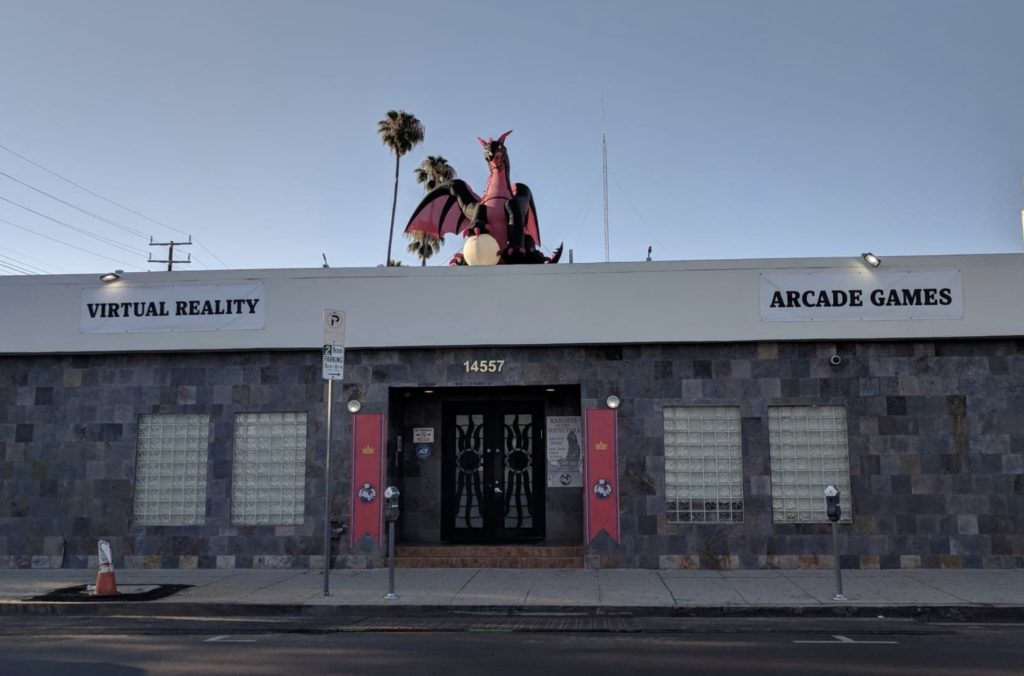 LA Dragon Studios in Van Nuys features a medieval-themed escape room, virtual reality, and an arcade. The family-friendly gaming center is hard to miss; just look for the big inflatable dragon on the roof.

Adam Rubanenko is a nurse by trade, but opened Dragon Studios with his brother, Roy Rubanenko, because they’re both self-described “gaming fanatics” who fell in love with escape rooms. Rubanenko is American-Israeli and played his first game in Israel in fall of 2016.

“[Escape rooms] are huge in Israel; they’re as popular as going to the movies,” he said. “Most people do one or two and they either hate it or they get addicted to it. We loved it.”

Rubanekno played about 20 games while visiting family and friends in Israel, then explored the escape room market in Southern California. The siblings soon decided to open their own gaming center, launching Dragon Studios in late 2017. Dragon Studios shares a building with Rubanenko’s other venture, running home health agencies, and he jokes there’s probably no other building that contains those two drastically different businesses.

Dragon’s escape room experience, “Knights of the Round Table,” is a Tel Aviv import that leans heavily on legend of King Arthur. The traitor Mordred is en route to Camelot. In the hour before the attack, Merlin recruits your team to enter the castle and solve its secrets to defeat Mordred’s army. Costumes are encouraged, though we don’t suggest a full suit of armor, just for mobility purposes. Solving the room will require hunting for hidden objects and paying close attention to each room’s various artifacts.

The game is suitable for adults and children, as hints can be tailored to any group’s difficulty preferences. They’re gained by raising your hands to the sky and imploring the wizard for help. Upon request, you can even get an actor to play Merlin and hang out in the room with you—perfect for a fully immersive kids’ birthday party. Like most escape rooms, players have an hour to complete their mission, though it is possible to finish sooner if you’re a particularly quick puzzle solver.

Dragon also offers Hydra Squad VR, which serves as something of virtual reality arcade. Dragon has partnered with Canadian VR company VR Cave, which provides them with their content. Currently, they have two 35-minute escape games—underwater adventure Depths of Osiris and sci-fi quest Space Station Tiberia—and one 15-minute haunted house experience, Hospital of Horrors. In September, they’ll add another escape game and haunted house to their catalogue.

Groups of up to four at a time are outfitted with HTC Vive Pro headsets and controllers as well as  MSI backpacks, which allow for free-roaming as opposed to being tethered by cords. When in VR, players can see each other’s heads and hands in-game. For instance, if you’re playing Depths of Osiris, you’ll see your partners as disembodied deep sea diving helmets and gloves.

Winning these games will require both puzzle-solving, teamwork, and coordination, as you’ll have to defend yourself from sharks and meteors and figure out how to move objects in VR. As we learned when we visited Hollywood VR arcade Virtual Room, that can sometimes be harder than it looks.

Hospital of Horror plunges guests into a series of increasingly creepy rooms in a dilapidated medical facility. Things quickly spin out of control in each room, while disembodied figures whisper in your ear. Horror connoisseurs won’t find it particularly scary or gory, but the inescapable 360 experience will likely make even the most hardened haunt fan jump at least once.

For those who have exhausted Dragon’s puzzle games, they also offer a retro arcade. No quarters are needed; just pay a $10 fee and you can play from open to close. Games include foosball, air hockey, The Fast & the Furious driving simulators, shooting game Area 51, and more. Additional space is available for parties or team-building events, complete with seating, a kitchen, and TV, if you’d like to make a day of it.

Rubanekno also runs Escape Network Alliance (ENA) for industry professionals and enthusiasts to talk and meet up. There are chapters for L.A., Orange County, and the Valley.

L.A. Dragon Studios is located at 14557 Friar Street, Van Nuys. Open Monday through Thursday, 5:30 p.m. to 10 p.m.; Friday 5:30 p.m. to midnight; and Saturday and Sunday, noon to midnight. The escape room starts at $29.75/person, while Hydra Squad VR starts at $30/person. Access to the arcade is $10/day. Discounts are available for large groups and private parties; contact Dragon Studios to find out more.