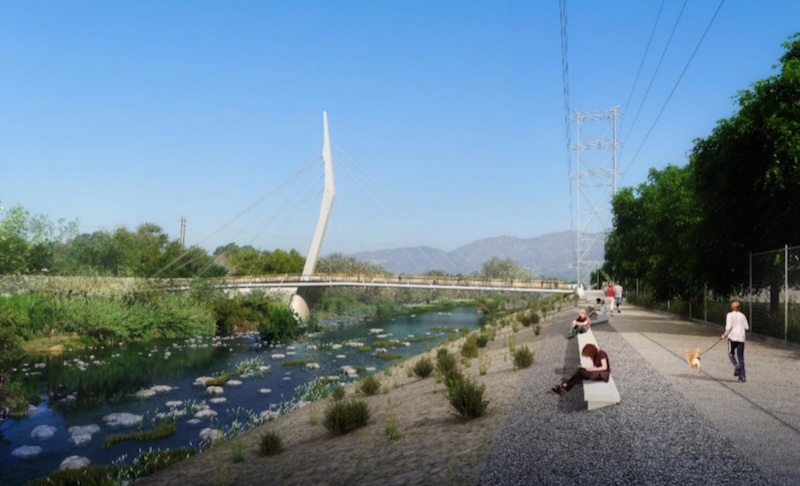 Next month, construction will begin on the first of three possible new bridges across the Los Angeles River. The North Atwater Bridge will be open to people on foot, bike, or horseback, and will span 325 feet between North Atwater Park and Griffith Park. According to Curbed LA, the LA River Bike Path will be closed for construction come late April. The portion of path affected by the closure runs from Los Feliz Boulevard to Colorado Street. Cyclists should instead take Crystal Springs Road into Griffith Park.

Plans for the project materialized in 2007, when Mia Lehrer, the landscape designer who helmed the L.A. River master plan, stressed the need for more bridges. She pointed out that children who lived in Frogtown but attended nearby Sonya Sotomayor Learning Academies were walking 25 minutes to school because they couldn’t simply cross the L.A. River, KCET reports. She introduced philanthropist Morton La Kretz to the Bureau of Engineering, who donated $4.75 million towards the bridge’s hefty $16 million price tag.

Equestrians had long wanted a bridge that allowed them and their animals to safely cross the river. One public commenter said he’d seen several accidents as horses attempted to cross the river, and council documents dating back over a decade discuss the dangers of the “slippery cement and algae lined floor of the River Basin.”

Curbed notes that a second bridge allowing access from Cypress Park to Elysian Valley will get underway this summer, while a third connecting Glendale to Griffith Park is pending funding.