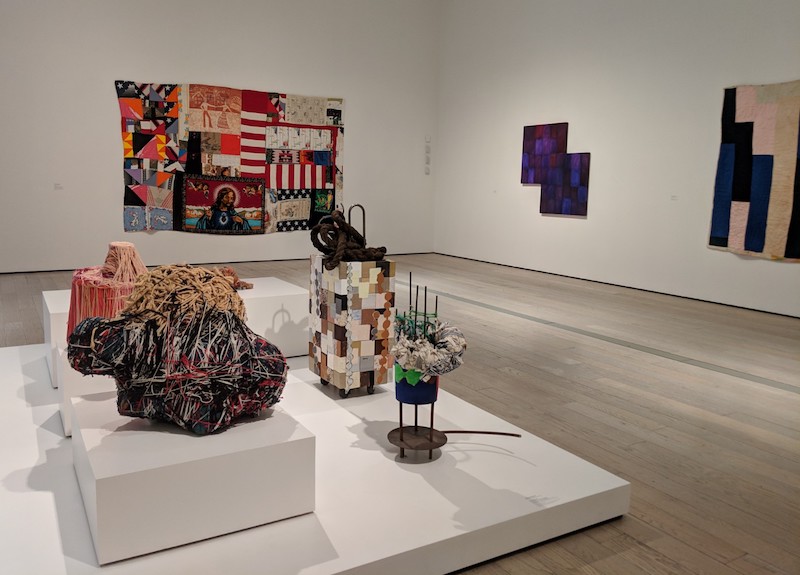 In LACMA’s latest offering, Outliers and American Vanguard Art, the goal is to highlight a period in American art history when avant-garde artists and outliers (that is, artists without formal training) intersected, and grapple with the questions provoked by this juxtaposition. The exhibition includes several fiber sculptures created by three women: Nancy Shaver, Judith Scott, and Jessica Stockholder. Each has their own story to tell.

Shaver studied at the Pratt Institute in Brooklyn in the late ’60s, while Stockholder has an MFA from Yale. But Scott, who was born with Down syndrome and has lost most of her hearing, spent 35 years in an Ohio institution until her twin sister Joyce became her guardian and moved her to California. There Scott grew into a prolific fabric artist after witnessing a demonstration in the medium at the Creative Growth Art Center in Oakland. For Lynne Cooke, Senior Curator of Special Projects in Modern Art at the National Gallery of Art in Washington, D.C., the works all deserve equal treatment.

“I don’t think we need to segregate the work of Judith Scott…from the other two,” she said during a press preview of the exhibit. “I think they work very well in the same context. And if we don’t see a difference, then why do we make a distinction?”

These are the kinds of questions one might ask in this exhibit, where trained artists—the “vanguard” portion of the title—are presented alongside the self-taught or the “outliers.” If someone is privileged enough to study art in an academic setting, is their work any different from the creator who makes art their own way, using what is available to them? What is found at the intersection of these artists?

LACMA is the third and final stop for Outliers following its D.C. debut and a stint at the High Museum of Art in Atlanta. Cooke’s detailed curation features over 250 pieces by some 80 artists, all organized into three chronological sections: the mid-1920s through the early 1940s, the late 1960s through the early 1980s, and the mid-1990s until now. Each offers specific moments in art history where the avant-garde and ‘outliers’ intersected in their work. These moments include the Great Depression, WWI and WWII, and civil rights movements.

If you’re looking to make a trip to the art museum into a game, you could try to figure out which artists on display were formally schooled in art and which ones were not. It’s kind of like those person-on-the-street taste test commercials, but instead of trying to pick a brand out of a lineup, you’ll be learning a lot about American art history.

For instance, in the same space as the fiber sculptures, one might notice several quilts. Some reference the 2002 touring show, The Quilts of Gee’s Bend, in which quilts and other works made by black women in the Alabama community Gee’s Bend—population 275, as of 2010—were displayed. These selected works hang with quilts by Rosie Lee Tompkins and Howardena Pindell. Both are celebrated artists, but, in the spirit of the exhibit, have very different backgrounds. Tompkins learned to quilt from her mother in rural Arkansas, then resumed the practice while working as a nurse in Northern California. Howardena Pindell is a highly educated abstract artist and professor who earned her MFA at Yale and worked at MoMA in NYC for over a decade. 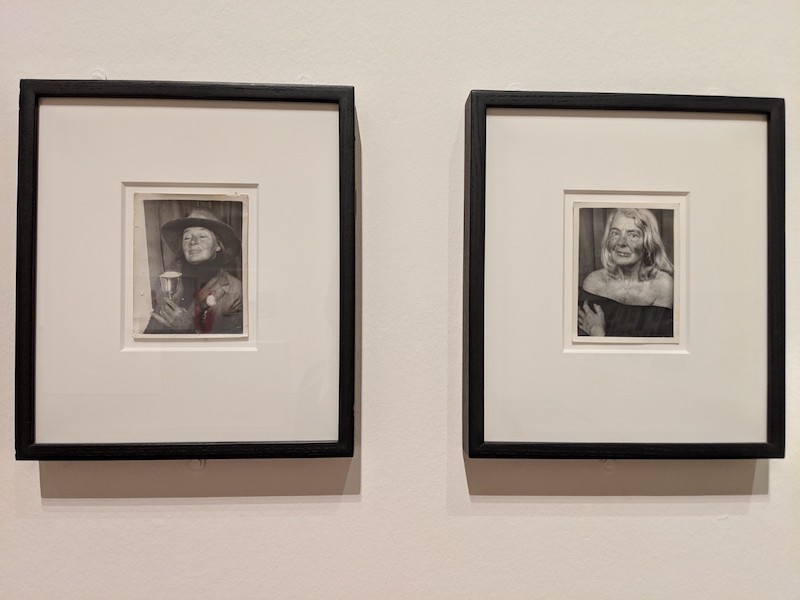 In a gallery of feminine images, visitors will find work from acclaimed photographer Cindy Sherman, as well as from self-taught artist Lee Godie. Godie never had the opportunity to attend the Art Institute of Chicago, but she did sell her work on its steps. The exhibit includes both her drawings and self-portraits she took in photo booths while using clothes and makeup to create different characters and styles. Ralph Rugoff, director of London’s Hayward Gallery, which featured an exhibition of Godie’s work in 2013, called her photos as “gripping as works by any trained photographer.” She is said to have kept her clothing in a department store locker while living on the streets. PBS reports that she supposedly had a fur coat in her wardrobe, which she’d open to reveal art for sale.

Visitors will also see work from transgender artist Greer Lankton, including drawings and dolls. In one case, two detailed dolls stand side-by-side, one of former First Lady Jacqueline Kennedy Onassis in her iconic pink suit, the other of Warhol Superstar Candy Darling in nothing but heels and an open, feather-lined robe. 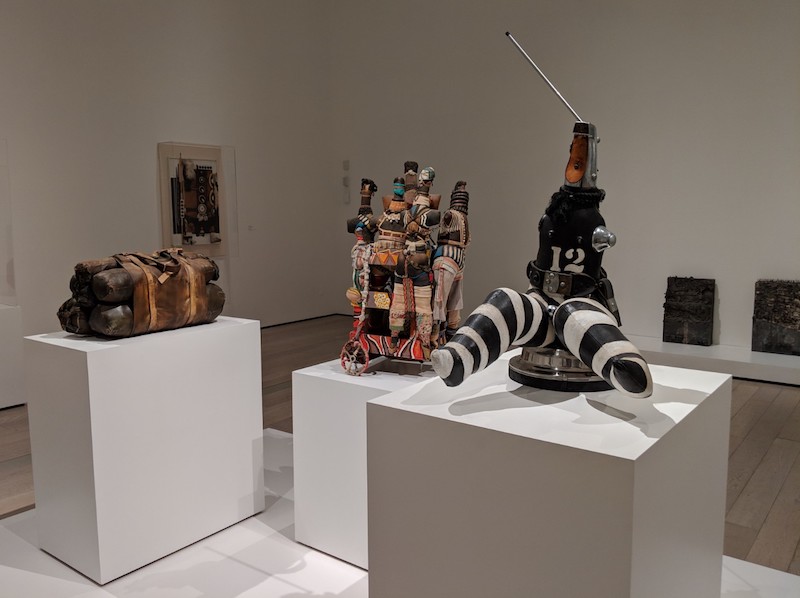 Another gallery contains work from artists Betye Saar, John Outterbridge, and Noah Purifoy, who began creating work using “black collectibles” (items for sale that featured racial caricatures) following the Watts Riots in 1965. The following year, Purifoy and several other artists used debris from the aftermath of the riots to create 66 pieces of assemblage art, calling the exhibit 66 Signs of Neon. In his final years, Purifoy moved to Joshua Tree where he created a massive outdoor museum of assemblage art.

Yet another space features art from the American South, including pieces from Mississippi blues musician, grave digger, and sculptor James “Son Ford” Thomas. Among his many creations were human skulls, modeled from clay, occasionally using real human teeth or dentures to line their gums.

Elsewhere are watercolors by Henry Darger, a hospital janitor whose massive illustrated fantasy epic, The Story of the Vivian Girls, in What Is Known as the Realms of the Unreal, was not revealed to the public until discovered by his landlord. Darger is believed to have spent years quietly creating the bizarre 15,145-page tale. 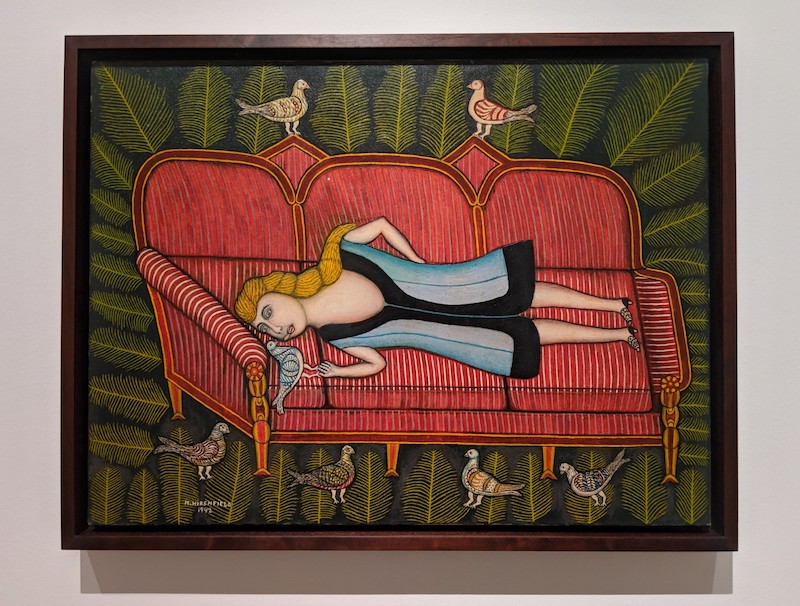 In the chronologically earlier galleries, one might be drawn to the drawings of Martín Ramírez. The self-taught artist completed more than 300 pieces during the last 15 years of his life, during which he was institutionalized in the DeWitt State Hospital in California. Also of note are Morris Hirshfield‘s colorful “Tiger” and “Girl with Pigeons” paintings. Hirshfield owned a lucrative clothing business before enjoying a retrospective at MoMA in 1943, despite his lack of formal art training. The press hated the work of this so-called “primitive painter” so much that Alfred Barr, the museum’s very first director, was forced to resign, despite not actually orchestrating Hirshfield’s show.

Today, however, Hirshfield’s work has a place among his fellow artists, “outlier” and “vanguard” alike. And for those who find themselves frustrated by the idea of monied and degreed gatekeepers, a diverse show like this can be particularly inspiring.