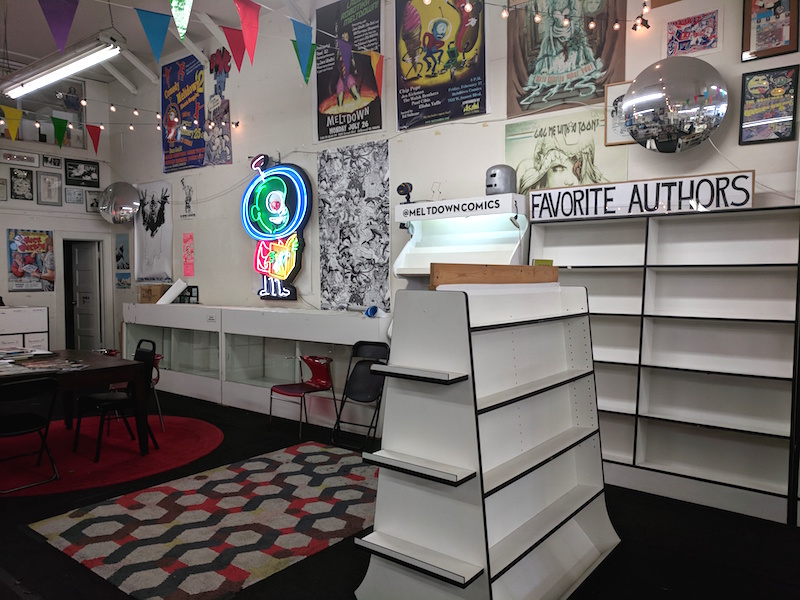 On the legendary Meltdown Comic’s final day, the once-robust comic book shop was all but barren. Some shelves had been completely cleared out, while others had been reduced to a hodgepodge of comics, graphic novels, and toys. A few cabinets still contained a fair amount of older issues, which eleventh hour shoppers meticulously picked through. The crowd was a mix of sullen Meltdown regulars, and bargain hunters who’d come for the half-off deals.

Meltdown had been in operation as a brick and mortar comic book shop for 25 years. News of the imminent closing broke when Meltdown founder Gaston Dominguez-Letelier made an announcement post on the shop’s now defunct blog. Friday, March 30 would be the very last day at Meltdown. Of course, it was more than just the closing of a comic shop.

For the last several years, the Nerdmelt Showroom in the back also offered a chance for writers, comedians, podcasters, and artists to practice and perform their craft. This is where Kumail Nanjiani and Johan Ray ran their Wednesday stand-up show from 2010 to 2016. Nanjiani would go on to star in HBO’s Silicon Valley and receive an Academy Award nomination for The Big Sick, which he wrote with his wife and Meltdown producer Emily V. Gordon. It’s also where one might go for Stonecutters LA Simpsons Trivia or the Nerdist Writer’s Panel, where aspiring film and TV writers could learn tips from working Hollywood screenwriters.

“It was thanks to NerdMelt and Meltdown Comics that I made the cross-country leap from New York to Los Angeles,” Lyssa Mandel, co-host of talk show The Bitch Seat told We Like L.A. “A stage behind a comics and collectibles shop was the perfect home for The Bitch Seat, my therapy/comedy talk show about adolescence. Magic.”

“Tom got to ask a ‘what if you were put in charge of your own Star Trek series’ question (before [Fuller] was put in charge of his own Star Trek), and I got to tell him that Pushing Daisies is what inspired me to write for the screen. None of that would have been possible without Meltdown providing such a perfect avenue for writers and fans to connect up,” Luery Shaw said.

I personally enjoyed catching Horrible Movie Night, run by husband-and-wife team John Mathot and Susan Wright. Each time, they’d screen a terrible film with interludes from comedians. Guests were invited to yell out jokes, MST3K-style, and the best jokes of the night would win prizes. The first time I met the couple, they told me about their show, and I made it a point to attend as often as I could thereafter. Even though they held their last show in March of 2017, Wright referred to the closure as “a horrible turn of events.”

“Meltdown was a wonderful, nurturing home for an oddball show like Horrible Movie Night,” Mathot said. “They encouraged and supported us by letting us take chances, and it made us a better show. We met so many great employees, comedians, and fans—many of whom became friends.” 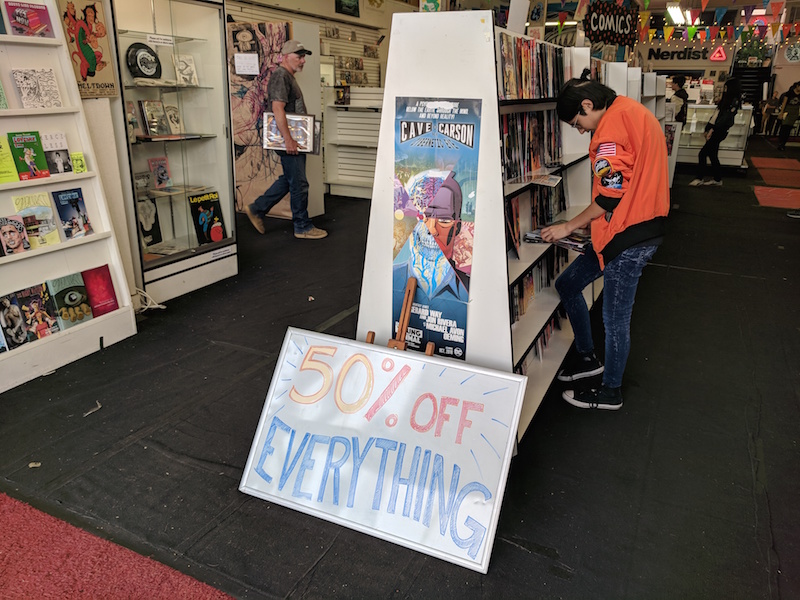 Among the customers who trickled in and out on Friday afternoon was Matt Wilkie, a comedy writer who donned a yellow crown, familiar to Archie fans as Jughead Jones’ trademark cap, for the occasion.

“I started coming here when I moved to L.A. six years ago and it’s been my regular shop ever since,” Wilkie said. “I’ve taken classes for writing here, and had a [subscription] box every week. I’m sad to see it go.”

Wilkie hadn’t picked a new shop yet, and neither had customer Tyler Mumford. Mumford works in IT at a nearby location, and said that even though Meltdown wasn’t on his commute, he would still stop by a couple times a week to make sure it was still there. A long-time comic book fan, particularly of “the whole gamut of Marvel,” he looked around the shop’s sparse shelves and said, “I wish I could take the whole store.”

Mumford said he might start shopping for comics in the Valley, “but it’s not the same. I like the vibe [at Meltdown], where I can see other comic book readers and sci-fi junkies like me.”

John Baxter, a regular for the past six years, said he had come to reminisce about all the comic books he’d purchased at Meltdown.

“They have everything that’s old school, but Marvel and DC stuff is always my favorite. I was just shocked because [Meltdown was] one of the last comic book stories in L.A. to have print and not digital,” he said. “The irony is that when Infinity War comes out, which is going to be a culmination of all these comic book heroes and movies, this would be a place that geeks would have loved to go, and it’s not going to be here.” 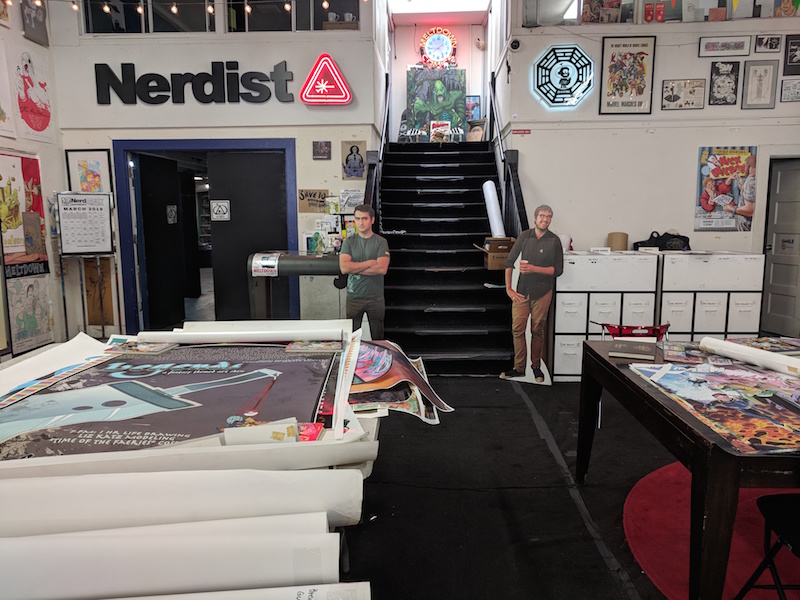 The Nerdmelt Showroom was a launching point for many comedians and writers. Photo: Juliet Bennett Rylah

Pat Forrester, a comedy writer who once wrote an episode of Boy Meets World, was a fan of the Nerdmelt Showroom. She and a friend stopped by to browse the shelves a final time.

Actor and cosplay queen Maitland Ward, who, coincidentally, starred as Rachel McGuire in Boy Meets World, dropped by with photographer David Edwards. Notably, Ward was clad in the costume Princess Leia wears in Return of the Jedi when held captive by Jabba the Hutt. Edwards explained that four years ago, he had asked Ward to do a cosplay shoot in that very costume. She agreed, and Edwards called Meltdown and asked for permission to do the shoot there. That was Ward’s first time doing cosplay, but she’s since racked up thousands of followers on social media and regularly attends comic book conventions.

“It all started here, which is why we came back with the same costume today,” Edwards said.

Behind the counter, general manager Francisco Dominguez helmed the cash register and chatted with customers.

“It’s a sad state,” he said. “I’m going to miss all the faces that we’ve come to know and the friends we’ve made and the events we’ve planned—all that these walls hold. It’s sad; all brick and mortar is going away.”

Dominguez’s advice for any Meltdown fans wondering where to go now: “Keep supporting the arts, and the little hubs like this that are still floating around.”