Where to See Life-Size Gingerbread Houses in Los Angeles

What do cannibals and Christmas have in common? Think gingerbread.

In 1812 Jacob and Wilhelm Grimm published one of their most famous stories. Hansel and Gretel are left to stave in the woods by their cruel mother as their woodcutter father is unable to provide for the family. The children search for home and come upon a house built cakes, candy and gingerbread. The proprietor turns out to be an evil witch who lures them inside with the intention of eating them. Ultimately the children trick the witch, trap her in the oven she’d warmed for them, make off with her fortune, and return to their loving father. The mother, who died a mysterious death in the children’s absence, is now out of the picture for good. The surviving trio lives happily ever after.

Now you might think that the popularity of this macabre tale is what solidified the gingerbread house as a cultural symbol of Christmas, but that’s just a part of the origin. Gingerbread itself had been around for centuries preceding Hansel & Gretel. Europeans had long used the spiced bread to create artistically shaped cookies, elaborately decorated with icing.  In Germany, bakers had been constructing little houses out of gingerbread since at least the 16th century, according to food historian Tori Avey, particularly around the holidays. The 19th century fairytale only enhanced the gingerbread house’s existing popularity and today they’re a ubiquitous harbinger of Christmas cheer.

As hotels and malls have worked to outshine their rivals in gingerbread house construction, some houses have gotten larger and larger to the point where the average adult can comfortably stroll inside. Contained within you’ll find no evil witches, just delicious, seasonal cheer. And you don’t have wander through the woods of Germany to find life-size gingerbread creations. In fact there are a few you can check out right here in Southern California.

Let’s a take a look.

At the Beverly Wilshire a life-size, 8-by-12-foot gingerbread house can be found in the lobby. The house’s skeleton is made from wood, but the entire structure is covered in gingerbread made at the hotel, all cut and rolled by hand. To make this much gingerbread, Executive Pastry Chef Chris Ford and company started baking in August. Construction of the house took another three weeks. The house is brushed with gold dust, and the doors and windows are painted with chocolate. Over 1,000 gingerbread cookies have been fixed to the walls—some brightened with red, green, or white fondant. The roof is made out of 40 gallons marshmallow, which presents the illusion of a snow-topped cabin. As one might imagine, it smells pretty good inside. Its purpose throughout the holidays is a gift shop, open daily from 11 a.m. to 7 p.m. Here, one will find a variety of confectionary treats including chocolate trees filled with fillings, chocolate truffles, and emoji gingerbread men. -> More information 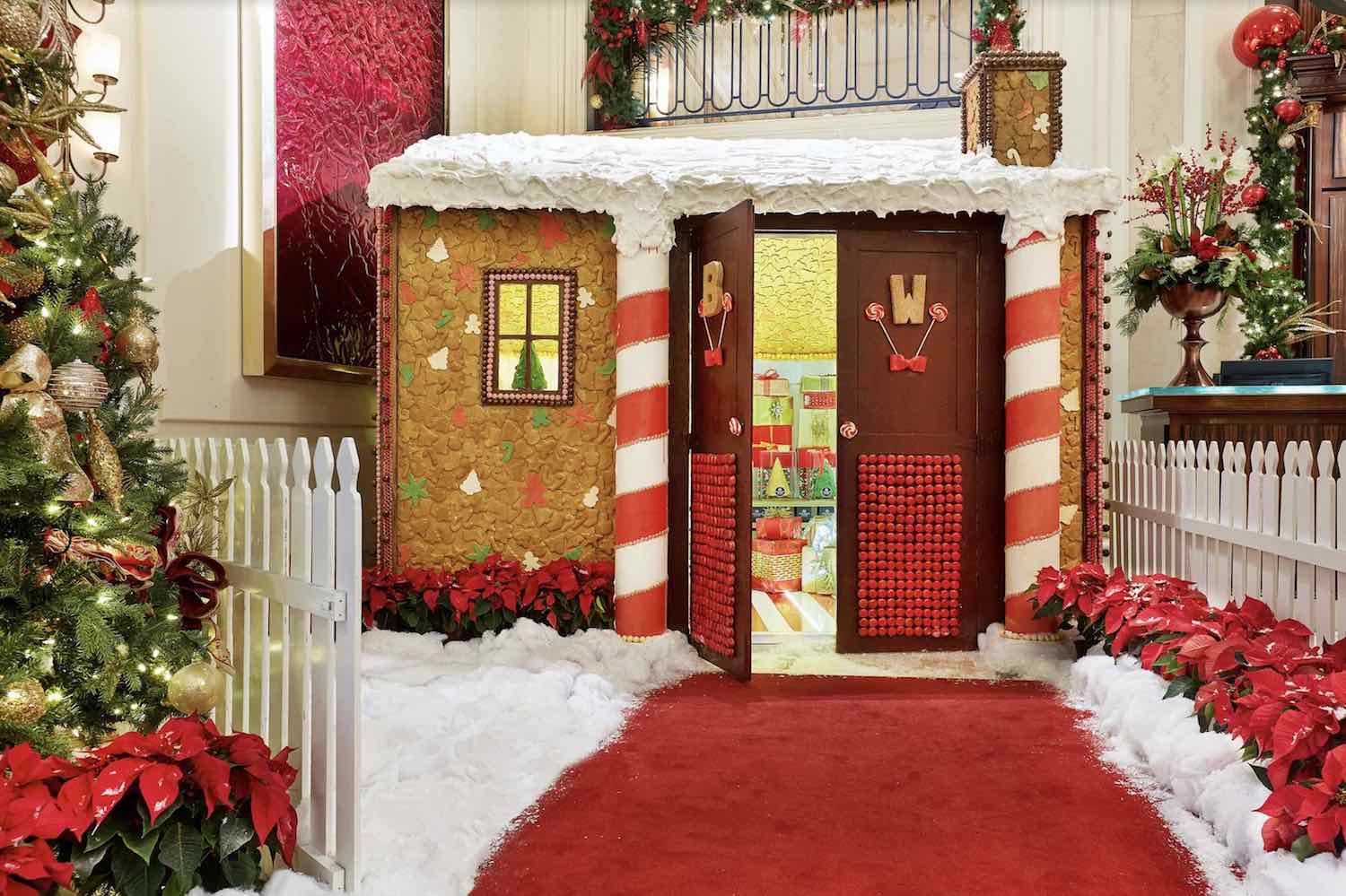 Over at the JW Marriott L.A. LIVE, another gingerbread house stands to rival the Beverly Wilshire’s. The open-faced “Santa’s Tavern” smells equally delicious and has a bar where cocktail tastings occur daily from 4 to 5 p.m. (I had a gingerbread mule, and can report it is tasty.) Pastry Chef Alex Vacher has used some 1,300 pounds of dough to create this holiday oasis, bedazzled with dozens of cookies and icing piping. A small lounge adjacent to the bar has an electric fireplace, hung with stockings. A TV behind the bar plays holiday classics. It’s so adorable, even the Scroogiest of Scrooges will find themselves impressed by the 1,200 hours of work that went into this festive lodge. Santa’s Tavern is open through January 2. -> More information 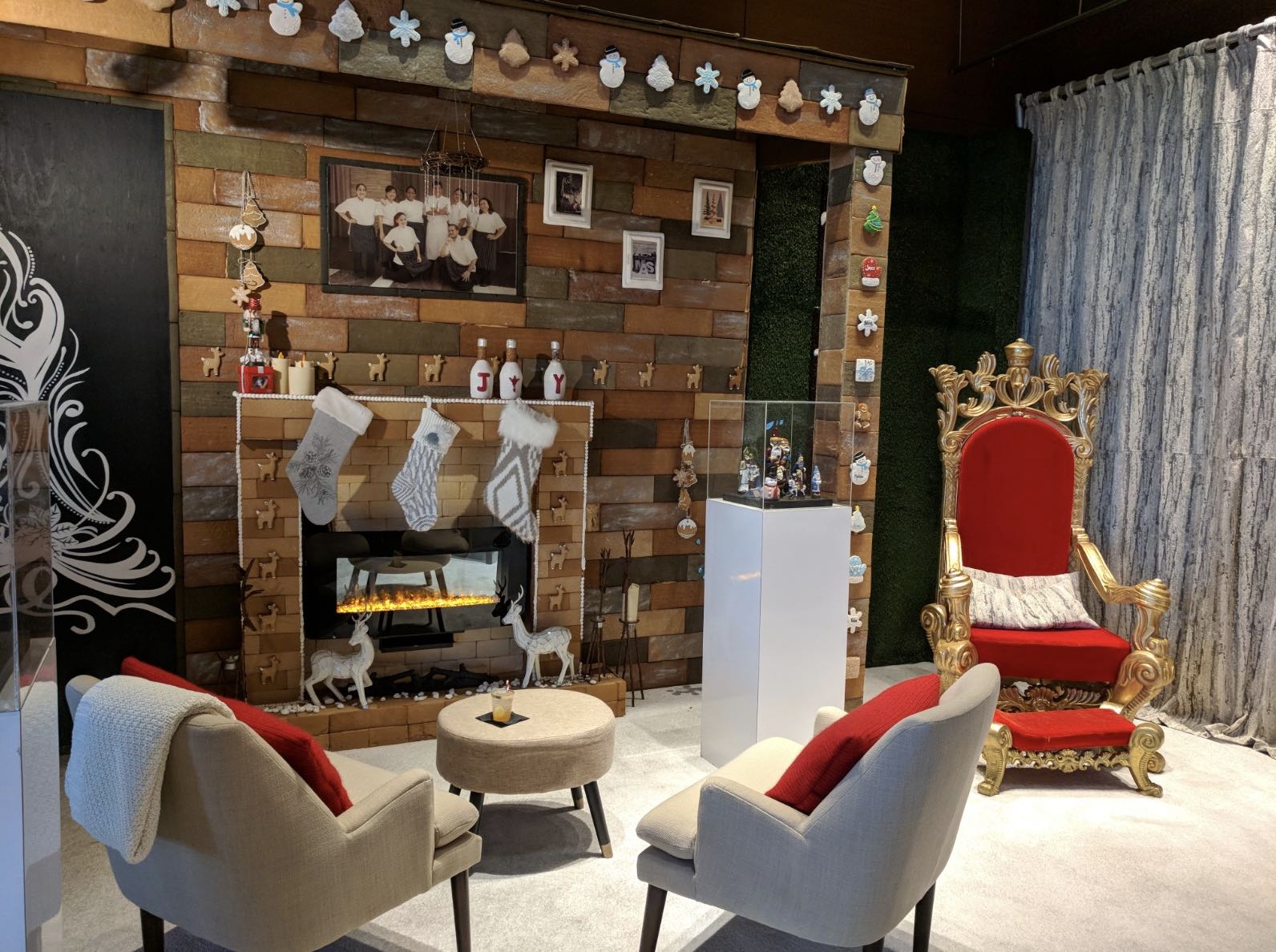 The Great Wolf Lodge in Anaheim also has a life-size gingerbread house, up until December 31. The house is comprised of 663 pounds of dough, 50 pounds of icing, and 135 pounds of candy. It also sits up to 10 guests at a time for a sit-down meal. Reservations are currently sold out, though day-of cancellations may open up new spots. They require a $10 fee, which will be donated to Ronald McDonald House Charities, plus the cost of food. -> Great Wolf Lodge

Outside of L.A., there’s also a life-size gingerbread houses in Madison Square Park in Manhattan, while Fairmont Hotel in San Francisco boasts the largest in the state with their two-story house, complete with a dining room that seats up to 12 guests. The record for the largest gingerbread house, however, was set in 2013 in Bryan, Texas, where it seems like I’ve heard everything is bigger. This house, which came in at 39,202 cubic feet, broke the previous record held by the Mall of America in Minnesota.