Is Living in L.A. Without a Car Possible? Yes, But…

I have fond memories of a loft I used to rent in downtown Long Beach. Big windows that let sunshine in like a waterfall. A quasi-decent view of the city to the south.  And best all? Traffic was a thing of the past.

Now, keep in mind it’s not that I didn’t have a car during my time in the LBC, but rather there were two underlying factors that allowed me to decrease my auto’s usage by close to 90%.

One, I was working from home. No commute. Boom. Done.

And two, I literally had everything (from a living necessities P.O.V.) I needed within a third of a mile from my apartment. Walk to the bank or the bar or the grocer. Walkscore.com rating of 92, baby. It was absolutely glorious.

I guess this brings me to a question that I see pop up from time to time on Reddit threads and in Twitter convos…. do you need a car to get by in L.A.? Can you live in Los Angeles, the most automobile centric city in the country, without said automobile?

The short answer is yes… but. And the “but” highlights several important considerations you need to examine before deciding to go car-free in the city of angels. 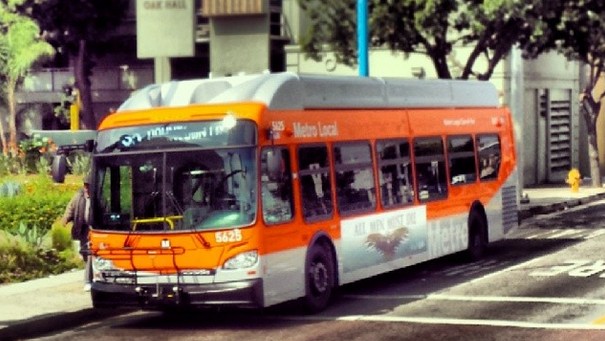 The maxim of live close to your work is important on it’s own merit in L.A. because of traffic and general urban sprawl, but when you don’t even have a car, this gets amplified even more.

Public transit options are existent, but not exhaustive in Los Angeles. If you happen to work and live right next to Metro stops or convenient bus routes, you’re ahead of the game. Or if like me you have a job that allows you to walk to work (in my case, my home office) then that’s a major factor on the “pro” side of going car-free.

But if you live Santa Monica and need to commute to Studio City, well….

2. Living in a Walkable / Bike-Friendly Neighborhood

One of the great things about living in DTLB was that I was literally a stone’s throw away from multiple coffee shops, grocery stores, restaurants, bars, dry-cleaners, and other essential businesses that I could walk to in less than 15 minutes. This meant even though I had a car, I literally would never even start the engine to keep my life going on cruise control (yay car pun).

Not all neighborhoods (indeed most in L.A.) supply this kind of access and versatility. And if you decide you want to take the bus or the Metro to do your grocery shopping, you need to reckon with the level of relative inconvenience that lifestyle affords.

Want to know how walkable or bike friendly a neighborhood is? Walkscore.com is a great place to start.

If you’re leasing or paying off a loan on a car, then deducting the monthlies on that will be saving you potentially thousands of dollars every year. Still, public transit isn’t free and a 30-day Metro pass according to their updated September 15th, 2014 rates will cost $100 per month.

There may also be costs like a bike purchase, bike maintenance, or special one-time Lyft or Uber ride purchases that steal money away from the car-savings piggy bank.

The costs will be different for everyone depending on your commute, distance, and mode of transit, but they all need to be weighed to make an informed decision on potentially going car-free.

4.  Truth: There are Limitations

On one occasion during my Long Beach tenure I decided to take a trip on the Metro Blue Line, and then a bus transfer to get to the L.A. Zoo. It took almost two hours… each way. Consider that versus what would’ve been about 90 minutes round trip on any normal Saturday. And if I had wanted to take public transit to get to someplace like Malibu? Forget about it.

Things like spur of the moment happy hours, weeknight BBQs or even a simple dinner with friends can become extremely hard to attend. What used to be a straight forward point A to point B exercise now becomes a major production.

The truth is there are multiple neighborhoods in L.A. where it’s possible to live sustainably without a car, it’s just that you very well might get pigeonholed in that ‘hood and not have as much opportunity to explore the entirety of the city. And that’s ok for some. Sometimes limitation is a good thing.

Take for example the account of Stevie St. John who spun the car-free story in a positive direction via a piece for the L.A. Weekly. Although at first it was a hard adjustment not having the convenience of a car, she found that the lifestyle evolved into something suitably simpler:

“…simplifying felt good. Walking and biking added exercise to my day. Reducing my transportation expenses allowed me to pay off my credit card debt. I started to spend more time in my own neighborhood, and really enjoy what it has to offer.”

I guess it’s like De Niro says in Heat, “there is a flipside to that coin, my friend” (points for random Heat reference).

So can you live in L.A. without a car? Well, of course you can… but. And that ‘but’ is big. Like really big. Like Sir Mix-A-Lot big. And so it looms…

Furthermore, the whole ‘yes… but’ response may not definitively answer the question for some, so I guess I will leave you with this:

If I had to choose any neighborhood to live in L.A. without a car, it would be downtown. Not only would I be at the center of the transit hub, but it completely meets my requirements of walkability along with access to entertainment/services. Also, parking in downtown is EXPENSIVE.

Then again, EVERYTHING in downtown is expensive (hello: gentrification) so maybe that would just offset the car-free savings anyway.

Ultimately, everyone has priorities and their own perspective, whether it be costs, the environment, or just desiring a life that doesn’t involve hours upon hours behind the wheel.

Hopefully the few thoughts I’ve laid out above help you find your own opinion on the matter.

Are you living car-free in L.A.? Considering it? Let us know your thoughts in the comments below.