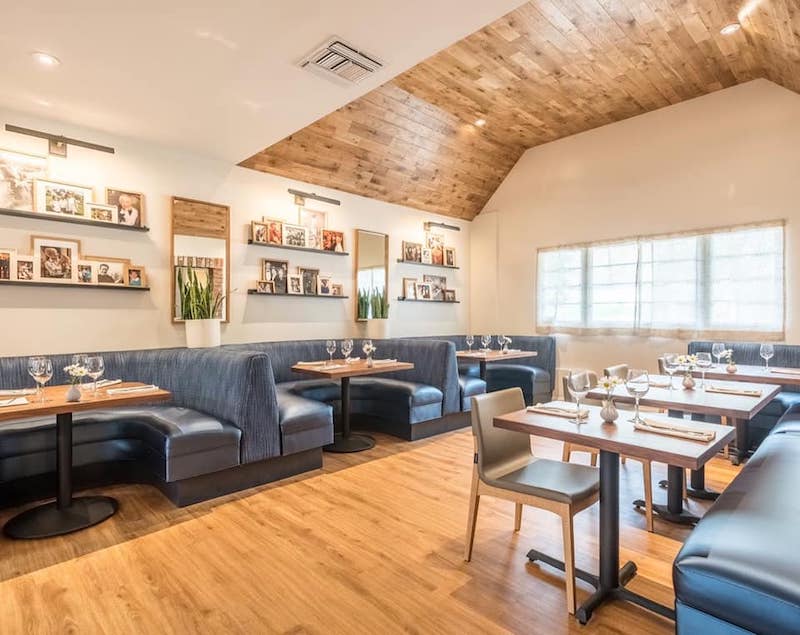 Some may remember Leah Adler as the mother of filmmaker Steven Spielberg. But to those who frequented The Milky Way, her kosher restaurant on Pico in Pico-Robertson, Adler was famous for her love of new flavors, including those unfamiliar to kosher diets. Though the restaurant closed for several months following Adler’s death in 2017, it’s back with a fresh revamp that maintains her bright spirit while introducing a new generation to Adler’s enduring hospitality.

Prior to becoming a restauranteur, the Ohio-born Adler, known to loved ones as LeeLee, was an accomplished concert pianist. She married Arnold Spielberg in 1945, with whom she had four children: Steven, Anne, Sue, and Nancy. The couple later divorced and Adler remarried Bernie Adler in 1967. The pair moved to Los Angeles and, in 1977, opened The Milky Way.

“When my mom and my stepfather…decided to venture into the restaurant business, their initial purpose was to provide a dining experience to L.A.’s Kosher community who had never tried internationally inspired food,” Nancy Spielberg said via a statement.

For those unfamiliar with kosher regulations, Spielberg offers an explainer. A crucial rule is that meat and milk must never mix, so kosher restaurants will typically choose to be either a meat restaurant or a dairy restaurant. The Milky Way is a dairy restaurant, meaning that they serve no meat except for fish, which may be eaten with dairy. Ingredients that are neither meat nor milk—dried goods, vegetables, etc.—are known as pareve. All ingredients, regardless of which category they belong to, must have certification from a kosher establishment.

The Milky Way also employs a mashgiach, who oversees everything that goes on in the kitchen to ensure its kashrut status. Additionally, the restaurant does no business whatsoever on the Sabbath.

Adler’s restaurant was unique in that it didn’t just serve common kosher foods like potato pancakes, but would also offer chimichangas, guacamole and chips, and other items unlikely to be found at any of her competitor’s establishments. 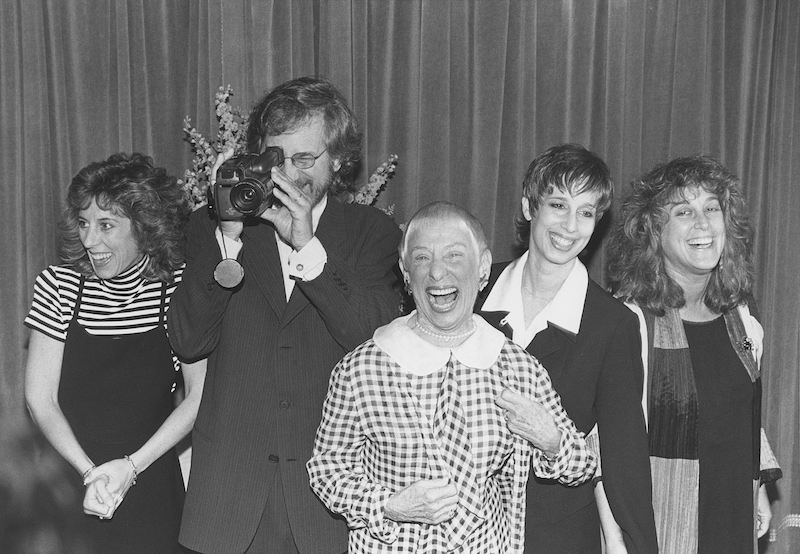 (L to R) Nancy Spielberg, Steven Spielberg, Leah Adler, Sue Spielberg, and Anne Spielberg. Adler was honored with a ‘Mother of the Year’ Award at the annual Mother’s Day luncheon by Cedars Sinai’s The Helping Hand. May 5, 1995. Photo: Courtesy of The Milky Way

Spielberg said her mother would work at the restaurant six days a week. She and her siblings would sit with Alder at the Milky Way’s corner table “to share our joys and our woes, hear her sage (yet unusual) advice, and just be in her presence.” As time went on, Spielberg began to also see the Milky Way as a means of giving back to their Jewish community by providing a rare service: “a great gathering place serving globally-inspired food that adhered to strict kosher regulations.”

It was that gathering place that Adler’s family didn’t want to lose, even after Adler herself passed away in 2017 at 97.

“She had her regular guests, her dear friends, and her large family, all of whom cared a great deal for the restaurant. We wanted to continue her desire to feed her people and to honor her legacy by bringing the Milky Way back to the local community,” Spielberg said.

The family connected with Phil Kastel of PK&J Hospitality Group (Public School, The Grill on the Alley) and together collaborated on the revamp.

The restaurant itself has been renovated in shades of blue—a color loved by Adler—by Jen Smith of Untitled Interiors, who previously worked with Kastel on several Public School restaurants. Wood floors replace carpeting. Large, half-moon booths continue to line one wall, but they’ve all been reupholstered and fitted with new cushions. Opposite, banquettes now allow for larger parties to be served. Throughout the space, guests will find family memorabilia, including photos, watercolors painted by Adler, and knick-knacks from Steven Spielberg films.

“You might be eating and look left and see a little picture of E.T.,” Kastel said.

And in one corner, on a patch of the old carpeting, guests can sit on a bench and watch a four-minute looped video of Adler as she was.

“People love it because she still kind of lives in the restaurant,” Kastel said.

A returning classic, Leah's Cheese Blintzes are one of our favorite ways to start a meal.

When it came to the menu, it was important to keep beloved items for regulars, but to also add or update dishes to appeal to modern palates.

“It took a lot of time and discussion with the family and close friends of the family [as to] what items are special and very dear to their heart, what reminded them of their mother, and what people used to come to the Milky Way for,” Kastel said.

Once the existing menu had been pared down to about 40 favorite items, Kastel asked the kitchen to make every single one of them. Many stayed the same or with only minor changes. The salmon puffs—crispy pockets filled with cured salmon, cream cheese, scallions, and fresh herbs—were made slightly larger and the sauce was changed from tartar to a remoulade. The halibut chowder was once only served on Fridays, the day the restaurant closes early. Kastel made some modifications to the soup and decided to serve it daily. When it came to the signature cheese blintzes, Kastel didn’t change a thing.

Kastel did add an Impossible Burger to the menu which, because it’s a vegetarian patty, can be served with a slice of cheese. Elsewhere on the menu, diners will find a Cajun Pacific snapper entree, fish & chips, an Ahi tuna burger, and several pasta dishes, including fettuccini with wild mushrooms and artichoke hearts. Guests can enjoy their meals with a selection of kosher wines and beer. 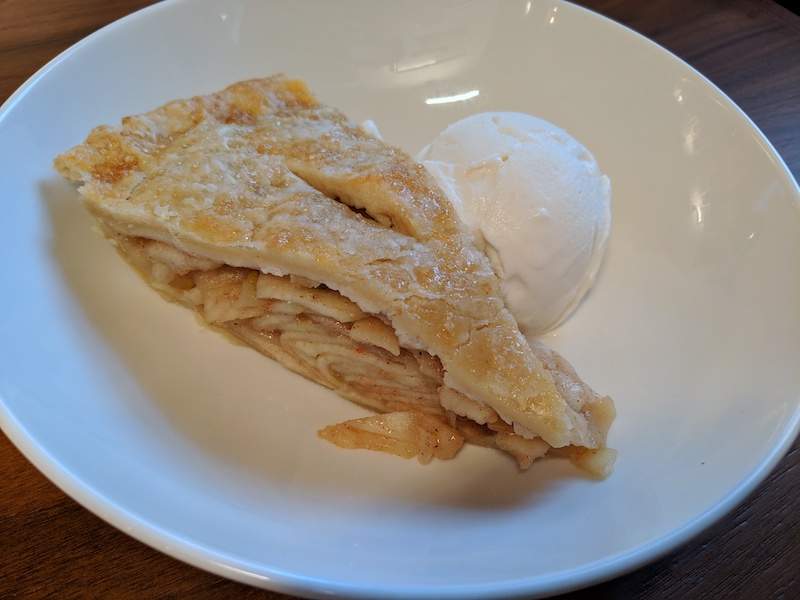 For dessert, guests can choose a slice of cheesecake or perhaps the Apple Dream Pie, which comes served à la mode. The name comes from a dream Nancy Spielberg had in which her mother ordered a slice of apple pie with pepper sprinkled on the vanilla ice cream. The story of that dream stuck with Kastel, who began trying to think of a way to add pepper to the staple dessert.

“I found sweet peppercorns, which are naturally very floral but not spicy like black peppercorn,” he said. “I crush them up and put them in the caramel sauce.”

It’s subtle but brings a slight kick to the pie that’s sweeter if you know the story—and the woman—behind it.